5 Storylines to Watch at the 2018 Jr Pan Pacific Championships 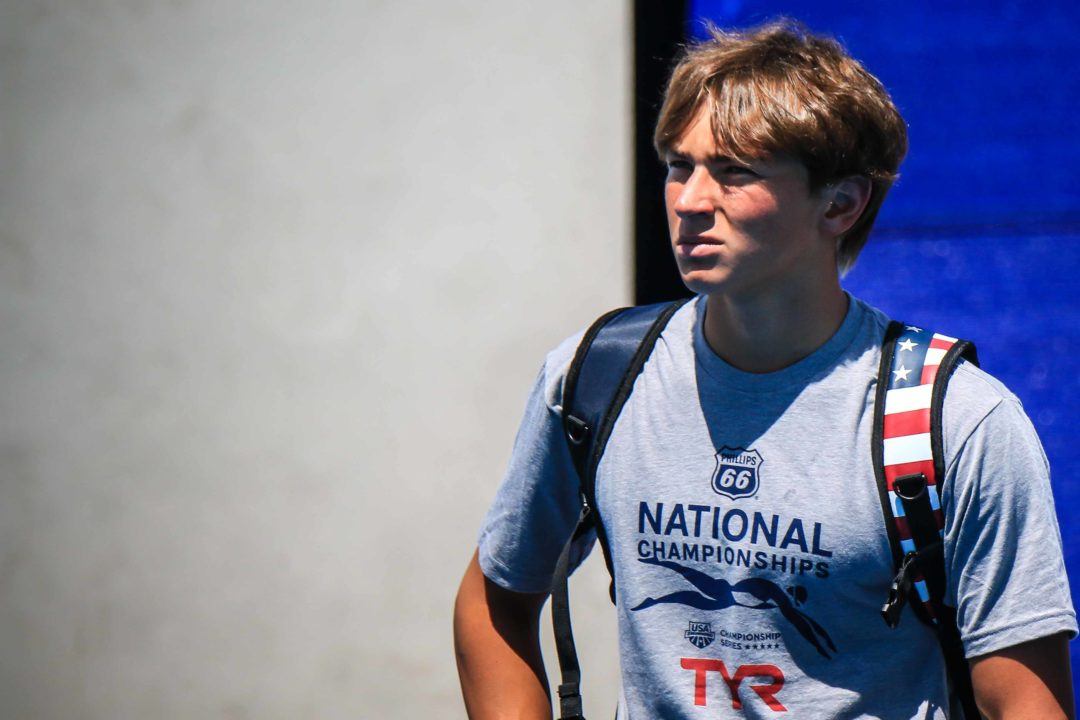 Luca Urlando is a real threat to Michael Phelps' 15-16 NAG record in the 200 fly. Archive photo via Jack Spitser

The 2018 Junior Pan Pacific Swimming Championships are coming up this week, as some of the top teenagers from the U.S., Japan, Canada, Australia, and more will go head-to-head in one of the premier junior international meets of the year. Below, we delve into five (of many) storylines to watch for at the meet.

Countries are allowed to enter as many swimmers as they want in preliminaries (up to the roster caps of 20 women and 20 men), meaning that swimmers will often race more events than just what they explicitly qualified in.

#1 SIBLINGS READY TO TAKE OVER

Alex and Gretchen Walsh of Nashville Aquatic Club and Jake and Carson Foster of the Mason Manta Rays are favorites to take multiple events this week.

The legendary Sippy Woodhead‘s 13-14 NAG records in the 200m and 400m free just turned 40 years old, dating back to the 1978 World Championships where the then-fourteen-year-old took gold in the 200 and silver in the 400.

The U.S. has always been a force in the backstrokes, and it’s the age group talent on the women’s side that has been remarkable of late. Even without Regan Smith, World Jr record holder in both the 100 and 200 backstrokes, the U.S. holds the top 5 spots in the 200 back and the top 4 spots in the 100.

Canada’s Maggie MacNeil, who will suit up as a freshman for the University of Michigan this school year, notably declined her invitation to the 2018 Pan Pacs. She commented that she’d be focusing on Jr Pan Pacs instead, and she now has a window to a gold medal with her top-entry time of 58.44 in the 100 fly. The closest entrant to MacNeil is Australia’s Michaela Ryan at 58.96, and this is one of the few events in which an American isn’t the favorite (or very close — 59.19 is top American Lillie Nordmann‘s entry time).

#5 URLANDO WITH A SHOT TO SNIPE A PHELPS NAG

Luca Urlando hung tough with the older guys in the 200 fly at U.S. Nationals, ultimately coming up just short of qualifying for Pan Pacs in the 200 fly. The sixteen-year-old’s 1:55.21 was still the second-best U.S. 15-16 200 fly of all time behind only Michael Phelps, and that magical NAG is within reach at 1:54.58.

So if anyone swims faster here than those in National/Pan Pac, they are still not on the Worlds team next year?! Seems unfair to these young talents who are improving at a phenomenal pace. How about Pan Am?

you can’t qualify for any major teams at jr pan pacs, the only selection meet for teams was nationals.

That’s the nature of an early selection criteria…there is always a chance someone faster will emerge, or that someone already qualified will have a major “off” season. On the flip side, you want people who are ready to perform on the biggest stages…someone who wins at Nationals usually meets that requirement.

hmmm…maybe they should have swum faster at NATS.

Swimmers that step up at NATS prove they can handle a big stage (like the World Championships).

How about we congratulate these kids for performing well at Nationals and making the Junior team. They still have a shot at the National Team based off of their performances in Fiji. GO USA!

It will be interesting to see what Tuggle has in the tank for this week. It seems like at both Sr and Jr Nationals, her stongest performances came in the morning sessions. She had solid, but not great finals (finishing slightly behind most of her morning times). I’d be curious to see what her training will be like going to Jr Pan Pacs, with such a busy summer schedule and the start of school coming.

It’s becoming abundantly clear that we should’ve written an article that was 52 storylines to watch at the 2018 Jr. Pan Pacific Championships.

My apologies to all that we’ve offended by limiting it to 5: a number that we thought would be easier to digest by our audience.

Appreciate the sarcasm but I am pretty sure #1 seed in three events that is close to breaking a record might land a little better than top 52. It’s all good. Go USA Junior Nat!

@cincyswim I agree with you but I appreciate your post as I will now be watching for Mariah now that you’ve brought her to my attention. I hope she gets those gold medals and maybe even the Jr world record!

You see, there are at least seven persons (12:30pm) who are thankful to swimswam for not overloading their digestive abilities. 😀

We know Carson Foster will be in the mix for the podium in his regular events, 2 BK, 2 FR, 2 IM — but be ready for a big drop in 4 IM, he has not swam that tapered at a big meet in a year plus, 4:17 lows or better is not out of the question

I’m a little sad to see my first major Junior meet without Michael Andrew. Even so, this is going to be very exciting. So many stars in the making here. In six years we’ll be seeing some of them on the Olympic podium.

Maybe even sooner than that! I could see some of them potentially pushing for relay spots in 2020.

NAG records would be icing on the cake. More important is to perform at your best and win the races you are favorite to win.
On paper that US team is one of the best ever sent at junior pan pacs with Claire Tuggle, Phoebe Bacon, Isabelle Stadden, Mariah Denigan, Luca Urlando, Walsh sisters, Carson Foster, Emily Weiss or Destin Lasco. I see only Joshua Matheny as missing piece after his 1.01.06 in the 100 breast at US juniors. Hopefully these teens still have gas after a long summer. I want to see them peak at the right time. Have fun and bring home gold medals.

Why did you leave Jake Foster out?

“Bacon was cooking at Nationals earlier this summer”

That joke hurt me lol

I can’t believe I missed that.

Let’s not forget Ross Dant in the distance events. The kid is tough.

17
-8
Reply
BrettonRouge
Reply to  Sammy Save Up

Dang, that’s some expert analysis! Showing the kind of deep insights that only a club coach or a mother could share with us. Thanks for your valuable contribution to this thread.