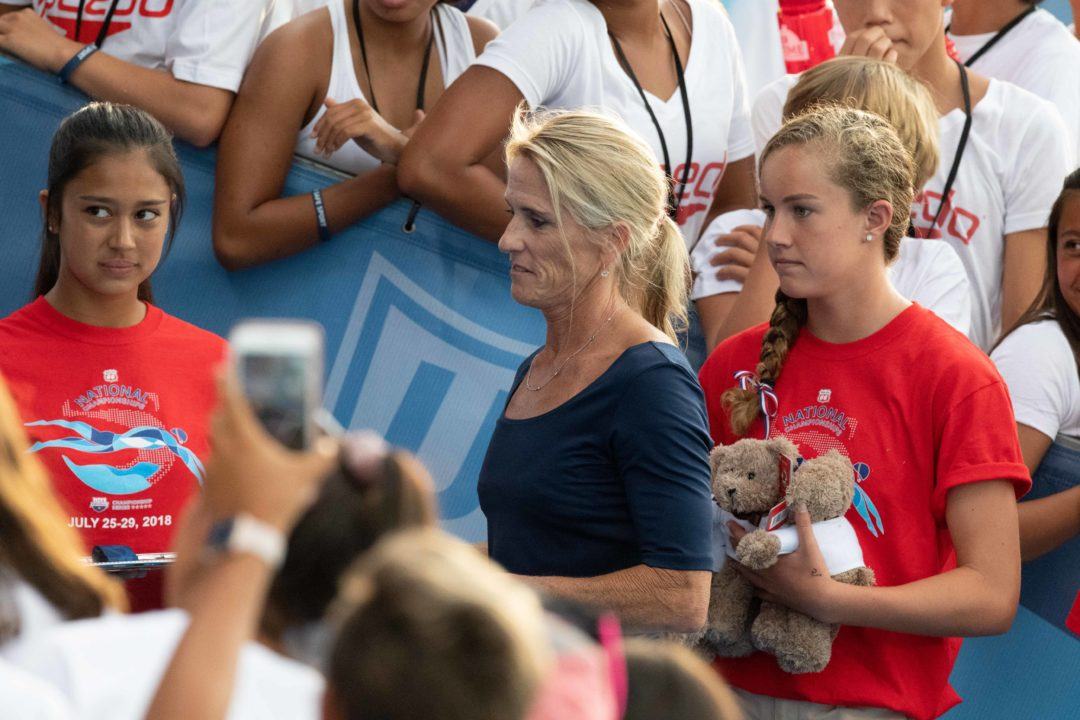 This week, the oldest USA Swimming National Age Group Record for girls will turn 40, an almost-unfathomable feat, given the rate at which the sport in general has improved since then.

The 200 free will officially hit its 40th birthday on Wednesday, August 22nd, while the 400 free hit its birthday on Friday, August 24th. In that 400 free, Woodhead lost to Australian Tracey Wickham, who wasn’t much older: only 15.

At the time, Woodhead’s 200 free was a new World Record, as was Wickham’s winning 400 free. While that global standard has come down by 5-and-a-half seconds in the 200 and almost 10 seconds in the 400, no American swimmer has yet been faster before her 15th birthday.

The late 1970s and early 1980s were a golden era of sorts for young American female swimmers. Besides her, that 1978 World Championship team had a 15-year old Tracy Caulkins win 5 gold medals, and not long after, a young Mary T. Meagher would put up teenage times that also stand untouched to this day.

Even in a rubber suit, Missy Franklin, who in spite of her current battles with injury is and was one of the best teenage swimmers in history and the 15-16 record holder, couldn’t get Woodhead’s mark.

Woodhead’s records are just now becoming in danger again, with Claire Tuggle‘s 1:58.59 from US Nationals now just .06 seconds a way from the record. Tuggle doesn’t turn 15 until July of next year, so there’s a very real chance that the 200 won’t survive to its 41st anniversary.

On average, long course records are much older than their short course equivalents, probably due to the advancements in underwater swimming having a bigger impact on short course racing than long course. The oldest SCY national age group record still standing is Mary T.’s 1981 mark of 1:52.99 in the 200 yard fly.

The enormity of the mountains that these swimmers built that have, in many cases, yet to be climbed can’t help but make one wonder what they would have down with modern suits, goggles, nutrition, pool designs, and training techniques. Or, if there’s something from that generation that is lost, that doesn’t fit the mold of the 21st century athlete, be it the coaching style, or some other immeasurable quality that played into the hands of these young athletes, where they wouldn’t necessarily catch the same spark in a 2018 swim team.

Watch highlights from the meet, including the last 50 of Woodhead’s 200 free, below:

Whatever the case, this week, as the Jr. Pan Pac Championships kick off in Fiji, we can sit in awe, and imagine what it would’ve been like to see a 14-year old girl swim times that still qualify as world class today, but set in the late 1970s. The records will, eventually, be broken, but how long they’ve stood will always be remembered.

Anyone know what happened to remy fairweather? She was amazing a few years back but just disappeared after the 2014 CWG.

Tracey Wickham held the Australian record until 2007 in the 400fr. Her commonwealth games records didn’t go down until 2010 & 2014 either. It took Adlington and Carlin to break them. Incredible swimmer.

Tracey was a living legend after her 4:06 in Berlin.

As one of the swimmers mentioned in the article would like it be known my coach never had us do the volume of my West Coast competitors. More quality than pure miles. And there were many more swimmers competing longer races, including those who won gold medals in 200 races at the ‘76 Olympics (those being back and fly for Messrs. Naber and Bruner, respectively). Just a different time and focus. Challenge: 40 years is way too long for a record to still stand. Who will take them down? Hopefully we’ll find out soon!

What other swimmers through history – male or female- have been players in the 50 through the 1500 at the top 10 world rankings levels? Park Tae-hwan & Ian… Read more »

Did Sippy Woodhead break any other free WR apart from 200, and the 50 (which was newly recognized event where everyone broke the WR)?

You’re right, I missed it. That makes it Shane, Sippy &…? Both women were just incredible in their time.

Slippy held the American records from 100 meters/yards all the way to the 1650. She and Kim Linehan battled back and forth from the 400 meter to the 1500. Those two missed out on gold medals from 1980 and were never really the same afterwards. Kim still won the 1982 World Championship gold medal in the 800, but her overall dominance in the distance races had lost some of its shine.

11
0
Reply
Buckeyeboy
Reply to  He said What?

Some of the sets Kim Linehan did back in the day were absolutely legendary. She was a phenomenal trainer and voracious competitor all warapped in a 5’4” 120 pound body.