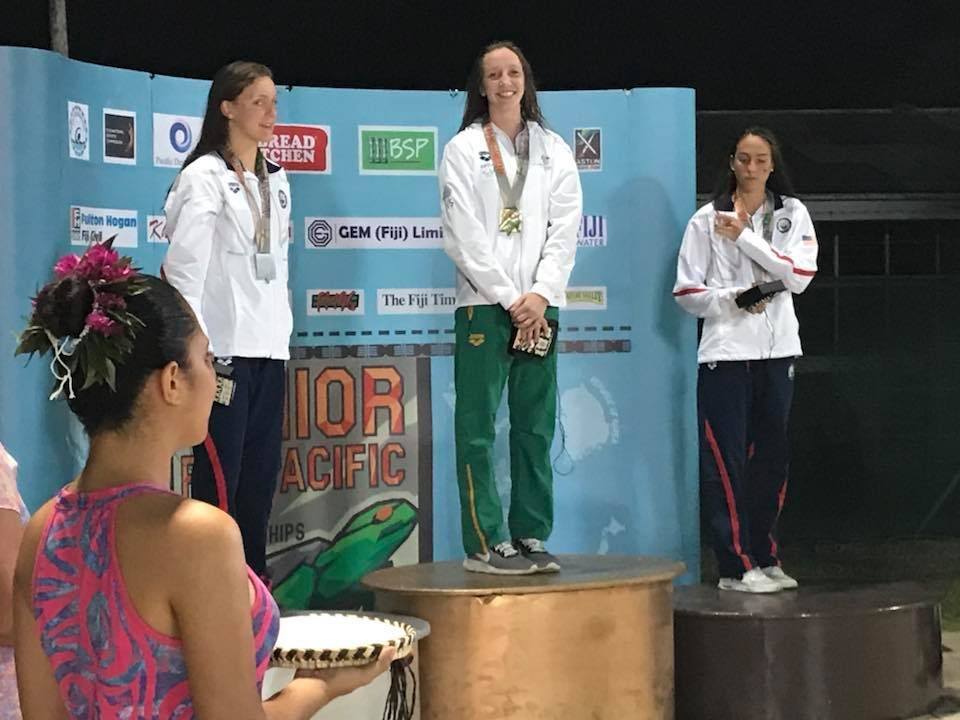 With golds in the 400, 800, and 1500 free, Australia’s Lani Pallister emerged as one of the brightest stars of the 2018 Junior Pan Pacs. Current photo via Ian Hanson

Australia’s Lani Pallister emerged as one of the brightest stars of the 2018 Junior Pan Pacific Swimming Championships in Fiji this weekend. She won gold medals in the 400 free, 800 free, and 1500 free, posting a meet record and the 17th-fastest time in the year this season in the latter. Back home in Australia her 1500 time ranks her among the nation’s all-time top-10, surpassing her mother, Olympian Janelle Elford (16:10.11). Elford, a two-time Olympic finalist, Commonwealth Games gold medalist and two-time Pan Pac champion in the 1500m freestyle, is now her coach and was on deck in Suva to witness her 16-year-old daughter’s breakthrough. In an interview with the Sunshine Coast Daily, Elford said, ““I’m just so proud of her, as a mum and as a coach; she has worked so hard and she really deserves it, just a wonderful feeling..I’m happy for her. The first night was a big night…. actually massive night. Silver in the 200m freestyle in a personal best and then gold in the 800m, the first time under 8.30. And to top it off the medals were presented by Aussie Team athlete Mentor Jodie Henry now Jodie Notting, a three 3-time Olympic gold medallist from 2004.”

Pallister represented Australia internationally for the first time last summer at the 2017 FINA Junior World Championships in Indianapolis. She placed 8th overall in the 1500 free with 16:32.59 (the fastest time out of the morning heats) and 10th overall in the 800 free with 8:39.86 (the second-fastest time from the slower heats). In April this year, she lit up Australian swimming by sweeping the freestyle events in the 15-year age group at National Age Titles in Sydney. Among her four gold medals was a National 15 record in the 200 free (1:59.37) that erased a mark previously set by Shayna Jack.

Pallister broke a 6-year-old meet record in the 1500 free, taking 3.9 seconds off Becca Mann’s mark from 2012. While both teenagers swam incredibly well-paced races, staying within a narrow band of 32.2s to 32.7s, you can see by the side-by-side splits below that Pallister attacked it earlier and was particularly strong on the middle 1/3 of the race.

Swims not included in the summary above:

The battle for bronze at Worlds and Olympics between Pallister, Titmus and others will be epic.

Bronze?
Who will win silver?

Obviously KL is so good she wins gold and silver!

Interesting that you think Wang, Quadarella, Pignatiallo, and Kesely will beat Titmus.

On the upper end of the distance spectrum, it would appear that Quadarella and Kesely have an endurance edge over Titmus. Titmus has overtrained for the 400 M race and has already posted pictures of herself getting acupuncture treatment on her shoulders, which means she could very well go the way of Jess Ashwood and other Australian distance swimmers.

I thought her mum Janelle Elford would have swum faster than 8;20

Despite Janet Evans, sub 8:20 was actually quite rare until fairly recently.

I was not able to find online any general information about Lani Pallister. Something like her height, weight, etc. I wasn’t able even find her date of birth. It is either I’m very clumsy online searcher or Lani Pallister is a secret Australian weapon and any information about her is highly classified.
Knowing some biological parameters may help with understanding what possibly can be expected from her in the future.
Someone may say that’s nonsense. But I remember very well when at age of eight me and three other my friends decided to enroll to the swimming group the coach told us that we should come with our percents. He wanted to look at them. His job security… Read more »

you just keep going on about her weight and her age, as thought that’s all there is to know. and we’ll keep voting you down.

If you go on Asian Games results website you will see that they provide this detailed information about swimmers. Why do you think they do it if it is useless.
Just click on the name of the swimmer. For example, see the information about Wang Jianjiahe who is older than Lani Pallistar by a few months only.
https://en.asiangames2018.id/athletes/athlete/WANG-Jianjiahe-3009432/
P.S. you can down vote or up vote – it is your right. But if you have different opinion or you have some different information to share it would be nice if you express it in the form of your comment rather than hiding behind this faceless voting system.

Instead of down voting give me at least her date of birth. Isn’t it a shame that the only thing that you probably know about this talented girl is that her mother was an Olympian.

There is a direct link to Ariane Titmus in Lani ‘ s short but outstanding cv . Not only that we have between 4&6 contenders for a sub 16.00 next year . This is highly pleasing for Australian distance afficiondos after several WJnr Champs fell to illness & injury & Olympic medal letdown .

Her mum was about 5′ 9 – 5 10 ./ 177cms redhead with a willowy build . Given that her father was also a versatile aqua/ strength/ aerobics competitor , I ‘d say Lani will be 177 + & maybe stronger than Janelle . This is evident already in her sprinting ability . Janelle was also a good 400 imer but Lani does not have the time to train that event . Lani trains with Janelle but 3x a week at the HPC at a nearby University under coach Chris Mooney ( along with Kaylee & Taylor McKeown & Jake Packard & the other 4x 200 gold medallist Mikayla Sheridan .The program consistently produces good 200 f swimmers. I think… Read more »

Very few Australian juniors have that much information online. She swam at Australian age nationals as a 15 year old in April, but was 16 by 16 June. Not sure exactly when in that date range her birthday is, but it’s only a span of 6 weeks.

Her parental pedigree explains a bit – both her parents were elite athletes, so it’s not totally surprising she’s a gifted athlete.

Janelle is 175cm tall. Lani is still shorter than her, but looks to have a fair bit of her height.

As far as projecting future success, t’s a pretty pointless question when you are talking about someone who is already a world-class swimmer. Even more pointless when you know her mother was an Olympian.

Have you ever noticed remarkable similarity between Ye Shiwen and Li Bingjie? Not only by physical parameters but by their exceptional ability to produce uniquely strong finish at the end of exhaustive race. That also is actually some of biological characteristic. After her controversial Olympic gold medal race in 400IM the performance of Ye Shiwen went sharply down. I won’t be surprised at all if same things happen to Li Bingjie since they share so much in common.

That will be interesting to see, although I think it has a lot more to do with race strategy than some “finishing gene.”

Her dob is 6 June 2002, according to this start list (second to last event)

So she is 16 actually. Nice to know, because after reading swimswam articles I got for some unexplainable reason an idea that she is 15 and is older than Claire Tuggle by one year only. She is practically as old as Li Bingjie (4/2002) and Wang JianJiahe (7/2002) who are leaders in senior competition at world level.
Step by step the picture about Lani Pallister and her place in swimming hierarchy becomes clearer.

I get the impression that you’re trying to diminish Pallister’s achievements for some reason? If she’s able to win three individual golds, and a silver, at a junior Pan Pacs, then she’ll be a force to be reckoned with in the near future, no matter how you look at it.

Whether she’s 15 or 16 is really not that important, since some girls enter puberty early, while others are slower to mature physically and might not fully “catch up” until they’re 18-19. You shouldn’t draw any major conclusions, solely based on a young swimmer’s age.

You got wrong impression. I just trying to understand who she is now and what possibly can be expected from her in the nearest future. And Olympic Games in Tokyo are already the near future.
If you can notice the majority of all discussions on this forum is about this simple things: predictions and expectations. Long term, short term, in college, after college, after getting pro etc, etc, etc. I’m not an exception. But to be more or less accurate one needs information. I was surprised that it’s hard to find such about Lani Pallister. If she is so promising young swimmer who is already 16 why so little attention is paid to this rising star?