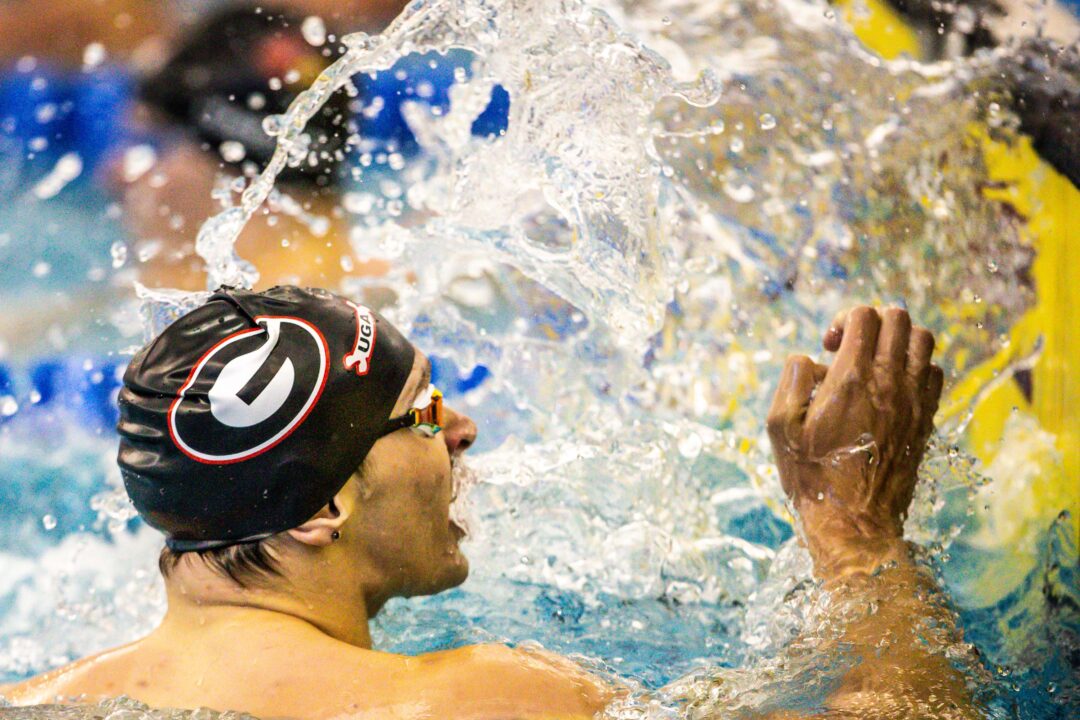 Despite concerns about the proximity of the US International Team Trials to the NCAA season, collegiate swimmers have been posting strong performances. Current photo via Jack Spitser/Spitser Photography

With day one of the 2022 US International Team Trials completed, it’s time to take a look at some of the biggest take-aways from the day.

With the US Trials meet falling relatively early in the calendar this year, there was some concern about how NCAA athletes would handle the quick turn-around between NCAAs and Trials. Well, it appears those concerns can be silenced, for the most part, as multiple NCAA athletes threw down big swims today.

First, Stanford freshman Regan Smith threw down a fast time of 2:07.93 in the women’s 200 butterfly to claim a spot on the US roster in an event that she also contested at the 2020 Olympic Games. Then, in the men’s event, UGA swimmer Luca Urlando dropped a huge performance to claim a spot on his first senior-level US International roster, backing up his runner-up finish from NCAAs. Notably, Cal’s Trenton Julian also made his first US roster with his runner-up performance in the same race.

Armstrong’s Ohio State teammate Charlie Clark also threw down a best time in the 1500 freestyle to claim a spot on his first US International roster.

However, there were a few notable “misses” throughout the day’s action. IU’s Brendan Burns missed the A-final in the 200 butterfly, despite winning the NCAA title in the short course version of the event last month. In addition, UVA sprinter Gretchen Walsh missed the A-final of the 100 freestyle, an event in which she’s the reigning World Junior Champion.

Overall, it’s fair to assume that the NCAA athletes handled transition fairly well. Though it is difficult to make assumptions this early in the meet, it’ll certainly be a storyline to follow.

The Florida Gators showed up to play. In 4 out of the 6 events contested tonight, Florida swimmers claimed spots on the World Championships Team, winning three of those races.

After qualifying first in prelims, Natalie Hinds followed up her 100 freestyle performance with a 4th place finish in the final, punching her ticket to Worlds in the process. Florida also saw superstar Caeleb Dressel claim the top spot in the men’s race, posting the world’s fastest time this season with his 47.79. Dressel came in almost a half-second ahead of the field in the process.

Then, in the distance races, Florida post-grads Katie Ledecky and Bobby Finke both managed to place first in their respective races. Ledecky, who is in her first season training at Florida under Anthony Nesty, posted her fastest 800 freestyle time since 2018 to win the event in a time of 8:09.27, the 6th fastest performance of all time. Finke, meanwhile, nearly downed the US Open record in the 1500 freestyle, only missing it by .2 to finish in a time of 14:45.72, which stands as the 3rd fastest time in the world this season.

Last year’s Olympic Trials meet saw a changing of the guard in many events, where swimmers who had previously been a staple on US rosters missed the Olympic Team. This was the case for Mallory Comerford, Ryan Held, and Leah Smith, all of whom claimed their spots on the US World Championships roster today.

Seems like just yesterday someone was commenting on how badly Huske died on her 100 fly in a local meet a couple weeks ago. Guess she and her coach knew what they were doing.

Comerford’s swims were so nice to see, however her spot is not guaranteed just yet. Just ask Ryan Held…

17 events and two relays means 17 first places plus 3 and 3 swimmers to form 4×100 and 4×200 relays. That is already 23 swimmers of allowed 26. So it isn’t enough for all 15 left second places plus #5 and #6 for each freestyle relays. The only hope that there would be enough swimmers that get qualified in more than one event: Ledecky, King, Smith, Huske, Flickinger…. So 16 swimmers are in pending status and #6 for relays are the last ones in the line. Don’t see how they can make it.
I hope my arithmetic is correct.

Durden was criticized (or ridiculed) for a lackluster conference meet, with many placing the blame on Marsh, and it was clearly a calculated move to prep for peak performance at NCAAs and WC Trials. The Cal men swam very well today, and they weren’t the only college swimmers doing lifetime bests.

Julian, Lasco, Jett all with PBs today. Any other cal swimmers?

I followed Pac 12s pretty closely and I don’t remember much criticism of Durden for Cal’s performance? Maybe one or two commentators, but more responses saying they always save their best for NCs.

Durden’s always done the NCAA to trials turnaround better than anyone not named Eddie. His 2016 NCAA to OTs was sensationals.