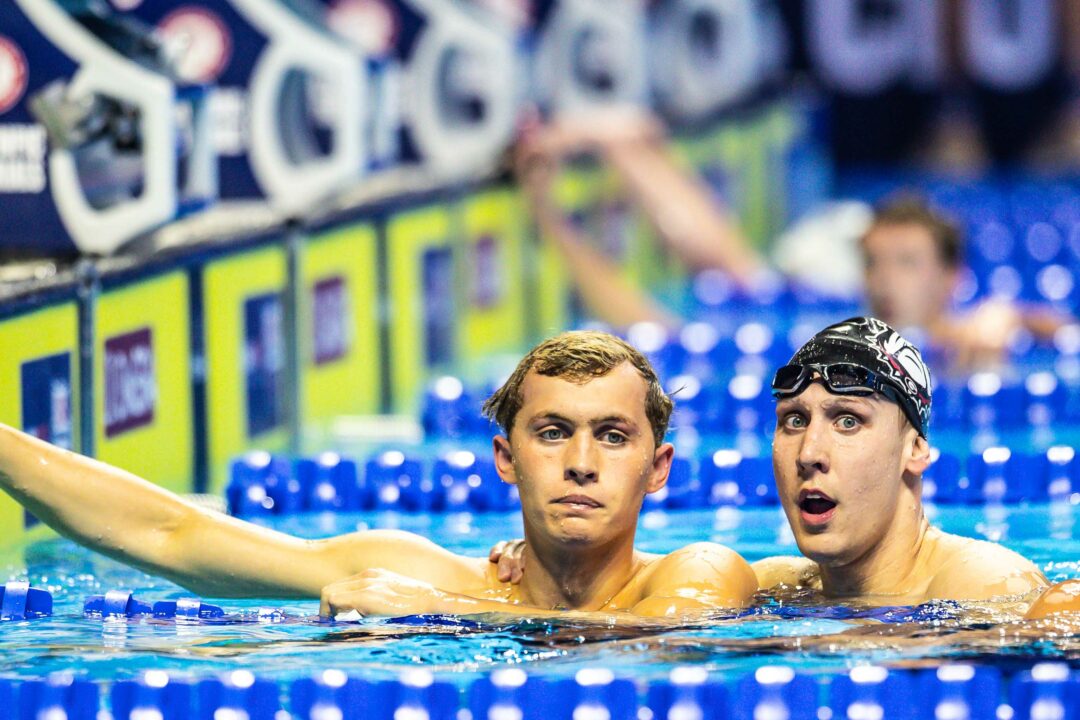 Carson Foster swam a time worthy of Olympic gold just after missing the team last year. Will he come out on top this time around? Archive photo via Jack Spitser/Spitser Photography

Each event at the 2022 Phillips 66 International Team Trials will feature a slate of elite competitors and a number of corresponding storylines. The biggest storyline in the men’s 400 IM is clear: it’s Carson Foster.

Carson Foster has long been one of the USA’s prime IMers and has risen in the ranks from standout junior to a serious contender for the senior team. In 2019 Foster swam at his last-ever World Junior Championships and wound up taking gold in the 200 IM with a 1:58.46 Championship record.

Following 2019 Foster continued to improve and came out of the pandemic as one of the leading forces in the 400 IM. In April 2021, just a few weeks before Olympic Trials, he posted a 4:13.79 to trail his PB and former world junior record of 4:13.39. That time put him well within striking distance of an Olympic berth as the #2 rank behind Chase Kalisz heading into Trials.

When it came down to the 400 IM at Trials, Foster and a pair of 2016 Olympians in Kalisz and Jay Litherland went head to head. Kalisz came out on top with a 4:09.09, followed by Litherland in a 4:10.33 and Foster in a 4:10.86. Foster had swum the fastest time of his career by more than 2 seconds but missed out on selection by just 0.53. What made the miss even more bitter was that just weeks later Foster swam another best time of 4:08.46 later that summer at Summer Southern Sectionals. That time would have won the event at Trials and at the Olympic Games (Kalisz won gold in Tokyo with a 4:09.42).

Foster has the talent and has put in the work befitting a World Championships 400 IMer, but in order to get a spot on the team, he needs to unleash the speed in the appropriate setting.

The ones to beat here will be the same men he went up against back in Omaha. Chase Kalisz and Jay Litherland will no doubt be on the hunt for a trip to Budapest. Neither of them has put up anything special in the event since going 1-2 at the Olympic Games with Litherland having hit a 4:19,63 earlier this year and Kalisz having abstained from the 400 IM this entire season. Kalisz rarely puts up near-best times in-season, however, meaning that he is likely saving himself for the big race in Greensboro later this month.

Between the three of them, my money is on Kalisz and Foster because it’s hard to bet against a reigning Olympic champ and it’s hard to bet against the sheer determination and redemption that will be fueling Foster’s campaign to make this team. Litherland certainly has it in him, but if Foster and Kalisz can get into their PB territory, it will take a new PB for Litherland to get into the top 2.

While all eyes are on the aforementioned trio, we’d be remiss to peg this as a 3-man race. That’s because there’s a 2-time Olympic Champion who has set his sights on the event this year. Bobby Finke recently discussed his goals for this summer and said that, while he’d love to win the 800 and 1500 freestyle as he did in Tokyo, he would also like to make the team in the 400 IM.

His current PB is a 4:11.44 from Olympic Trials, but Finke said in his recent interview that he thinks he is capable of going faster. Finke has chops in the IM, having won an NCAA title for Florida in the event at 2021 NCAAs. Finke will have a full day to recover post-1500 freestyle to gear up for the 400 IM and if he has a few seconds in him as he claims, could force his way into the top 2.

Like Finke, the other contenders in the 400 IM will need a sizeable drop from their PBs in order to be in contention for a spot on the team. Looking at the rankings from January 1, 2021, until now (the qualification period for this meet), the next fastest man is Jake Foster in a 4:13.74. That was what he swam for 5th overall at Trials, followed by David Johnston in a 4:16.81, Michael Daly with a 4:19.05, and Sam Stewart rounding out the final in a 4:22.83.

Charlie Swanson is another name to look for, having recently moved from Ann Arbour to Austin where he will train with the Texas pro group. Swanson won gold in the 400 IM at the 2019 Pan American Games with a 4:11.46 but hasn’t been faster than a 4:14.33 since January 2021. Swanson missed the final at Olympic Trials last year when he finished 13th overall in prelims.

The last man who’s been fast enough to be in the top 8 conversation is Baylor Nelson who raced a 4:17.61 in December of 2021 to get under 4:20 for the first time. That swim would have placed 7th at Trials last year and if he keeps taking off time he could find himself in the final this year.

No main article photos of Carson Foster until he makes the team. The last thing he needs is the photo curse.

Had to do my man Carson like that with the photo?

Jay always comes home strong in the last 50 and Carson tends to run out of steam down the stretch. Chase relies on his breaststroke to vault past everyone going into the freestyle.

So, it should be another entertaining race from those 3.

The photo picked for this post is chef’s kiss 😁

I’m rooting for Foster. The lazy late closing style always irritates the hell out of me even though I like Litherland himself. Stretch runners are invariably going for the place or show pool not the win.

Finke should swim this event. He knows darn well the standards have not been high enough since Phelps and Lochte departed. Heck, even Kalisz seemed slightly embarrassed that his time was good enough for gold.

The “lazy late closing style” draws your ire (for a very strange reason), but Bobby Finke escapes it? Right. Anyway.

“Grrrrr y he have more endurance and better race strategy than swimmer I want win, grrrrrr”

Please apologize to every single backhalf swimmer/runner/racer in history. Coming from behind is an art.

Absolutely not lazy, it’s tactical and incredibly difficult and jay swims that last 100 free better than anyone when it counts. You don’t win an Olympic medal by swimming a lazy race

What a great photos.

Honestly. Did not have to do my boy Carson like that, man’s looks like he’s about to cry