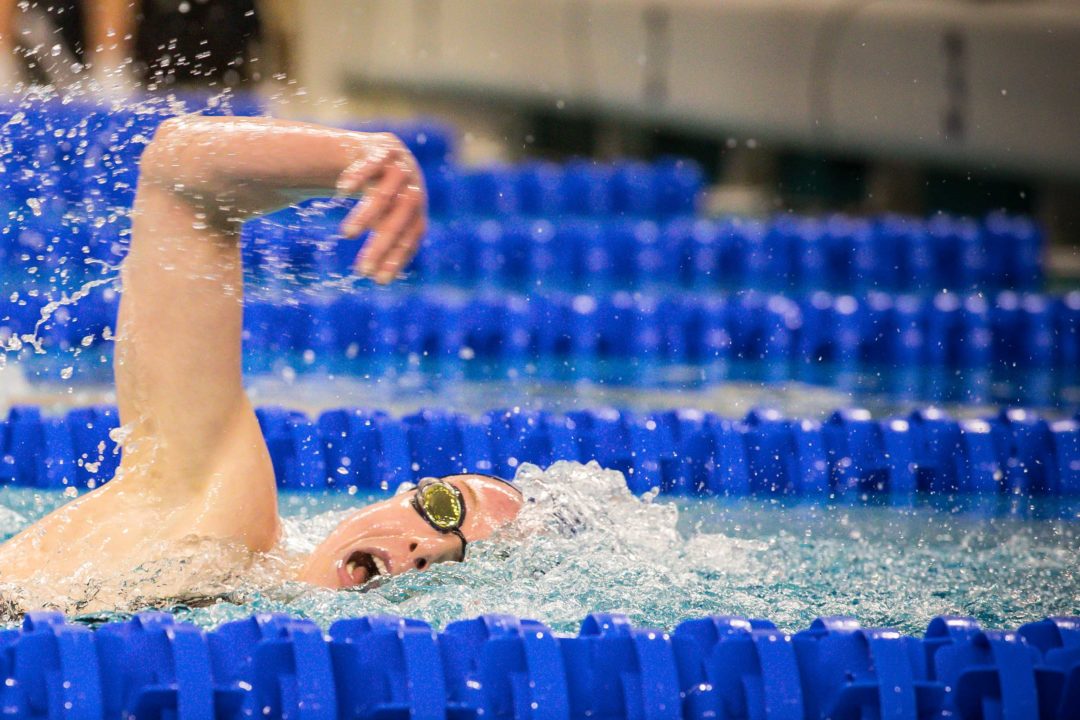 None of the top swimmers in this event are pure sprinters, which is a contrast to 2020, when Erika Brown, Abbey Weitzeil and Veronica Burchill led the NCAA. Archive photo via Jack Spitser/Spitser Photography

While the most recent NCAA champion (and the NCAA/American/U.S. Open record-holder) were mid-distance freestylers in their college days, last season, pure sprinters Erika Brown, Abbey Weitzeil and Veronica Burchill had the top three times in the country, swimming up to the 200 from their main sprint events.

So, whereas a swimmer like Franklin, Comerford, Brown or Weitzeil might gun it from the race’s start and win by sheer opening speed, this is a field that will largely swim more strategically. Endurance swimmers win the 200 free by making a move on the third 50, perhaps, or building over the final 100.

For example, none of the top four swimmers faded in their season-best performances, despite all going out in 49s. Indubitably, Madden and Harnish can be dangerous over the final 50, but these top contenders are not the fly-and-die types. Madden returns from the 2019 A-final, where she was fifth as a sophomore; at that meet, Harnish didn’t make finals, Gaines was relay-only as a freshman, and Pash was in high school, so it’ll be a new-look final.

The only other returner from 2019 besides Madden, A- or B-final, is Cal senior Robin Neumann. As a sophomore, Neumann was 1:43.0 in prelims, gaining time in finals and finishing eighth. She’s fifth on this year’s psychs, with a 1:43.19, while her sophomore teammate Ayla Spitz sits #9 at 1:44.10. Neumann is a seasoned talent, and her Pac-12 winning performance was just tenths off of her lifetime best of 1:42.94; she’s a safe bet for an A-final showing here, and she could make a run at the title, too.

Behind Neumann are three more women in the 1:43 range, led by Texas A&M freshman Chloe Stepanek at 1:43.36. The highest-seeded rookie at #6, Stepanek has responded well to her training with Steve Bultman and staff at A&M, already two seconds faster than her high school best in the 200 free this year.

Stepanek struggled in both the 50 and 100 free at the SEC Championships, missing her season-bests in both, but still tied for 2nd in the 200 free in 1:43.58 – after a 1:43.36 on a relay leadoff leg. If we take her other results as an indicator that she was mostly training through the meet, and she was still able to pop 1:43 in the 200 free, that bodes very well for her fortunes at NCAAs.

Scott is one of two Indiana-to-Alabama transfers, with sophomore Cora Dupre seeded 15th at 1:44.76. Scott and Dupre both finished in the A-final in this race at SECs, with Scott’s lifetime best (1:43.69) coming from her 800 free relay lead-off. Dupre hasn’t yet matched her lifetime best this season, which is a 1:43.76 from 2020 Big Tens, and she didn’t race on the Crimson Tide 800 relay. It’s definitely possible that both Alabama sprinters will make the A-final at NCAAs if they’re both on their bests.

Notably, Nebraska senior Autumn Haebig sits at #10 on the psychs with her Big Ten title-winning time of 1:44.39. Haebig is the best product out of the Husker program in years, and her 200 free title was the school’s first Big Ten conference title ever. This is her second NCAA appearance, and first since her freshman year in spring 2018.

I agree with these picks except Riley is riding off of momentum from SEC I think she’ll be close to winning or may even win. She has speed if she can hold off madden and Neumann