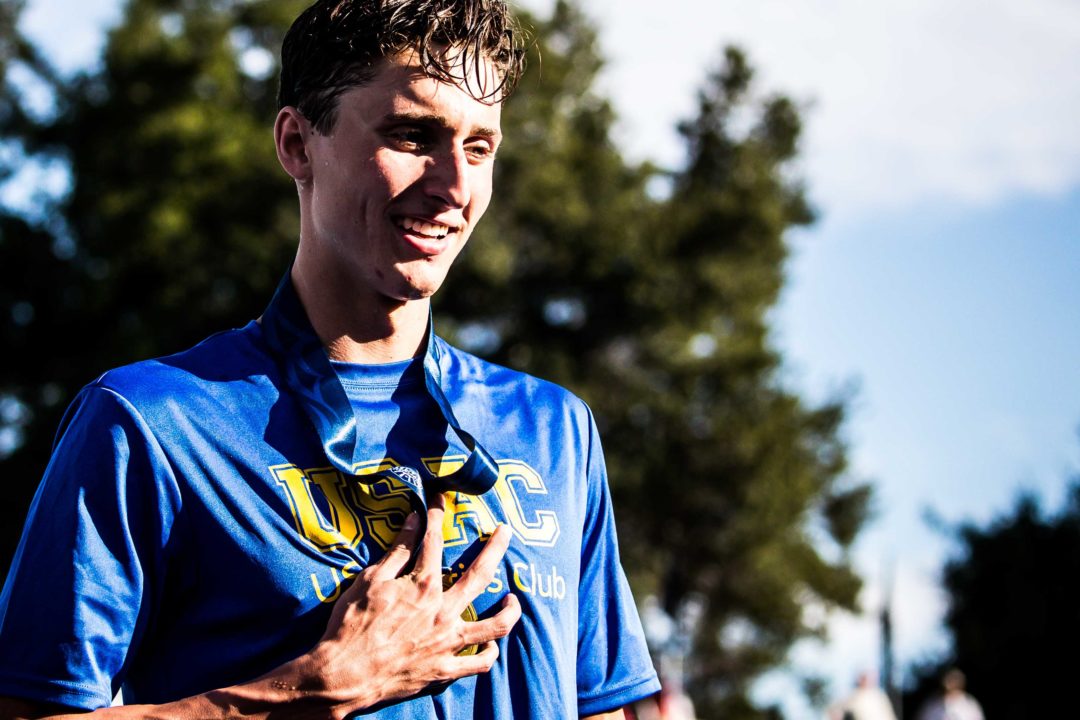 University of Alabama swimmer Liam Bell has withdrawn from the NCAA Championship meet, but because the withdrawal was done more than 24 hours after invites were sent, he was not replaced.

The NCAA’s new COVID-rules for this season say that alternates will only be called up to the meet if the scratched swimmer is dropped within 24 hours of the invitations being announced. We learned from the Florida women this week that there is an apparent loophole if the scratched swimmer is the result of qualifying divers to NCAAs, but we also learned from Daria Pyshnenko of Michigan that they’re enforcing the rule otherwise.

Like Pyshnenko, Bell’s absence could have been predicted before the scratch deadline: Bell, a sophomore at Alabama, re-entered the NCAA transfer portal on March 2.

This is Bell’s second time in the portal. Last year, after the cancellation of the NCAA Championships, Bell entered his name into the portal. He ultimately decided to stay at Alabama, but has now put his name back in.

This time, Bell is marked with a “do not contact” notice, which often, but not always, means that an athlete has their transfer destination already chosen.

In 2020, as a freshman, Bell finished as the runner-up in the 100 breaststroke at the SEC Championships and was seeded 6th in that event for the NCAA Championships before they were canceled.

At this year’s SEC Championship meet, Bell won the C final of the 100 breaststroke in 53.21 and missed scoring in the 50 and 100 freestyles, his other two individual events. He swam a leg on Alabama’s 8th-place 800 free relay, but was bumped from the medley relays by fellow sophomore Derek Maas.

Alabama will have a new head coach next season: Coley Stickels resigned mid-year after just 18 months leading the program, and Margo Geer, who only recently ended her competitive career, will take over in her first full-time college coaching job.

The current first alternate for the NCAA Championships is Navy’s Micah Oh and the second alternate is Indiana’s Michael Calvillo. It’s likely that Oh will get a callup when Texas scratches at least one, and possibly two, swimmers to make room for their diving qualifiers.

Malice to coach/team.
Not a good look

Yeah that really doesn’t look good for Alabama. Doesn’t even care to try and score points for them

There isn’t any malice; the kid has an injury.

So he was an alternate relay swimmer? For NC’s?

Should Micah Oh (USNA) get called up, this gives the Mids 4 individually qualified swimmers. That triggers the qualification of their 800 free relay that had an invited swimmer (McGovern) and the provisional cut (.5 from the “A” cut). It’s also the 17th fastest time (faster than 6 relays that already qualified). With their two divers qualifying, their team goes from 3 to 9 in the span of a few days.

Hopefully Navy will get in. They are an incredible Cinderella story. Some fantastic swimmers who were shut down repeatedly due to covid restrictions on campus, including missing their championship and shave and taper invite meets. None of them ever had a chance to even post their best possible times this season. If they have 9 going it will be due the greatest athletic “heart” you can imagine for both the team and the coaches. Against all odds …. but these are our future defenders of our country.

Dude can’t make up his mind. Seems like a red flag…

He switched club teams a few times as well. I wonder what didn’t work as well this year. Maybe just a sophomore slump.

Talent is pretty undeniable though.

Dude was asked to leave at least one club program.

Liam, come to Bloomington, Indiana and swim for the Hoosiers and GOAT Coach, Ray Looze. We’d love to have you!

He was injured at SECs right?

Had a groin injury at SECs

Is this the “Margo Effect” people were talking about?

naaaah, Ozzie is still there and might be glue that holds that paper ship together. This dude has big dreams, watched some Tony Robbins and understood that it is not his fault but the coaches so time pack the bags