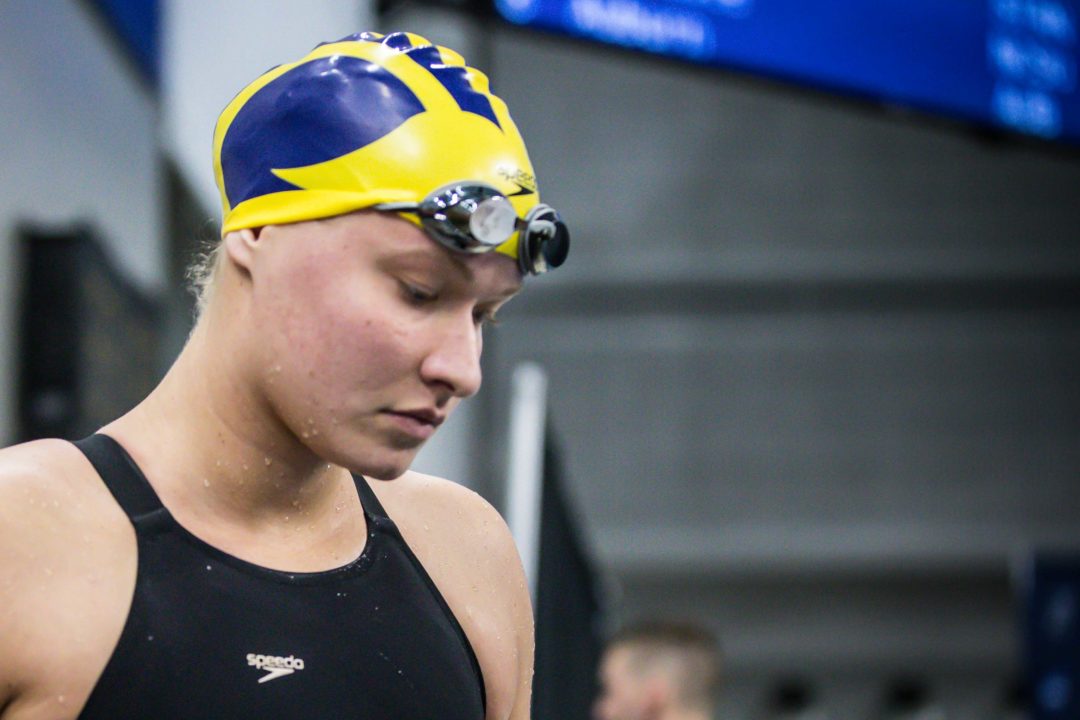 Pyshnenko, a senior, has decided to retire from swimming, in spite of being seeded to score big points for the Wolverines at the NCAA Championships. Archive photo via Jack Spitser/Spitser Photography

University of Michigan senior Daria Pyshnenko has decided to retire from swimming and won’t be racing at the 2021 NCAA Championship meet.

At last week’s Big Ten Championships, Pyshnenko scored 55.5 points for the Wolverines. That ranked her 7th among Michigan’s scorers, even with only two events. She finished 2nd in both the 50 and 100 freestyles, behind only teammate Maggie MacNeil.

She was also a key relay leg for the Wolverines, swimming anchor on the 200 medley and 400 medley relays, plus the team’s second-fastest splits on the 200 and 400 free relays.

Pyshnenko first hinted that she was done with swimming with the post below, and confirmed to SwimSwam that she would not be swimming at NCAAs.

Every NCAA swimmer who competed this season received an extra year of NCAA eligibility, so even beyond this season she would have been eligible to swim another meet for the Wolverines.

Pyshnenko said that she’s unable to share a reason for why she’s pulling out before NCAAs. She qualified for the meet all four years of her career, but her sophomore season was her only chance to actually race individual events. There she finished 31st in the 50 free.

It’s unclear, based on the timing of the scratch, who will be called up to the meet. NCAA pandemic rules this year say that swimmers can only be called in off the alternates list if scratches happen within 24 hours of the official release of invites (which is expected some time today).

At present, the first alternate is Donna Depolo, a breaststroker from Nevada. But it’s not entirely clear whether she’ll be called up or if the ‘lines’ wil be re-run with the next-ranked swimmer in the 50 and 100 free moved up.

It may not ultimately matter, though, as the next-ranked swimmers in the 50 and 100 freestyle are already invited in both events, so the spot might go to Depolo regardless.

I support you, Daria

Wasn’t she a captain on the team also?
Heard the culture was bad on the team & she tried to do something about it, and stepped up to report.

Why is Daria STILL on the psych sheet?

She’s not required to tell us why she won’t be swimming…I’m sure the people who need to know, know.
If she’s sure she won’t swim at NCAA’s, sharing that information before the change deadline passed was important so roster and invite adjustments can be made.
If there’s a problem within the team, it may not be her place to cause a distraction right before the championships…we don’t know. If it’s personal, it’s up to her whether to share and when. Let it be.
She doesn’t owe us anything.

You’re right, she doesn’t owe us anything.

But I hope she and all of her teammates, when they bitch and moan about not getting enough attention for swimming or their team or whatever, remember that nobody owes them anything either. Not ESPN, not the swimming fans, not the swimswam writers, not the football team or coach, not their athletics director, etc. etc. etc.

Yikes!
I’m not a Michigan supporter, just a Daria fan:)

Proud to see athletes prioritizing their mental health and knowing what they need to do to be their best selves! Making it through this year’s obstacles is a huge accomplishment in itself.

So much love to Daria! It’s a good thing to see an athlete prioritize their mental health!

Swimmers know swimming isn’t an easy sport. There comes a time where its time to move on – and its different for everyone. Give the woman a break – she deserves it. She’s obviously been swimming competitively since being a young child. To stop before NCs was her timing – and not yours, mine, or anyone else’s.

Daria was a great athlete and fierce competitor, lots of respect for the work she has put in over the last few years!