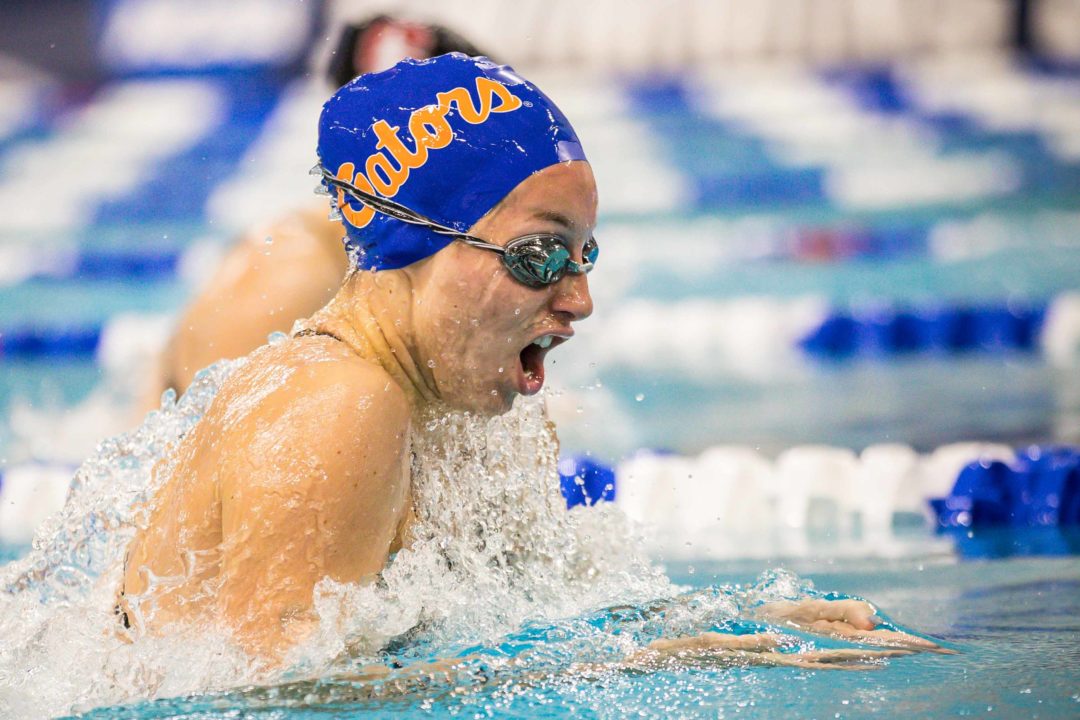 We crunched the numbers - and the early unofficial returns say that all swimmers seeded 41st and higher will earn NCAA bids this year. Archive photo via Jack Spitser/Spitser Photography

Our story on pre-selection psych sheets.

The 2021 NCAA Championships are set to select deeper into the fields than we’ve seen in some time, with the entirety of row 41 from the pre-selection psych sheets earning invites.

As always, our analysis is only an unofficial projection, and we’ll update this story if our checks and rechecks of the math change the projected selections. Big thanks to SwimSwam’s Andrew Mering for crunching all the numbers after the pre-selection sheets were released this morning.

The NCAA selection criteria is relatively complex, based on getting exactly 270 men and 322 women into the national championship meet. You can read the finer points of that selection criteria here, but the upshot is that the top 35 to 40 women in each event should earn an invite in most years, while the top 28 to 33 men should be in line for invites.

With all of line 41 making the cut, the tiebreakers don’t come into play yet – but they have changed from previous seasons and are noted mathematically below. This is the second year where the tiebreaker uses the NCAA A cut, rather than the NCAA record. The mathematical formula is the A cut divided by the swimmer’s time, with the highest percentage (or closest relative time to the A cut) winning the tiebreak.

These are swimming invites only, not including relays or diving. Despite Virginia still being the favorites to win the meet, it’s actually two SEC programs leading the way in individual invitees.

Florida leads the nation with 16 projected invitees. That’s without star distance swimmer Leah Braswell, who would have been in line for an invite, but bowed out of SECs with health concerns.

So is it 41 this year because that is how many it took to fill 322 women? What is different about this year if 40 is typically the high end?

We have a few theories that we’re going to test. The leading one is that we think that the mid-major swimmers, who are largely absent, were most likely to have one high-ranking swim and otherwise be on “B” cuts for 2nd or 3rd events. Fewer one-event-invitees would result in a lower cutline.

So easier or harder (time wise) to make it to ncaas??? Not cut line but time?

I’m not sure anything was easier this year, even if times are slower.

Can someone explain how tiebreakers work?

We could very well see it take under a minute soon to make it for the 100 breast. Crazy

Just curious, when was the last time BGSU had someone at NCAAs?

for swimming, not diving

Last year. Daisy has qualified the past 2 years. But Cheryl would have been before that.

Really shows the shift in swimming depth to the east and south – SEC, ACC, BIG10 dominate expected invites. Stanford and Cal rep the PAC12 and Texas the BIG12, but otherwise the depth of swimming in those two conferences has really declined over the last few decades. I can remember when PAC12 teams would dominate.

I see where you are coming from, but with COVID and the Olympic year(s) redshirts… I am not sure how much can be read into this year.

yes, but its a shame and bad for the sport that so many PAC12 teams don’t sponsor or really support swimming. The West Coast used to be the hotbed for tom swimming, and while its great that east coast teams have gotten tot the level where PAC12 teams used to be, its not encouraging to see so many program cut (or funding for coaches, scholarships cut). Have to wonder what the extended impact of Covid shutdowns and the loss to college athletic budgets (along with other budgetary pressures colleges face) will have in the long run. A lot of colleges have survived thru 2020-2021 via loans from other school funds, endowments, and those will have to be repaid so I… Read more »