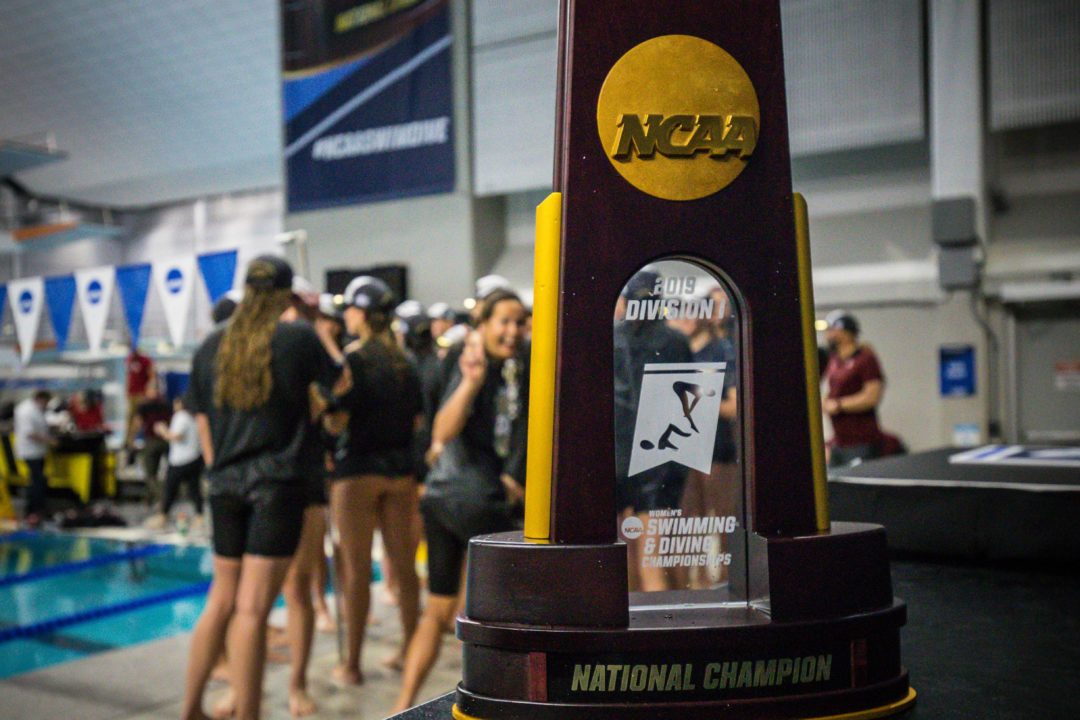 The Stanford women are the 4-time defending NCAA Champions in women's swimming & diving, but injuries and deferrals have left this year's trophy up for grabs. Archive photo via Jack Spitser/Spitser Photography

The NCAA has released the pre-selection psych sheets for the 2021 Women’s Division I NCAA Swimming & Diving Championships. These lists don’t dictate who has been selected to the NCAA Championship meet, but they do tell us a few things.

For one, it shows us event selection for the more versatile of the qualifiers who had more realistic options than the allowed maximum 3 individual entries for the meet. Swimmers had to narrow the lists only to the 3 events they intend to swim.

Further, because more than 16 will be chosen per event, this allows us to begin scoring the psych sheets.

And finally, these lists will allow us to project where the cutline will eventually fall.

There can still be changes from these entries. Official post-cut entries, if historical patterns follow, will be released Wednesday. After their official release, if a swimmer scratches within 24 hours, they will be replaced by an alternate. This is a different procedure from prior years, where athletes could be called up until the meet began, because of additional COVID-19 policies put in place by the NCAA.

In all, there are many fewer “pre-selection” entries than we normally see. That’s because many mid-major programs are running their regular seasons and conference championships into March and April. We often see almost-any swimmer with a “B” cut wind up on these sheets, even if coaches know they won’t get a call-up, which usually means well over 100 pre-selection entries per event.

This year, because of fewer entries from the power teams and far fewer “B” cuts from mid-major programs, which have been more likely to delay their seasons, every individual event has 100 or fewer pre-selection entries.

Over the course of Tuesday, SwimSwam will break these entries down, look for the most interesting choices, and project where the cutline and scoring will come out.

The women’s 2021 championship meet will run from March 18-21, 2021 at the Greensboro Aquatic Center in Greensboro, North Carolina.

Men’s entries are due out next week after the conclusion of the Big Ten Championships and a handful of scheduled Last Chance meets.

Hope Stege and McSharry swim well at this meet. The LADY vols usually swim slower than at SECs. If so, this could be a very disappointing season after a 5th place team finish at SECs – as defending champs. As is always said – they are “young” and recruited great SO – what until next year!

Alex Walsh in 2IM, 2Fr, 2Br… interesting choices. Especially because UVA has 3 Top-16 entries in 2breast with Wenger at 19th, but only freshman Tiltmann in 2back at 12th seed.

Agreed, its odd. Desorbo must think she has a big swim in her

Forde is entered in 200Br, just a single time from the 1st swim of the season in Nov. so shes at #30+, just Look at her prior NCAA, so quite possible she has another A final. She may not beet Madden, but may have 3 podiums

I should have said prior Pac12s. Forde won last years title, she passed on 2-Br whiie Lily King dominated. I’m sure she will have fun, last swim of Sr year,

We get Douglass vs. MacNeil THREE TIMES!!!

So many of the relay top times are super close.
400 Medley relay, top 4 are all 0.5s apart.. Then 3s behind is the fifth ranked team

This is anyone’s meet because of the pandemic. I think the pandemic has let swimmers focus on swimming more than school while school was shut down, producing faster times. Should be exciting!

Times are slower. Much slower.