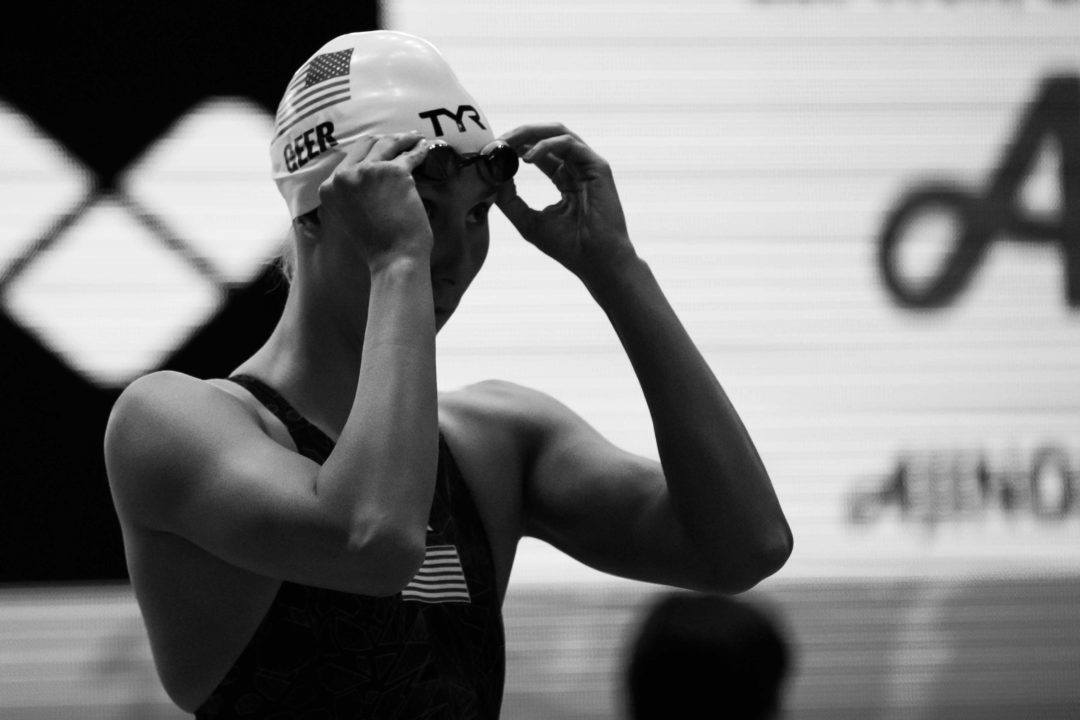 USA National Teamer Margo Geer announced today that she has decided to retire from competitive swimming now, rather than competing through to Olympic Trials. Current photo via Mike Lewis/Ola Vista Photography

In a fairly surprising twist to one of the more surprising stories of the 2020-2021, USA National Team member and Alabama-head-coach-to-be Margo Geer announced today that she has decided to retire from competitive swimming now, rather than competing this summer at the United States Olympic Trials.

To the sport I love:

For 23 years you have been an enormous part of my life.

You marked the beginning of lasting relationships, you awakened my competitive spirit, and in many ways, you made me who I am today.

You taught me how to value something bigger than myself. Whether it was at the Springfield YMCA, or the University of Arizona, or on the USA National Team, you showed me how impactful truly believing in team over self can be.

You were my ticket across the world. From North America, to Australia, to Europe, to Asia, to South America, and all the way back home to Milford Center, Ohio, you opened my eyes to a community unlike anything I could have ever imagined.

You ignited something deep inside of me – a competitive fire. One so strong that no disappointment could be too painful, and no success could be too gratifying to extinguish.

To the sport I love more than any other – thank you. I can’t wait to see you in a different light.

But my deepest thanks are to my family. A lifetime is too short to express my gratitude. There is not a single part of this journey that you weren’t a part of. You watched me splash around at Scotts pool, and later compete against the best on the world stage. You were there for it all. No distance was too far – from drives across the country, to flights around the world, you were always up for the adventure. And I know you’re excited for the next one.

Thank you to the University of Alabama for the opportunity to lead the Crimson Tide. @alabamaswimdive

In a message to SwimSwam, Geer confirmed that her post means that she is retiring now, but declined to share the specific reasons for the timing.

Back in December, the University of Alabama announced that head coach Colely Stickels was resigning after roughly a year and a half in Tuscaloosa, that associate head coach Ozzie Quevedo would take over as interim head coach, and that Geer, in turn, would become the team’s permanent head coach once she wrapped up her competitive career, “as she is currently training for the 2021 Olympic Games.”

At that point, Geer was serving as a volunteer assistant for Alabama, and training under Stickels as a pro.

Before that, her only other coaching experience came as a volunteer assistant for Ohio State during the 2016-2017 season. So, while Geer had an impressive run as a competitive swimmer, we’re used to seeing Power 5 head coaches have either previous head coach experience or a long track record as an assistant at a major program.

The 28-year-old Geer grew up swimming in Ohio, then attended the University of Arizona, where she swam under head coaches Eric Hansen and then Rick Demont. Geer qualified for NCAAs all four years as a Wildcat, winning the 50 free as a junior and the 100 free her last two years and ending her college career as 23-time All-American, as well as the school record holder in the 100 free, (47.14), 800 free relay, and the 400 free relay.

After making a few finals at the 2012 Olympic Trials and 2013 World Champs Trials, Geer qualified for her first major international team with a 6th-place finish in the 100 free at the 2014 National Championships. That earned her a spot as a relay swimmer at the 2015 World Championships, where she earned a gold medal in the 4×100 mixed freestyle relay, a silver in the 4×100 mixed medley relay, and a bronze in the women’s 4×100 freestyle.

Geer missed the major US teams in 2016 and 2017, and then moved to train at Indiana University, where Stickels was then the associate head coach. Geer was one of several swimmers who appeared to have immediate improvement under Stickels, and at the 2018 US Nationals, she qualified for 2018 Pan Pacs, and ultimately a relay spot on the 2019 World Championships team and an individual spot at the 2019 Pan American Games.

She earned a silver medal for her prelims swim on the 4×100 free at Worlds, then netted five gold medals and one silver at Pan Ams, including an individual gold in the 100 free. Geer, along with several other members of the Indiana training group, then followed Stickels to Alabama when he became the Crimson Tide’s head coach for the 2019-2020 season.

Geer’s best time of 53.44 in the 100 free comes 2018 Summer Nationals, and that time ranks her as the 5th-fastest American woman since the Rio Olympics. However, her best time during the Olympic Trials qualifying period (which started November 28th, 2018), is a 54.09 from January 2019, and her fastest time this season was a 55.49 from the San Antonio PSS stop, which ranks her 10th among US women in that even this year.

This is surely a surprise to say the least. Between Reed Malone retiring last week, Bruno Blaskovic injuring his back, and now this alot has happened over past week.

How did I miss Reed Malone retiring? Damn 🙁

There will be no Olympics this year

Dang couldn’t hold out a few more months I guess

Abby Weitzel and Simone Manuel wish you the best of luck.

Stay classy, Eula. No need to dunk on a retirement statement.

It’s been a tough past year. She gave it hard try and got very far. Professional swimming isn’t for everyone. It’s a tough life, especially if your name isn’t Ledecky or Dressel. It’s easy to forget there’s not a lot of money in our sport, most aren’t able to set themselves for life. There comes a point where we sometimes decide no matter how much we love something, we’re ready to say goodbye, and step beyond the journey it’s taken us on. Wherever this existence takes her next, I simply wish her the best of luck.

She’ll make up the loss of money in no time with that Bama job!!

A thoughtful Goodbye to Swimming statement.

She must have decided that she wasn’t going to make the Olympic team. So she’s going to move on to the next chapter now.

She won three NCAA titles for Arizona. Definitely going to be in their athletic Hall of Fame.

She may well have thought that she could still get a relay spot but decided that long term the job offer she has is a better bet at this stage. I don’t think this should be seen as “can’t make the team”. Obviously an individual spot is very tough for US swimmers to acheive.

I don’t know, an SEC head coaching gig sounds sort of fun and exciting. Why not go all in? She has a world of doubters, so why not get a jumpstart to do every thing you can to prove them wrong? She made an honest assessment of her chances to make the canceled Olympic team.

Thanks, Margo. God’s speed to you in the next phase of your life. You will be amazing at leading Alabama and beyond. I hope you will see that coaching provides every bit as much excitement, adventure, sometimes heartache, and fulfillment as competing does. It’s just different.