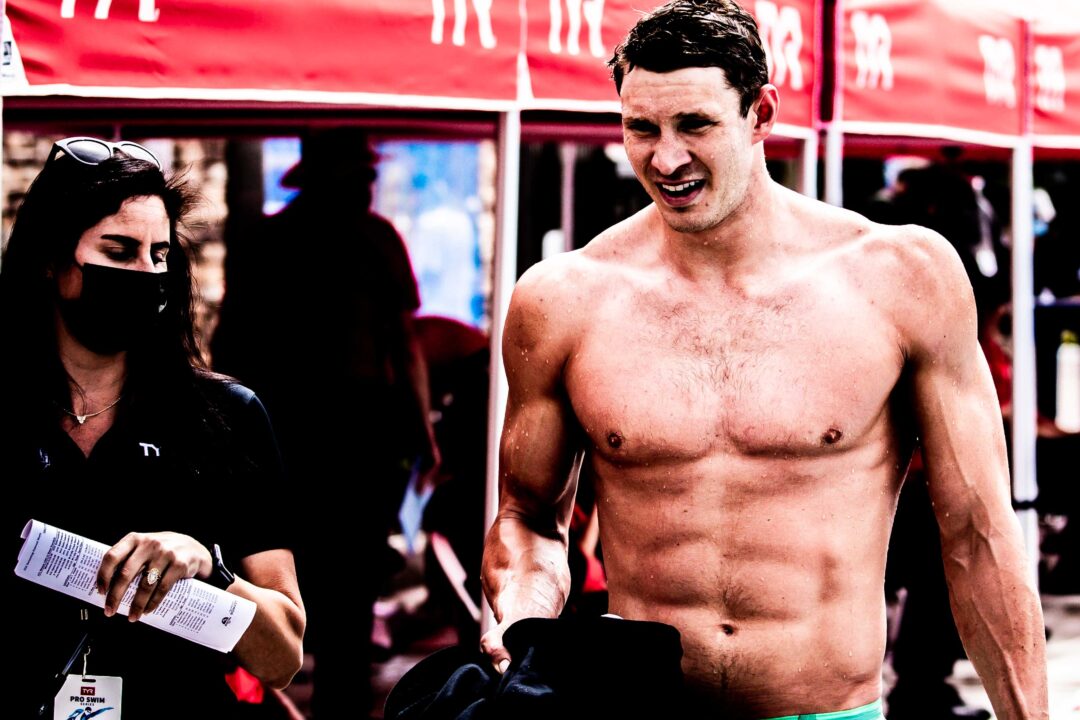 Ryan Murphy is the defending Olympic champion in the 100 backstroke, though he missed the podium in that event at the 2019 World Championships. Archive photo via Jack Spitser/Spitser Photography

In 2021, though, the field is arguably a little bit less loaded than it’s been in past years. Plummer is retired. Lochte doesn’t really swim the event anymore. Grevers just turned 36 and is almost ten years removed from his lifetime-best.

In terms of Olympic Trials storylines, how Murphy swims at Trials will probably start to answer a lot of questions about how he should be viewed heading into the Olympics. (The defending Olympic champ and reigning world record-holder still in his athletic prime at age 25 should be an obvious choice for Olympic gold favorite, but that roller coaster of year-to-year production complicates things a little until we see if we’re getting Odd-Year-Murphy or Even-Year-Murphy).

But domestically, Murphy really has no questions to answer. He’s been the #1 American in the event since the 2018 season, and it’d be a surprise to see him finish anywhere but first at Olympic Trials.

The battle for the second Olympic spot should be fierce – and the main contenders are as different as can be.

If anyone is going to actually upset Murphy, it’s probably the fast-rising youngster, Shaine Casas. A rising senior for the Texas A&M Aggies, Casas has been tearing up the NCAA over the past three seasons. This past year, Casas came within .02 seconds of breaking Murphy’s American record in the 200 short course yard backstroke. Casas smashed his way to a 52.72 in the long course 100 in the summer of 2019. And when he dropped 1.5 seconds in short course yards during the following college season, Casas looked on track to go 52-low or better in the Olympic year. The coronavirus pandemic delayed that some, but Casas might be looking at two summers’-worth of time drops this year.

On the other end of the age spectrum is the 36-year-old Grevers, a good 15 years older than Casas. (In 2008, Grevers was making his first Olympic team four months before Casas logged his first-ever swims in the USA Swimming database at the age of 8). Grevers has the advantage of experience in the Olympic Trials spotlight, and he’s a rock of consistency. Grevers was 52.6 at the 2016 Olympic Trials. He had a great bounceback in 2017 after missing the Olympic Team, going 52.1, then was 52.5 and 52.6 in the next two seasons.

Justin Ress is the speedster extending his range. At age 23, he’s directly between Murphy (25) and Casas (21) in the age spectrum. He actually competed against both at the college level – Murphy was a California junior when Ress was a freshman at NC State. Then after Murphy graduated, Ress was a senior when Casas debuted for A&M.

Ress was mostly a 50 back standout in long course, making the U.S. World Championships team in the 50 back in 2017. But he’s really started to extend his top-level speed to the 100-meter distance, hitting a career-best 53.00 earlier this month. That time currently ranks him #2 among all Americans this season, just .05 behind Murphy’s season-best. Ress has previously won this event at World University Games in 2017.

Those four are the class of the field. But coming out of the pandemic, we’re likely to see some big time drops from swimmers who would have put themselves in the conversation last summer, had the season not been mostly canceled.

The University of California has become a backstroke powerhouse, and they’ve got a crowd of potential contenders behind Murphy. Jacob Pebley was a 2016 Olympian in the 200 back – he’s definitely a bigger threat in the 200, but did go 52.9 in this event at 2016 Trials. Daniel Carr won golds in the 100 and 200 backs at the Pan American Games in 2019. He just finished up his senior season, then came within two tenths of a second of his career-best in this race with a 53.65 earlier this month in Atlanta. Bryce Mefford was 53.8 back in 2018, but hasn’t broken 54 since. Like Carr, he’s coming off of his senior season for the Golden Bears.

We’ll add one more Cal Bear to watch in our Dark Horse section at the bottom.

Ress isn’t the only NC State standout in the mix. Coleman Stewart is the #2 performer of all-time in the short course yards 100 back (43.62), and has been as fast as 53.8 in long course meters. Meanwhile current NC State rising junior Hunter Tapp just cracked 54 for the first time ever earlier this month, going 53.95.

Michael Andrew has been 53.4 in this race, and has been on fire recently in breaststroke and butterfly. But it’s probably doubtful that he swims this event at Olympic Trials. The 100 back semifinal comes quickly after the 100 breast final on night 2. The 100 breast final looks like Andrew’s best shot at making his first Olympic team, and there’s a good argument to be made that he should focus on that event first, rather than swimming 100 back heats in the morning before a 100 breast/100 back double at night.

The same could probably be said for Dean Farris, the former NCAA 100 back champ and #3 swimmer of all-time in the 100-yard back. The 200 free shares a session with the 100 back for heats, semifinals, and finals, and Farris probably stands a better shot of making the Olympic team in the 200, where the top 6 will likely be selected to fill relay spots. If Farris does try this event, though, he’s been 53.9 back in 2019 and went 54.3 just this month.

Hunter Armstrong had a great sophomore season for Ohio State. And earlier this month on the Pro Swim Series, he dropped 1.1 seconds from his lifetime-best to go 53.69. That’s the kind of trajectory that could lead to an upset spot in the top five at Trials for the 20-year-old.

Meanwhile Will Grant went 53.8 at World Juniors in 2019 leading off a gold-medal mixed medley relay. Grant would have been a Harvard sophomore this year, but with the Ivy League canceling winter sports, he’s been able to focus more heavily on long course meters, going 54.2 in May.

Dark horse: Destin Lasco (Lifetime-best/season-best 55.04). The 19-year-old had a sensational freshman season for California, dropping a second and a half in the 100-yard backstroke and taking third at NCAAs in 44.49. (He tied Grevers as the 11th-fastest all-time). Lasco just recently hacked a half-second off his long course best time with a 55.04, but his short course speed would suggest he’s got a much faster long course race in him. Given Cal’s pedigree with training backstrokers, Lasco could be a sneaky pick to snag a finals spot here.

Casas didn’t seem to deal with the nerves of NCAAs that well. He talked about getting taken out of what he wanted to do in certain races, and was slower than some random fall meets. Hopefully that was just a learning experience, and doesn’t portend how he’ll handle the even more heightened nerves of trials.

He went 3 for 3 despite not being at his best and still produced SOME best times. I think he’s ready.

Destin is a better dark horse for the 200 back. Or is he a top 8 contender at that point? I’m not sure lol. Either way, I feel like he could perform but his amazing underwaters wont help as much LCM compared to SCY.

My man Grevers has at least one more 52 in him

Without a doubt, the Wave II competition is going to be exciting with Murphy vs. Casas vs. the rest of the field. However, as I have written before, Murphy remains “the man” as far as I can see. Even having watched the LEN European Swimming Championships [still going on!] I see Murphy stoutly challenged by two Russians, but in Tokyo, its TEAM USA with Murphy for the gold.

Everyone is ignoring the two time world champion from Eastern Asia.

He swims insanely fast at the trials meet in China and then usually swims slower at the major championship (to be fair the last 2 100 back finals at worlds have been a lot slower than they should have been so everyone has been lacking) and he’s been fairly quiet this year, which may actually be a good thing. I definitely think Xu will be on the podium again, but I think one of the Russians will win it at the moment and I could definitely see Rylov doing the 100-200 double