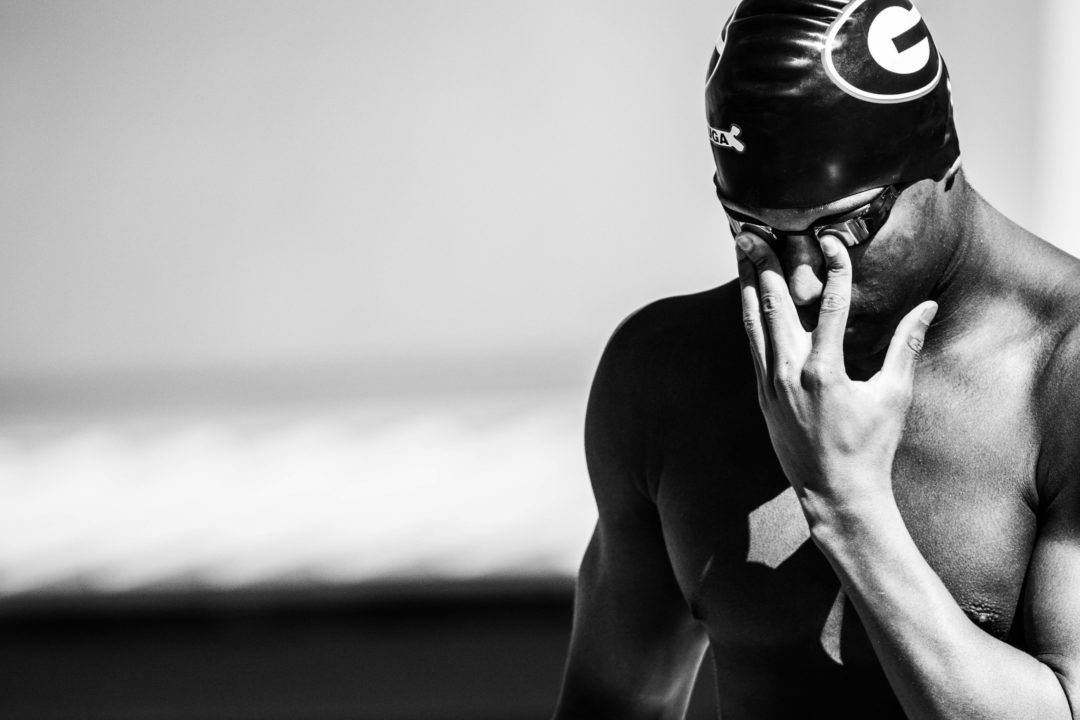 Georgia senior Camden Murphy comes in as the top seed in the 100 fly on Day 3 of the SEC Championships, seeking his first conference title in the event. Archive photo via Mike Lewis/Ola Vista Photography

“Moving day” at the 2021 Men’s SEC Championships is upon us, and it’s going to be a busy one. Five individual events are on the slate this morning, with the 400 medley relay being added to the mix tonight.

Shaine Casas and Kieran Smith both had some difficult decisions to make regarding which event they were going to swim today — including Casas legitimately having a shot to win three out of the day’s five.

The Texas A&M junior has decided to race the 100 fly over the 100 back and 400 IM, where he comes in as the second seed behind Georgia’s Camden Murphy. Murphy, a senior, will seek his first conference title in this event after winning the 200 fly each of the last two seasons.

Smith has opted to try and defend his 400 IM title, forgoing the 200 free despite swimming the second-fastest race ever leading off the 800 free relay on Tuesday.

Jake Magahey, who was the runner-up to Smith in last night’s 500 (where they both went historic 4:06s), is now probably the favorite in the 200 free, while a pair of seniors in Tanner Olson and Javier Acevedo occupy Lane 4 of the final heat in the 100 breast and 100 back.

The Gator junior really asserted himself on the breaststroke leg, out-splitting Grum by over three seconds before cruising home on freestyle.

Smith edges out his season-best of 3:42.11, maintaining his #5 rank in the nation this season, while Grum clocked 3:42.73 to slash more than a second off his personal best time. Grum’s previous best was a 3:43.93, done when he won the ‘B’ final last season.

All six returning ‘A’ finalists from last season made the championship heat, with 2020’s third-place finisher Bobby Finke (3:44.46) winning Heat 4 for third overall and Alabama’s Nicholas Perera (3:45.18) claiming the penultimate heat for fourth.

Missouri junior Jack Dubois, who swam in the ‘C’ final last year, was just four-tenths off his best time to qualify fifth overall.

After putting five men into the 500 free ‘A’ final, the Gators have another strong opening event here on Day 3, slotting four into the championship heat while also getting drops from Tyler Watson (3:47.52) and Jack VanDeusen (3:50.43) to get in the consolation final.

This season was notably much slower compared to last year’s prelims. Andrew Abruzzo‘s 3:46.99 this morning qualified him in eighth place, but that time would’ve only placed 15th in 2020.

The boys came to play in the 100 fly heats, as Camden Murphy, Shaine Casas and Luca Urlando all broke 45 seconds and set personal best times.

Georgia teammates Murphy (44.77) and Urlando (44.97) went 1-2 in the last heat, qualifying first and third overall, while Casas won the penultimate heat in 44.92 for the second spot.

Both Murphy and Casas break their respective school records, with Murphy holding the previous UGA mark at 44.89 from November and Casas having set the Aggie record at 44.98 in January.

The three of them now hold the top three spots in the NCAA, with Urlando tied with Texas’ Alvin Jiang for third.

Making significant improvements from last season to qualify for the championship final were Alabama’s Colton Stogner, who won the 2020 ‘C’ final, and TAMU’s Jace Brown, who was 38th one year ago. Stogner’s 46.45 improves his best time by a tenth, while Brown’s 46.58 marks his first time under 47, having previously been 47.36 last March.

There wasn’t a lot of breathing room in the heats of the 200 free, as all three circle-seeded heats produced 1:33s, led by last year’s second and third-place finishers Mark Theall and Brooks Curry.

Last night’s 500 runner-up Jake Magahey won the penultimate heat in 1:33.21 to advance in third, while Missouri’s Jack Dahlgren had his fastest swim in two years to win Heat 4 and qualify fourth in 1:33.66. After placing fifth in this event as a freshman, Dahlgren finished 11th last season.

Georgia sophomore Bradley Dunham, who didn’t swim at SECs in his first year, dropped seven-tenths from his best time to qualify seventh in 1:34.22. Fellow sophomore teammate Zach Hils also saw a big improvement from last season, making the ‘A’ final in eighth after placing 18th as a freshman.

Juniors Dillon Hillis and Michael Houlie threw down the gauntlet this morning in the 100 breast, clocking respective times of 51.27 and 51.38 to clearly take the top two seeds into tonight.

Florida’s Hillis went .01 under his previous best time done during last year’s SEC prelims, ultimately finishing third in the final, while Houlie chopped a full half-second from his best time (51.89) to break the Tennessee school record set by Peter Stevens in 2016 (51.51). Houlie also moves into a tie for 22nd on the all-time performers list. Last season, Houlie finished eighth.

The biggest surprise, however, came from Texas A&M senior Tanner Olson, who misses the ‘A’ final in 11th after entering as the top seed. Olson ranked second in the NCAA coming into the meet with his time of 51.39 from November’s Art Adamson Invite. He’s now fourth in the country with Hillis and Houlie moving to second and third.

Also missing the championship final was Alabama sophomore Liam Bell, who finished 24th in 53.78 after being the runner-up as a freshman in 51.39.

Missouri sophomore Ben Patton, who swam a best of 51.80 in November, qualifies third overall in 52.01 after racing the 100 back at this meet in his first year.

LSU freshman Mitchell Mason dropped over a second to reset an eight-year-old school record in 52.61, lowering Andrei Tuomola‘s 2013 mark of 52.76. Mason’s only other time being under 54 came in November at the Art Adamson Invite (53.69).

Another big improvement for a freshman was produced by Auburn’s Alejandro Flores, who completely skipped the 53s and brought his best time from 54.08 to 52.86, making the ‘B’ final in 12th.

With Shaine Casas opting to race the 100 fly, the 100 back was relatively wide open coming into today, and three men have stepped up and asserted themselves as the ones in the title hunt.

Acevedo has been slightly faster this season at 45.29, ranking him fourth in the country, while owning a best time of 44.74 from the 2018 NCAAs.

Chaney continues his massive time drops this week by taking off 1.66 seconds from his best, having previously been 47.10 back in March of 2019. That moves Chaney into sixth all-time in the 17-18 age group.

The same goes for Alabama’s Matthew Menke, who brought his PB down from 46.10 to 45.47 to qualify third overall. The two of them jump up into sixth and seventh in the NCAA this season.

Georgia sophomores Ian Grum and Bradley Dunham completed impressive doubles to make their second ‘A’ final of the morning in fourth and fifth, while Texas A&M’s Ethan Gogulski, who dealt with testicular cancer in 2019, breaks 47 for the first time to qualify eighth in 46.80.

I wish that I was a member of the Mizzou men’s team. They look like they’re having a lot of fun and support each other as they drop times!

Not sure Mizzou is recruiting singular calf muscles. Sorry to crush your dreams

Still no clock. What gives?!

The occasional PiP of the scoreboard is nice

The host institution which is controlling the livestream does not have ability to inject a live clock. ESPN/SEC Network will have one for finals tonight and tomorrow

lol, i forgot that caeleb has the 100 breast SEC record

We need to give Caeleb a taper meet where he can just swim whatever events he wants and he can try and break as many records as possible. Just for the sake of the sport

It was the US Open record for a hot second too! That 2018 championship season was insane, it felt like Caeleb could break a record in any event he wanted

Hey Florida, do you mind if my hs team borrows Kieran for a little bit?, our distance guy just got quarantined

Luca wins every day against Casas if it’s lcm, but scy will be a battle

Camden Murphy beat Urlando at the invite meet a couple months back and I think Casas has way more to show tonight too. Too tough to call for me since Urlando could definitely surprise everyone

Danny Kovac all the way!!!

How bout those MAN VOLS! Many guys swimming tonight! Kept up and reach high – get UGA in the team race!!!!

I am counting 11 ups for UGA and 3 ups for the Vols. Not sure it’s happening but we will see!

Well we can have a great 4 Medley, our guys can all move up AND there is tomorrow! We still have a chance.