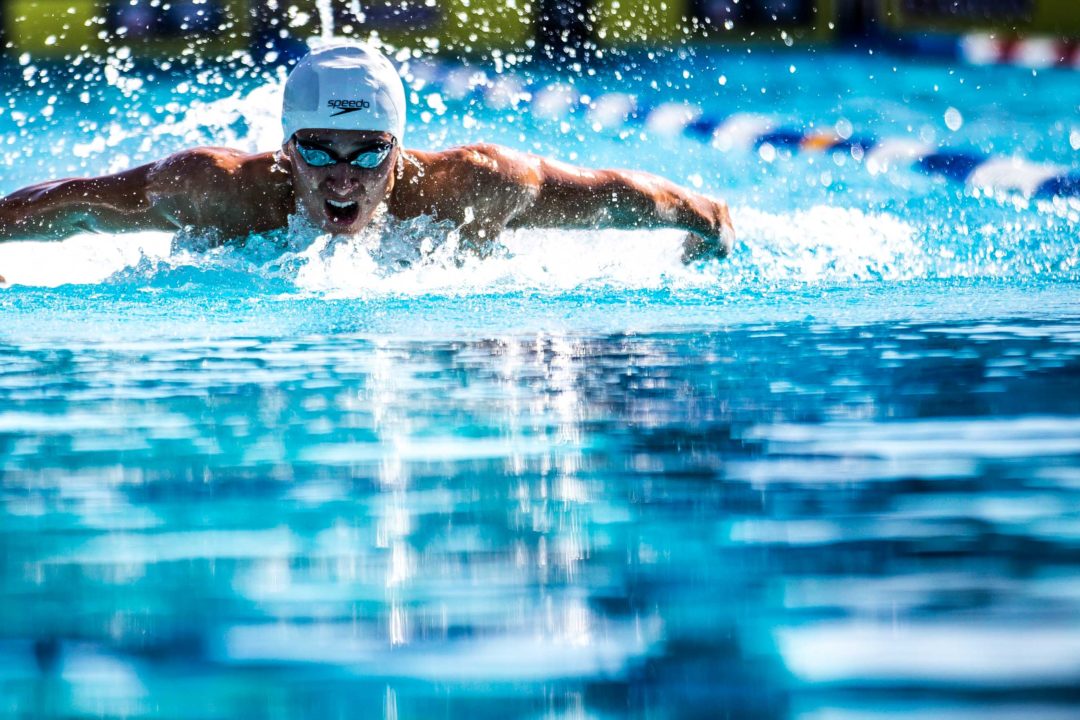 Luca Urlando was a big part of a strong morning for the Georgia Bulldogs, who are in position to eat into Florida's team lead on the penultimate day of SECs. Archive photo via Jack Spitser/Spitser Photography

Coming into Day 3, the Florida Gators had established a sizeable lead in the team race with 571 points, with Georgia well back at 424.5. Kentucky and Tennessee continued to cling to second and fourth due in part to their diving, though the Vols have been swimming well.

The Bulldogs produced a big prelim performance when they needed it, putting 11 men into ‘A’ finals and 21 total into scoring position for tonight. This included putting three up in the 200 free and 100 back, with sophomore Bradley Dunham doing so in both events.

Another Georgia sophomore, Ian Grum, also made two ‘A’ finals, doing so in the 400 IM and 100 back. Camden Murphy and Luca Urlando are also in position for some big points in the 100 fly, qualifying first and third for tonight.

Florida had another strong morning with nine ‘A’ finalists, including half of the 400 IM championship heat. Texas A&M put six up, Mizzou had five, and the Vols put nine swimmers into consolation finals.

Scoring out the prelims, Georgia projects to gain 70.5 points on Florida tonight (excluding the 400 medley relay), while Texas A&M appears to have a battle on their hands for third with Tennessee. Alabama notably had a strong performance in the 100 back.

Georgia is expected to bridge some of Florida’s gap leading into the final day, while there’s a fun in-state battle brewing between Auburn and Alabama, who are projected to finish the penultimate day in a tie for seventh.

Looks like the MAN VOLS switched those Beaver-tailed hats for COONSKIN CAPS! Well done a great day…just went past A+M, NOW go get UGA! Hey – where was Matt Kredich today? Not at the meet??

I’m curious as to who SwimFani is he/she seems to enjoy stirring the pot in regards to Tennessee. Troll accounts are the best/worst

Check your history – Simon Kenton is a clue.

Wow another day another single A final for auburn!! #Gary=goat

Big day for UGA. The bulldogs and gators are separating from the pack. It was the Tennessee Vols that shocked me. They scored 6 in the fly and 5 in the breast. They are trying to make in interesting for that battle for 3rd. I love watching the SEC competition.

ACC has an exciting team race developing too!

Kentucky can’t score a single point in any of the 100s? Even South Carolina and LSU are scoring some points there. Lars not looking like the competitor coach of the month this week.