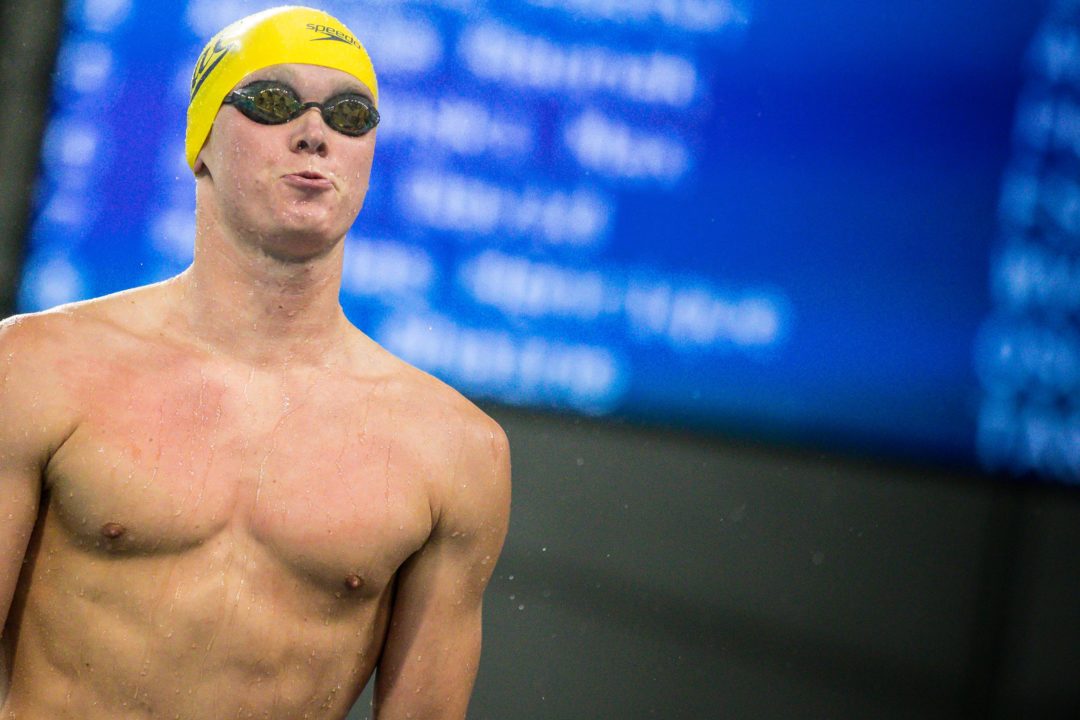 Cal senior Trenton Julian became the fourth man to go under 4:10 in the 500 free this season, setting Cal and Pac-12 Meet Records as he did so. Archive photo via Jack Spitser/Spitser Photography

Cal senior Trenton Julian broke both Cal Bears record and the Pac-12 record tonight with his 4:09.49 victory in the 500 free tonight on Day 2 of the 2021 Pac-12 Men’s Championships. We’ve seen plenty of fast swimming already this season, and that trend has continued in the 500 free, where four men nation-wide have been under 4:10, the first time that’s happened since the 2016-2017 season.

Julian came into today with a lifetime best of 4:11.30, a time which he hit in winning the B-final of the 2019 NCA Championships. He clocked a 4:14.54 this morning before going sub-4:10 this evening, breaking a pair of records held by two other men swimming the same heat tonight as Julian.

Julian broke the Cal record of 4:10.29, which his classmate Sean Grieshop set while taking 2nd at the 2019 NCAA Championships. Grieshop finished 6th tonight with a time of 4:16.05. Julian also broke the meet record of 4:10.67, which Stanford’s Grant Shoults set as a freshman in 2017. Shoults had won this event each of the three years he’s competed at this meet, and finished 4th tonight with a 4:13.73.

Going back to the 2007-2008 season, this is only the second time that four men have been under 4:10 in the same season, and the only time it’s happened before NCAAs. This sets the stage for what should be a thrilling race in Greensboro later this month.

Kieran Smith will be gunning for a new AR. The rest of the field won’t be far behind.

I thought Brooks would be the one under 4:10.

Could Cal have 3 A finalists in the 500 in 2 weeks time? Julian, Yeadon, Grieshop…

Prelims are tricky in this event but I’d say those guys have the experience to do it.

No reason to think they all can’t go faster, I think Julian and Yeadon will make it. Grieshop is a big taper swimmer, but he’s also a ways off where he’s been at PAC 12s in the past so not too sure.

Crazy thing is aside from Julian the rest under 4:10 are all either freshman or jr’s so I’d still call it a young field.

Yeah all of them are in college. Pretty young boiz