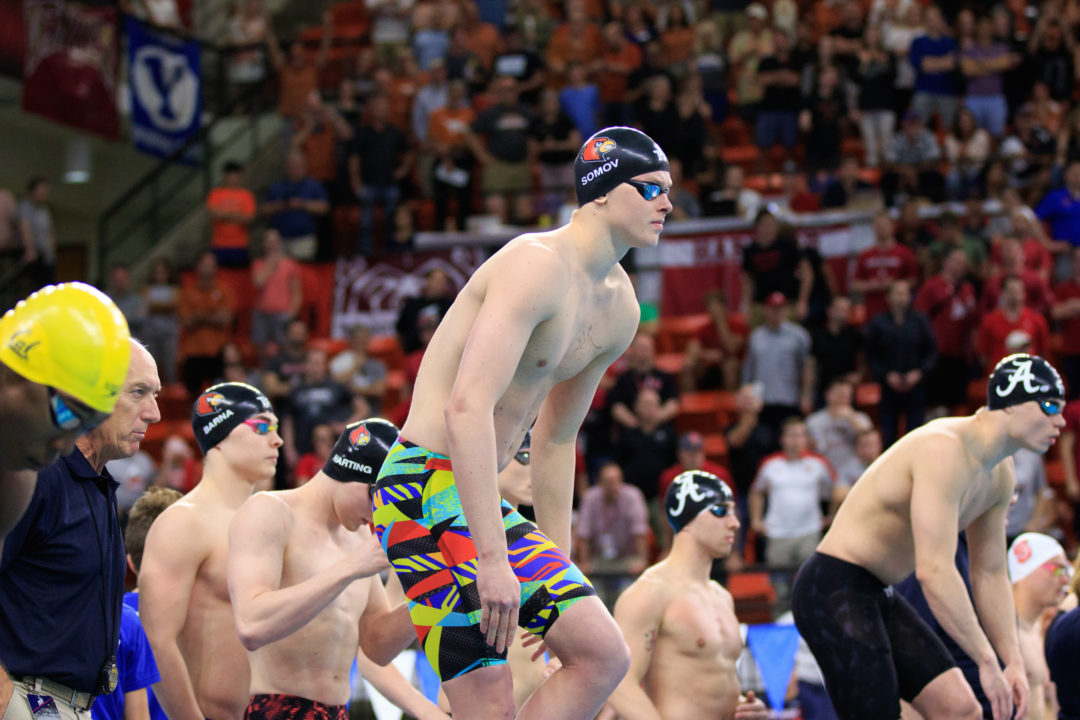 The Louisville Cardinals have a strong quartet that should be in the mix with recent 400 medley champs Cal, Indiana, and Texas. Archive photo via Louisville Athletics

The 400 medley always seems to be one of most exciting races at NCAAs, as it showcases all four strokes, but also has a little more time for the race to develop than the 200 medley relay. The 2015 and 2016 championships witnessed a pair of epic battles between Cal and Texas, with Texas coming out on top thanks to some crazy fast back halves. In 2017, Texas demolished the field, becoming the first team to go under 3:00. The next year the Indiana Hoosiers nabbed the title, then repeated in 2019 while flirting with Texas’ record. All that to say, those three teams have been the dominant players in this race in recent history, and those three top the psych sheet this year, but there’s a couple other teams that should make some noise.

The aforementioned Texas Longhorns top the psych sheet with a 3:02.11, done by the squad of Chris Staka (45.22), Caspar Corbeau (51.49), Alvin Jiang (44.24) and Daniel Krueger (41.18) at the Big 12 Championships. There’s definitely some room for Texas to improve, as there was really no reason for any of those guys to be fully tapered. Corbeau has been 51.46 individually, Jiang split 43.8 back in December 2019, and Krueger’s been 41.2 on a flat start. There’s a possibility that Texas could also use Austin Katz, who’s been under 45 multiple times, and it feels like there’s a good chance this group should be able to go 3:00-something.

The next three teams on the psych sheet are all bunched between 3:02.57 and 3:02.66. The Indiana Hoosiers lead that group with their winning time from the Big Ten Championships. Gabriel Fantoni (45.26), Zane Backes (50.85), Brendan Burns (44.79), and Jack Franzman (41.67). Backes and Burns each hit lifetime bests last month in their respective individual events in line with their relay splits, while Fantoni has been 44.9, and Franzman has been 42.4 individually in the 100 free, so it’s probably fair to expect the Hoosiers to end up right around the same time on Thursday as they were last month.

Cal’s group of Bryce Mefford (45.51), Reece Whitley (50.83), Ryan Hoffer (45.05), and Bjorn Seeliger (41.21) won Pac-12s with a 3:02.60. The backstroke leg seems to be the most subject to change, as both Destin Lasco and Daniel Carr beat Mefford individual at Pac-12s, and Carr has been sub-45. Whitley’s split their essentially matched his individual best of 50.85, while Hoffer should be good for a sub-45 split. The question mark may be Seeliger, who had two 41-something relay starts at Pac-12s, but was only 43.0 individually. As long as he’s back in the 41 low-to-mid range on this relay, Cal stands a good chance of being substantially faster and challenging Texas.

The Florida Gators won this relay by nearly two seconds at SECs with a 3:02.66. Freshman Adam Chaney hit a lifetime best leading off with a 44.99, Dillon Hillis split 51.35 on breast, and Eric Friese (45.04) and Kieran Smith (41.28) closed it out. Hillis was actually slightly faster in the individual event, which he won with a 51.22, so there is some potential on paper for this relay to be a bit faster, although it’s fair to wonder just how much more speed Florida can eek out after presumably going pretty close to all in for SECs.

The Louisville Cardinals have four men projected to score at NCAAs, and all four should be on this relay, which won ACCs with a 3:02.91. Mitchell Whyte led off with a 45.50, although he’s been sub-45. Evgenii Somov split 50.58 on the breast, right in line with his 51.03 individually. Nick Albiero split 44.81 on fly after going 44.67 individually. Haridi Sameh anchored in 42.02, and went 42.0 twice on flat starts the next day. Both Whyte and Albiero were coming off of doubles, plus an extra swim-off for Whyte. At worst, the Cardinals should be able to hold their time, and at best, they could get under 3:01 for a top-three finish and be in contention for the title.

Michigan and Ohio State are the only two schools to have gone 3:03 this year, as the two teams finished neck-and-neck behind Indiana at the Big Ten Championships with times of 3:03.16 and 3:03.17, respectively. The Wolverines took 2nd with Wyatt Davis (45.68), Will Chan (50.85), River Wright (45.47), and Gus Borges (41.98). Ohio State actually led the Wolverines for the first half of that race, thanks to a 44.92 leadoff from Hunter Armstrong and a 50.85 breast split by Hudson McDaniel, followed by a 45.47 from Semuede Andreis and a 41.93 anchor from Paul DeLakis. Most of those splits were right in line with personal bests, so there’s a not of ton of room for an obvious jump up from either team.

There’s a 1.2s gap between the 3:03 teams and the fastest teams in the 3:04 category. Georgia Tech leads the 3:04 crowd with a 3:04.27 from their second place finish at ACCs, where they seemed to be firing on all cylinders. Texas A&M is seeded 9th with a 3:04.39, but that time appears to be a composite time. Keep an eye on Shaine Casas, who we assume will be leading off, and could threaten the U.S. Open Record in the 100 back in this event. He went 45.01 on this relay at SECs, but that composite time plus flying starts could put the Aggies in contention for a top 8 spot. Three more SEC schools round out the 3:04 teams: Georgia (3:04.40) Missouri (3:04.59) and Alabama (3:04.72), and any of those could slip into the top 8, especially if one of the teams seeded above them falters. Georgia is especially intriguing, especially if they opt to use freshman Luca Urlando on this relay, which they didn’t at SECs.

One team to keep an eye on further down the seeds is the NC State Wolfpack, who touched in 3:04-low at ACCs before being disqualified for a 15m violation on the leadoff leg. Backstroker Kacper Stokowski was 44.5 on that DQ’d leg, but was 44.8 earlier that evening legally, and Luke Sobolewski, who wasn’t used on this relay, has split 45.8 (vs the 46.4 the Wolfpack got from Noah Henderson), so NC State should definitely improve on their seed time of 3:05.80 and could even be under 3:04.

This years race between Cal and Texas in this event should be just as close as in 2019, except this time it will actually be for the title

I think UGA will surprise some people here tbh

I don’t want to discount Louisville slugging out a win, but Cal and Texas just have so much room to improve on their seed and I’m not sure the Cardinal do.

I think if Cal has more than a half second lead after leg 2, then Cal wins going away. Anything less and I think Alvin and Daniel will chase them down, although I do think Hoffer will be VERY fast on this leg. Both teams will rattle 3:00

I think Michigan has a bit more to give here, Chan and Wright were both right around their flat start times and I think Davis has more in the tank for the 100 back as well

This is difficult because I def see the winning team having to go a 50 points breast and 40 point free which points directly to Texas and MAYBE Cal (they improve on back and fly split from hoffer) but Louisville going 3:02 with Sameh going 42 flat and Whyte going 45.5 kind of sticks out but from the seeds I think Lousiville is the odd team out of the last heat? In order for Cal to win they need Reece Whitley to hit a MONSTER split.