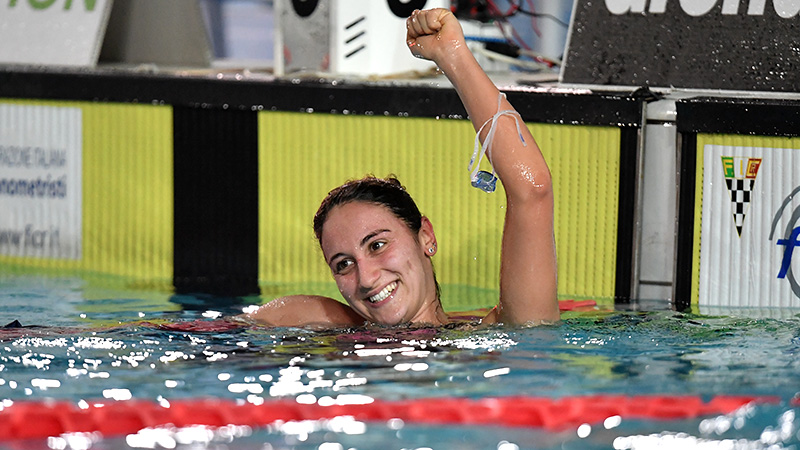 World champion Simona Quadarella is just one of the elite Italian swimmers ready to rumble in Rome at this year's Sette Colli Trophy. Archive photo via Andrea Staccioli / Deepbluemedia / Insidefoto

For the first time in history, the Sette Colli Trophy, which is being held at the Stadio del Nuoto in Rome today, August 11th through Thursday, August 13th, will double as Italy’s National Championships.

Although the visiting foreign talent pool has shrunken from years past, the top domestic athletes are set to compete, including Federica Pellegrini, Gabriele Detti, Simona Quadarella, Gregorio Paltrinieri, Benedetta Pilato and many more.

They’ll still need to fend off non-Italians to the tune of Marco Koch of Germany, Melanie Henique of France and David Verraszto of Hungary and others over the course of the meet. But, considering this is the first competitive event for many swimmers in over 4 months, we may see some super speedy racing from all participants here in Rome.

Visiting French swimmer Melanie Henique got the job done in the women’s 50m fly to kick-off the 2020 Sette Colli. The 27-year-old fired off a winning effort of 25.77 to beat the field by over half a second in the only sub-26 second outing of the pack.

Henique was the 2011 World Champion in this women’s 50m fly event but holds a lifetime best of 25.63 from 2018. That result matched the same marks he posted at the 2017 World Championships before she ultimately finished 6th in 25.76 there in Budapest.

18-year-old Mewen Tomac beat out seasoned swimmers to take the men’s 50m back final. He notched the only sub-25 second time of the field, hitting 24.88. That checks-in as a monster personal best, wiping out the 25.61 Tomac had posted in the prelims of the 2018 French Championships.

That prior clocking represented the French Age Record for 18-year-olds, but Tomac now re-wrote that with his head-turning 24.88 PB.

European Junior Championships silver medalist in this women’s 400m free event, Giulia Salin, put up the swim of her life to take gold in the race tonight. Posting a head-turning swim of 4:07.70, she managed to hold off a charging Russian in Anna Egorova and get under the 4:10 threshold for the first time in her career.

Prior to this Sette Colli meet, Salin’s lifetime best stood at the 4:10.13 she registered for runner-up in Kazan last year. However, with her 4:07.70 clocking, she overtakes the Italian ‘Cadet’ record of 4:o7.73 which Linda Caponi posted at the 2015 World Junior Championships in Singapore.

Tonight Egorova clocked the 5th fastest time of her career, with the Russian touching in 4:07.78, staying at Salin’s hip the entire duration. Belgian Valentine Dumont came in 3rd with 4:09.41, a new lifetime best, and her first outing under 4:10. That marks a new Belgian national record for the 19-year-old.

It was an Italian sweep of the men’s 400m free, led by national record holder Gabriele Detti. In fact, 25-year-old Detti’s winning time tonight of 3:43.73 fell just .50 outside of his national record, although it did overtake his own Sette Colli meet record of 3:44.21 he logged 4 years ago.

Runner-up status went to Marco De Tullio with the man nearly hitting his own personal best as well. De Tullio logged a time of 3:44.94 tonight, while his PB rests at the 3:44.86 he produced for 5th place in the Gwangju final.

Domenico Acerenza also got on the podium, courtesy of his 3:46.88 result.

Touching in 1:06.60, Mamie not only got under the 1:07 threshold for the first time in her career, but she managed to beat a packed home field, which included national record holder Martina Carraro.

Mamie’s previous lifetime best sat at the 1:07.10 she produced at last year’s World Championships in Gwangju. This year in Belgium, she collected a time of 1:08.01, pre-coronavirus pandemic in Belgium.

Finishing just .26 out of gold tonight was Arianna Castiglioni, clocking her 3rd fastest outing all-time in 1:06.86, while the aforementioned Carraro settled for bronze in 1:07.08.

Italian men made it another sweep in the 100m breast event, led by national record holder Nicolo Martinenghi. Martinenghi produced a winning time of 59.43 for the only sub-minute result of the field.

Last year Martinenghi had Great Britain’s Adam Peaty to chase, with the Brit winning the 2019 Sette Colli title in 58.72. Martinenghi was nearly at this same speed last year, hitting 59.30 as runner-up.

The women’s 50m backstroke field also saw 3 Italians surge to the surface first, led by national record holder Silvia Scalia. The 25-year-old notched a mark of 28.04 to grab the gold in the 6th fastest time of her career.

Behind her was 2018 European Championships gold medalist in the 200m back, Margherita Panziera, with Panziera posting 28.32 to hold off Costanza Cocconcelli‘s bronze medal-worthy 28.46.

It was a super close battle for gold in the men’s 100m fly, with Northwestern-bound Federico Burdisso getting to the wall first ahead of national record holder Piero Codia.

Although more of a 200m flyer, Burdisso did race this sprint at last year’s World Championships. He earned at time of 52.65 to place 19th overall but rebounded with a strong 51.83 performance for silver at the 2019 World Junior Championships.

The roles were reversed from the women’s 50m fly, as this time it was Silvia Di Pietro who got the better of visiting French swimmer Melanie Henique.

Di Pietro clocked the only sub-25 second outing of the field to produce 24.91 for 50m free gold, while Henique fell just short in 25.11. Versatile icon Federica Pellegrini touched in 25.18, good enough for bronze.

Di Pietro owns the Italian national record in this 50m free event with the 24.84 she put up 6 years ago. Tonight’s effort was only .07 away from that outing.

Alessandro Miressi led the men’s 50m freestyle charge, topping the podium in a time of 21.93. His performance represents the 21-year-old’s fastest time ever, shaving .01 off of the 21.94 he earned in Riccione 2 years ago. Both outings mark his sole ventures under 22 seconds in this event.

Leonardo Deplano was next tonight in 22.10 while Italy’s national record holder in the event, Andrea Vergani rounded out the top 3 in 22.26.

The reigning world champion in this women’s 1500m free event, Simona Quadarella was outmatched in this final, but still grabbed the silver. It was a resurgent Martina Caramignioli who took the top prize tonight, touching in 15:56.06 to Quadarella’s 16:03.69.

For Caramignioli, the 29-year-old had never before been under 16:00, owning a lifetime best of 16:04.62 from last December. However, the seasoned swimmer has been putting up some impressive times as of late, as recent as February of this year.

Wrapping up bronze was 17-year-old Giulia Salin, who already won the 400m free earlier in the session. In this longer event, Salin nabbed a time of 16:11.79

Wow, solid times all around!

Agreed, Italy has a really nice depth in many events, especially in men’s freestyle, men’s 100 breast, men’s 100 fly and women’s 100 breast.
I think they could make the final of men’s medley relay in Tokyo while only using their second best guys for each leg.

Really impressed with Marco De Tullio once again and interested to see if his younger brother can follow his progression.

Agreed, at this point i think that De Tullio is more likely to win bronze in Tokyo than Detti. Also would be interesting to see what he can do in the 800 free.

Any reporting on what kind of restrictions they put in place in terms of physical distancing, fewer fans, timers officials etc. in the COVID era? Just wondering how the operations of the meet looked different, if at all, from our “old normal “

From my best guess from translating.

Heats are separated into male and female sessions (about 50 minute session). Swimmers have no access outside of their session. Regular health screening upon arrival and social distancing while in facility. Bag for mask is provided at starting block. Personal items when not on you must be kept in a bag. Facility is cleared and disinfected after each session and before next group arrives (ie between male and female heat sessions and between heats and finals).

Thanks for the details. This sounds like it’s great for the swimmers and perfect for a pro event. Not sure how this level of distancing and event spacing could ever work at a lower level, but it’s SO AWESOME to read ‘real’ meet results again!!

Off topic, but the Big Ten just made it official

Big Ten Conference presidents and chancellors voted Tuesday to postpone all fall sports seasons, including football, with the hopes of playing in the spring, it announced Tuesday.

He was still 2.7s below his best at 300m mark, around 1s below WR pace, but we know how Biedermann closed the race. I think there is room foor improvement heading 2021

First live recap in how long?

Probably since men’s Pac-12s in February?

New live recap but old story lol..: Quadarella’s pic and the reigning World Champion was upset in her signature race