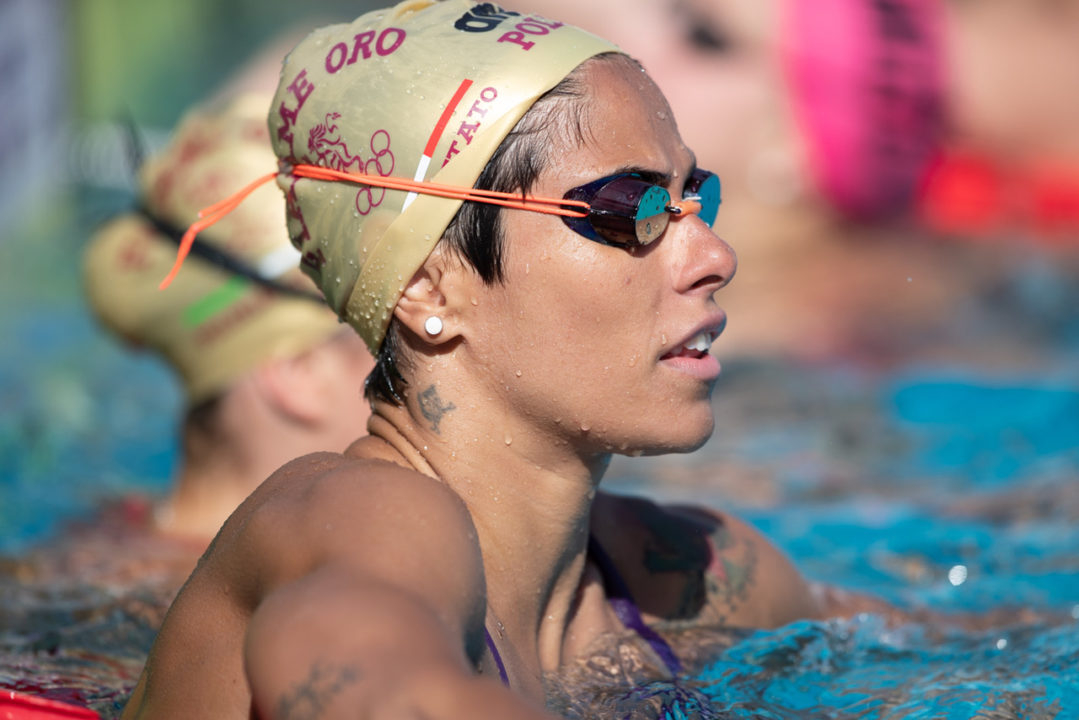 The Meeting Del Titano in San Marino concluded over the weekend, which serves as an important stepping stone to the Italian Championships slated for March. Archive photo via “Rafael/Domeyko Photography”

You can read our day 1 report from SwimSwam Italia here and our day 2 report here.

The Meeting Del Titano in San Marino concluded over the weekend, which serves as an important stepping stone to the Italian Championships slated for March 17th – 21st in Riccione.

Kicking the meet off with a bang right off the bat was Caramignoli, as the veteran produced an impressive 400m free time of 4:08.69 to take the gold. This marks the first time the 28-year-old had ever been into the sub-4:09 territory, with her previous lifetime best resting at the 4:09.04 the Italian logged at last year’s Italian Championships.

Caramignoli’s effort here was enough to hold off young Giulia Salin, a swimmer 11 years her younger, who touched in 4:11.93 for silver. Salin took silver at the 2019 European Junior Championships in 4:10.13. Already in 2020, Salin competed at the Luxembourg Euro Meet in January where she placed 10th in a modest 4:16.39 to get her calendar year underway.

The 800 and 1500m freestyle races also fell victim to Caramignoli, as the two-time World University Games medalist from 2015 clocked times of 8:30.36 and 16:10.70, respectively. In that latter event, she crushed the field by over 43 seconds en route to clocking the 4th fastest performance of her career.

Her 800 also inserts itself into Caramignoli’s all-time career-best list at slot #3.

In other events, Bianchi got the job done for gold in the only sub-1:00 time of the women’s 100m fly field. She clocked 59.80 to set herself atop from the competition.

Sabbioni earned a time of 55.35 to win the men’s 100m back, touching almost a second ahead of runner-up Fabio Laugeni and his silver medal-worthy 56.31.

The women’s 50m free was still quick, despite no woman getting under 25 seconds in the final. Di Pietro got to the wall first in 25.39, followed by Aglaia Pezzato in 25.57. Nicoletta Ruberti rounded out the top 3 in 25.75.