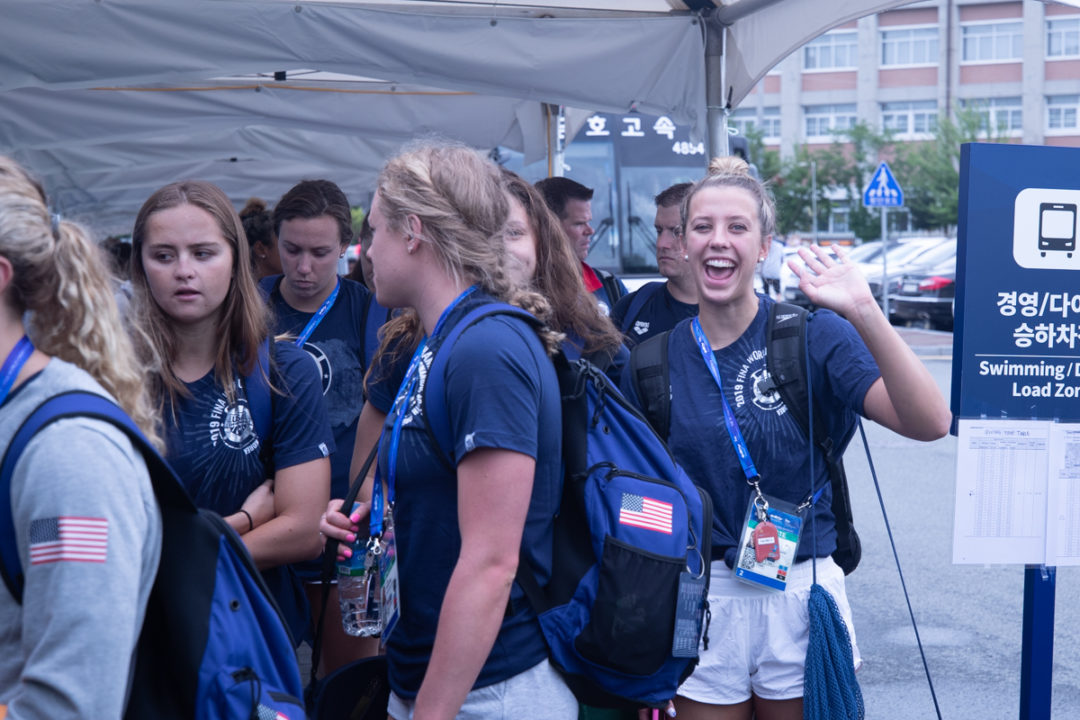 In spite of a lot of handwringing from fans of Team USA, the United States is doing better at the 2019 FINA World Championships than they did in 2015. Current photo via “Rafael/Domeyko Photography”

In spite of a lot of handwringing from fans of Team USA, by most statistical measures, the United States is doing better at the 2019 FINA World Aquatics Championships than they did in 2015. So far, the 2019 Americans have placed more swimmers in finals, have finished higher, on average, in the events, and have earned more medals than their 2015 counterparts.

(Note: we recognize that 2015, where the American men’s 4×100 free relay didn’t even final, isn’t a particularly high threshold. However given Team USA’s performance at the 2016 Olympic Games in Rio, the reports of American swimming’s death in 2015 were greatly exaggerated, to paraphrase Mark Twain.)

We looked at Team USA’s performance through the first three days of competition – plus in the men’s 800 free and women’s 200 free finals since we already know the outcome for American swimmers in those events – and found the numbers to be nowhere near as dismal as feared. Americans have only missed three finals this year, versus five in 2015; their average event placing is 7.9 versus 8.2 in 2015; and they have won seven swimming medals versus six in 2015.

If we add 2017 to the mix, it becomes more apparent why fans are quick to judge the Americans’ performance. But the truer comparison, if we’re looking at apples-to-apples, is the World Championships that take place in the year before the Olympic Games. Not only is the selection process different, but the athletes themselves are in a different part of the quadrennial cycle and it makes sense to look at those figures side-by-side.

When you consider the statistics include the women’s 1500 free and 200 free, both of which Katie Ledecky scratched for medical purposes, the comparison to 2015 looks even less bleak. Although, those prodigious absences are probably contributing to the general sense of gloom that most fans are probably feeling.

So what can redeem this meet for the Americans? Well, Team USA still has a few gallant knights of the pool who could roar in and salvage this meet, at least enough to dull the points of the pitchforks.

Slice it any way you want- USA is performing horribly.

That’s really not true… this is a separate issue from the selection process, but if you look at the swimmers who are actually there, it’s more so-so than bad. Day 3 was awful, but Day 1 was actually pretty good. Overall there have been plenty of good swims, but overshadowed by Ledecky’s sickness and a few high-profile misfires (Murphy, Haas). Grothe, Dahlia and Seliskar struggled… also Baker, but that was predictable (and predicted) since she broke her ribs and missed training this spring. Same for Shoults. On the other hand, the 4 x 100 relays were terrific. Smoliga, Smith and McLaughlin were solid to good. Wilson, Andrew, Grevers, all just fine. Manuel, Kalisz, Conger, Dressel, Smith, Prenot, Flickinger, Drabot, Comerford… Read more »

You basically support OP’s point: you list more names of those who have failed than those who haven’t. At this point, they are performing horribly.

I listed about more than a dozen people doing well (including most of the relay swimmers) vs. half as many doing poorly… the results speak for themselves. It’s not a 10/U age group meet where everyone goes a best time.

the US is performing badly at this meet. that’s a true statement. it means almost absolutely nothing for next year, if that’s your point- then it’s not true. but, yes, the US is having a cringe worthy meet on pretty much every level except the 400 free relays (are we really striving to be a country that just has good relays..?)…in the end, this may be the final lesson for the bad selection process. I was at US Nationals in 2018, it feels like so long ago..i can’t believe there is an international meet going on that picked swimmers from that meet when (as everyone has alluded to) there are age groupers in the US that would medal here…sad. if… Read more »

As a Brit, we’d have a national holiday if we performed the way the US is!

It might not meet expectations, but it’s still dreamland for most countries.

that’s like comparing the worst meet to the second worst meet.

US had 2 winning individual athletes in Olympic events 2015.
Japan had 3.