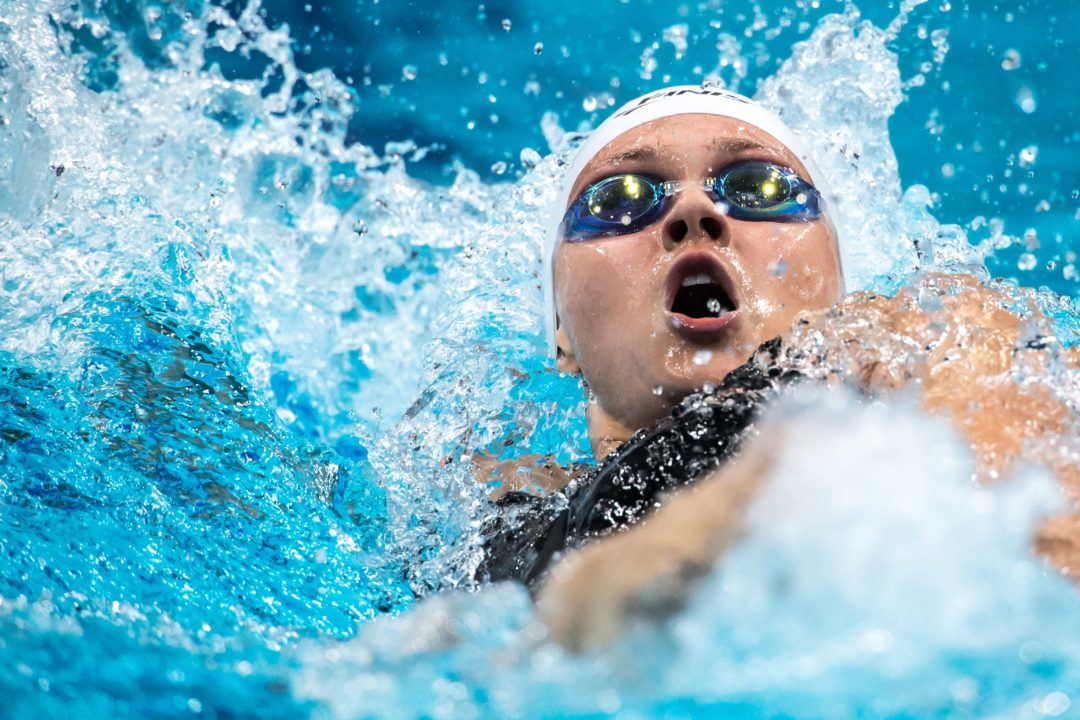 Tonight, the finals of the 200 fly, 50 free, 100 back, 200 breast, 50 fly, and 400 free will be contested. Caeleb Dressel and Michael Andrew will face-off again after Dressel won the 100 fly on Thursday while Andrew finished in 8th. The duo will meet up in the final of the 50 fly, where Dressel is seeded first while Andrew is seeded third. Yesterday, Dressel won the 200 free and 100 fly. Tonight, Dressel has a shot at swimming his second 2-for-2 win performance.

Veterans and age group-standouts will clash in the final of the women’s 100 back, with 18-year-old Katharine Berkoff leading the seeds as the only woman under one minute (59.78). Right behind Berkoff is Olympic gold medalist Olivia Smoliga, Pan Pacs champ Lisa Bratton, Olympian Hali Flickinger, and 14-year-old Claire Curzan. Amidst the battle, Curzan will be gunning for her second NAG of the meet, as her seed time of 1:01.08 lurks behind Regan Smith’s 13-14 NAG of 1:00.26.

Curzan will also have a showdown with Kelsi Dahlia and Farida Osman in the women’s 50 fly after taking second to Dahlia in the 100 fly on Thursday. Osman is seeded first with a 26.32, however, the 14-year-old Curzan is seeded second with a 26.37. Dahlia lurks behind Amanda Kendall in fourth. Can the 14-year-old defeat these veterans in a good-old fashioned splash-and-dash?

With Michael Andrew out of the 100 back A-final, Olympians Ryan Murphy, Jacob Pebley, and Matt Grevers will still have to face NCAA champ Coleman Stewart, who was sub-55 in prelims. In the B-final, 14-year-old Josh Zuchoswki could also gun for a NAG of his own. His prelims time of 57.48 is just three-tenths off his PB of 57.11, which is eerily close to Michael Andrew‘s 13-14 NAG of 56.83.

Katie Ledecky is scheduled to swim an interesting meet line-up tonight. First up for Ledecky is the B-final of the 50 free, where she is seeded 15th. Then, Ledecky will octuple the distance and swim the 400 free final, where her and Leah Smith are the lone sub-4:10 swimmers from prelims.

Hali Flickinger held off Katie Drabot and Kelsi Dahlia in the last 100 of the race, earning the win in a 2:07.03. Flickinger knocked off 0.06s off her season best of 2:07.10 and ties herself as the 2nd-fastest time in the world with Japanese swimmer Yui Ohashi.

Chase Kalisz was even with Bulgarian Antani Ivanov heading into the final 50. However, the 20-year-old Ivanov held off Kalisz into the finish with a now 16th-fastest time in the world (1:56.34). Kalisz settled for second with a 1:57.03.

Out of lane 7, Olivia Smoliga pulled out the win over Simone Manuel and Farida Osman. Smoliga’s winning time of 24.83 just put herself in the top 20 times this year. Manuel and Osman tied for second, both sub-25 with a 24.97.

Both Michael Chadwick and 4th-place finisher Jack Conger tied or bettered their personal bests. For Chadwick, he tied his 2016 Trials PB with a 21.96. For Conger, he swam a new personal best with a 22.41.

Just 14 minutes after winning the 50 free, Olivia Smoliga surprised herself with a new PSS record and personal best time, winning in a 58.73. That is now the 3rd-fastest time in the world this year behind Canadians Kylie Masse and Taylor Ruck.

Annie Lazor continues her thrilling year, winning yet another PSS 200 breast title with a 2:23.22. Her PB from Des Moines of 2:22.99 remains the 4th-fastest time in the world. In a tight race for second, Bethany Galat turned it over and passed up Emily Escobedo to out-touch her by 0.23s. Both their times just entered the top-25 times in the world.

Josh Prenot use his lethal back-half to pull away from the field and win with a comfy time of 2:11.51. This is Prenot’s 2nd PSS 200 breast title after winning in Knoxville. Runner-up Nic Fink was the Des Moines title winner and finished this time with a 2:12.15.

Egyptian Farida Osman had a stellar 50 fly final tonight, breaking Kelsi Dahlia‘s PSS record with a 25.65, maintaining her #2 spot on the top-10 times in the world. Dahlia settled for second place with a 25.90.

For 14-year-old Claire Curzan, her 3rd-place time of 26.18 was nearly two-tenths faster than her prelims time of 26.37. Her time is also the 15th-fastest time in the world this year and the 9th-fastest U.S. performer all-time.

Caeleb Dressel has officially went 2-for-2 tonight with his win in the 50 fly. This is also his second time defeated Michael Andrew tonight, out-touching the 19-year-old phenom by 0.11s. Dressel’s time is the 12th-fastest time in the world this year. Andrew was the Des Moines winner of this event, where his winning time of 23.36 remains the 7th-fastest time in the world.

Swimming the 2nd-fastest time in the world, an unsual position for this star, was Katie Ledecky. Her winning time of 4:01.50 is just 2 seconds off of Aussie Ariarne Titmus’ leading time of 3:59.66. Leah Smith‘s second place time of 4:05.17 bumped her up from 15th to 5th in the world this year. Third-place finisher Kaersten Meitz took third with a 4:09.20, just sneaking into the top-25 times in the world.

Picking up his 5th PSS win was Denmark-native Anton Ipsen, who held off Zane Grothe 3:48.22 to 3:48.53. In Des Moines, Grothe out-touched Ipsen and took the win. But this time around, Ipsen was able to hold and maintain his lead. Both Ipsen and Grothe’s times are right outside of the top-10 times in the world this year.

Ipsen is also qualified for the 2019 World Championships this summer, scheduled to swim the 800/1500 free and 400 IM for Denmark.

Smoliga in the 100 back interview very quietly saying to herself, “That’s wassup” hahaha

4:01 is pretty normal for Ledecky at PSS meets. She did it on multiple occasions. The only difference is that in previous years this in-season performance made her a dominant leader in world ranking. Now her results are measured against times shown by Wang Jianjiahe and Ariarne Titmus at their Nationals meets. And these times are very challenging and I would say are of highest historical level if to forget for a moment about Katie’s existence. They cover all spectrum of Ledecky’s versatility: from 200 to 1500. The times of Wang and Titmus are their personal bests and the most important question is of how far they can go beyond these points if at all. So they can approach the… Read more »

I don’t understand all the false hope around here. Rio was always going to be her peak. The announcers simply did an inept job of portraying as much. I was laughing like heck when Bob Costas all but insisted on greater heights in 2020 and 2024. I wasn’t posting here at the time but most likely the brutal conventional wisdom of continued improvement attached here as well.

What does your brutal conventional wisdom say about Leah Smith’s improvement in 800 making her a real medal contender in competitions of the highest level? She passed long time ago your “19 years old” threshold beyond which you deny any improvement in long distances for women. She is two years older Ledecky.
What Katie showed in Rio was phenomenal and those world records may not be beatable for long time by anybody including Ledecky. But this fact doesn’t exclude possibility that she can swim next to them. And it will be more than enough for the dominant wins. She was 8:07 and 3:57 two years after Rio.
If you don’t understand then don’t use it as an… Read more »

The time when no matter what you do you are getting faster with the age has probably ended for Claire Tuggle. Now her progress is depending on technique improvement, proper training, targeting particular meet of the season etc – all this stuff that mature swimmers do. Her last LCM season that she entered being 13 years old was very loaded and very well performed from Spring till Autumn. I’m not sure but maybe there was a hope of getting qualified for the National relay team. The 1:38 and 4:10 were very impressive from 14 years old girl.
At this meet we see some improvement from the meet in Knox in January but still pretty far from her bests. She… Read more »

But did you see the King come home in that 2 fly?

MA and CD rivalry/competition….reminds me of the other Michael and Ryan Lochte match up. Fun for everyone and a joy to watch!

Bet it bothers Dressel that it’s even considered a rivalry. Phelps would get so annoyed when people would talk about Tom Shields.

I think Dressel’s more bothered by his summer performances than MA beating him.

First thing’s first: I’ve met Michael and his family several times, he grew up swimming in the LSC I coach in– he’s a really nice kid, never got a selfish vibe from him. Obviously, being a pro, he’s concerned about branding and exposure, but so is every pro who doesn’t have six-figure endorsements. That doesn’t make him a narcissist, it makes him savvy. He’s not afraid to play the game, and he’s doing it well. Some of my swimmers who were around his age were friends with him, and they still stayed in touch even after he went pro and became a big deal, which doesn’t sound like something a narcissist would do.

Please tell me they have colored lane lines, or we will never hear the end of it from Woke Stasi

So if you say you are going to have the A finals on the Oly Channel, then have them all. As soon as Ledecky finishes they are out of there. “Luckily” (since I really want to see whole meet) I had USA stream up for B heats and got to see Men’s 400 Free A final.

MA spending too much time on the beach.

MAs training is way different tho

He surfs between morning and afternoon practices. Are you suggesting he takes longer naps? He’s 19. He can handle both.

MA spending too much time not doing real training

he can stil call Durden for some tips ….he doe snot live far form there .