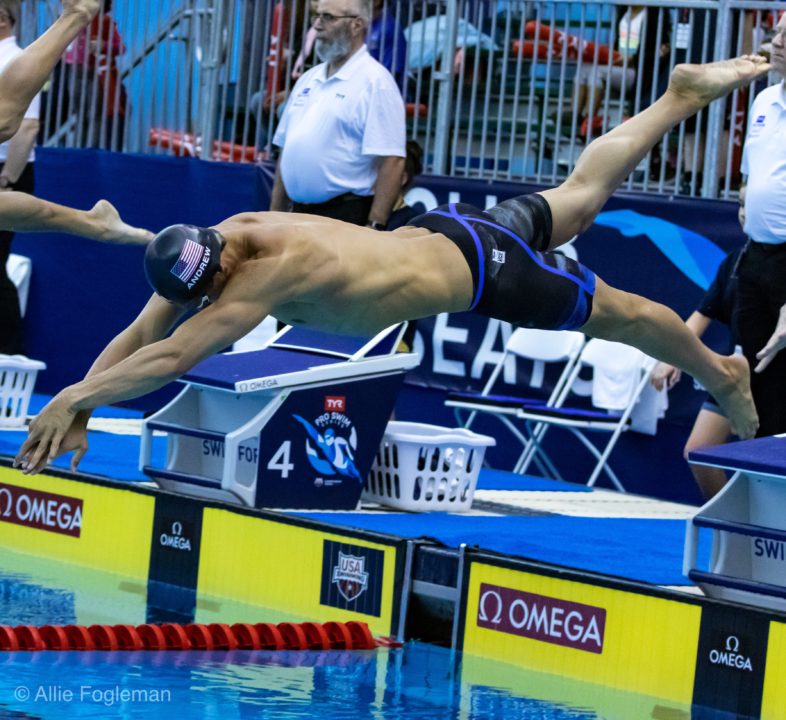 Michael Andrew and the Adams Family lead the SwimSquad points battle, but with the national team splitting between Bloomington and the Atlanta Classic, this month's SwimSquad starting lineups could be a little thinner than usual. Archive photo via Allison Fogleman

We later learned that Comerford’s scratch on Night 3 was to go to a teammates wedding in Columbus, Ohio, a 4-hour drive from Bloomington

After being the only swimmer sub-54 in the prelims, Simone Manuel got the job done tonight in the A final. She posted a 53.65, a touch off of her morning swim.

The Bloomington meet will get entries from a number of NCAA swimmers who were absent early in the tour, but that’s countered by the presence of the Atlanta Classic, which is splitting most of the top swimmers between two meets. That Atlanta meet pulls quite a few of the top SwimSquads names, including Chase Kalisz, Caeleb Dressel, Olivia Smoliga, Hali Flickinger and Gunnar Bentz.

Some squads here will be a little thin, and we have at least one case in which a swimmer is entered in both meets, meaning that team will have to determine where the swimmer is swimming before making a starting decision.

With Kalisz out, DiRado probably has to rely on Eastin to fill her IM spot. (Galat is only in the 400 IM). With Eastin already slotted in, Conger is the only flyer active, though he hasn’t swum a long course 200 fly since Pan Pacs last summer.

DiRado has her pick of breaststrokers: Fink and Miller are equally good options. Fink has been pretty consistent this season, but Miller had a better meet last month in Richmond. Miller might be the pick in his home pool, but we’ll take Fink, only because he’s been second in the 200 breast on all three stops so far, and Knoxville/Des Moines winner Josh Prenot isn’t active this meet.

Manuel is probably a safer bet in the sprints than Adrian, who is a relative unknown coming off of surgery for testicular cancer earlier this year. Still, Adrian has typically been the most reliable swimmer on the Pro Swim Series, and if he’s anywhere near his normal level of fitness, he’s almost guaranteed double digit points. We’ll throw him in the flex role, though Miller could also be a great option there. Moore is another good candidate – she’s got to deal with Katie Ledecky in the 400 and 800, but has the mile all to herself.

There’s no active backstroker on the roster, unless you want to pull Conger (who is only entered in the 100 back and is a longshot to score) or Manuel (entered in the 50 back, but not a scoring favorite by any means). It’s probably better in the big picture to leave that spot open and get max points from those two.

The obvious ones first: when you have Katie Ledecky, you start Katie Ledecky. The presence of Taylor Ruck is probably enough of a threat in the 200 to stick with 400/800 for Ledecky’s events, even if there’s an off chance she heads home before Sunday night’s finals, including the 800 free. Meanwhile Lazor hasn’t been beaten in the 100 or 200 breaststrokes in three PSS meets this year, so you keep riding the hot hand. Even with Lilly King joining the PSS, Lazor should still be a regular double-digit scorer.

The butterfly races come down to Shields or Gibson. Gibson hasn’t competed on the PSS yet this year, but had some nice swims at a local sectional meet. Shields has been a consistent-if-not-dominant scorer this year.

Margalis is technically active… but she’s entered both here and in Atlanta. The latter seems a lot more convenient for Margalis from a travel perspective, so we’d hesitate to start her unless we knew she’s planning to compete in Bloomington. That would leave Sam Stewart as the best IM option, though he’s only swum two long course meter races this season.

Bratton is the only real backstroke option, so they fill their spots pretty easy.

The flex would be a good spot for Wilson, who would be starting on most breaststroking rosters. But the way Mallory Comerford tore it up at Brazil’s national meet last month, it’s hard not to start her this time around in her first PSS meet of 2019.

Beisel’s got her work cut out for her to catch up (and maybe she’s been distracted by reportedly living on a desert island for the last month or so), but she’s got a good mix of active swimmers in Bloomington, including two star freestylers who will be competing in their home pool. Zane Grothe has become a must-start for the past two years in the distance freestyles, but Blake Pieroni was good enough (1st in 100 free; 2nd in 200 free) in his lone PSS appearance so far this year that he makes a compelling case for the free role. We’ll fit both in, using Pieroni in the flex spot.

Beisel has a bunch of good IMers, but Jay Litherland is by far the best option. Devine is only entered in the 200 IM, and Licon scratched out of the 200 IM in his only PSS appearance this year. Licon is also the best breaststroke option active (he won the 200 breast in Des Moines), and so we’ll start him here over Weiss, the high schooler who hasn’t swum much long course yet this year.

Isabelle Stadden had a trio of top-5 backstroke finishes in the series opener in Knoxville, and we’ll start her over Haan, who was OK in Richmond, but not earth-shattering. That leaves butterfly, where it’s probably Katie Drabot or Justin Wright. Both specialize in the 200. Drabot comes down to the 100 better, but isn’t entered in that event, swimming only the 50 and 200 flys. Still, we’ll go with Drabot, who was second in the 200 in Richmond, over Wright, who has been 4th, 5th and 6th in the 200 on the series so far.

Adams is leading by a wide margin, and she gets her best breaststroker debuting this month: Lilly King returns from the collegiate realm to serve as the biggest threat Annie Lazor has seen yet this year. We’ll start King in the 50 and 100, because her speed is unparalleled, and there’s still a chance Lazor can beat her in the 200.

Kelsi Dahlia is the obvious butterfly start – she’s undefeated in the 100 fly so far this series, and has been top 4 in all eight of her buttterfly swims, between the 50, 100 and 200. Adams has gotten big points by using Michael Andrew as a flex starter, and the presence of Margo Geer (who’s been on fire so far this series) and Lilly King allow her to fill her free and breast roles. We’ll say it again on Andrew: start him in the 50 back. He’s gunning to wrap up the second World Champs entry in that race, and he’s won it on all three stops of the tour so far, even beating Ryan Murphy in Richmond. Andrew has also won two of his three 50 free starts, taking second only to Caeleb Dressel in Richmond. Dressel is in Atlanta instead of on the PSS this week, so Andrew only has to beat Nathan Adrian there.

Regan Smith hasn’t appeared on the series since January, but swept the 100 and 200 backs at that meet. The only real hole for Adams is at IM, where she’s got to choose between a handful of athletes who will probably only score in only one IM race: Ally McHugh (400 IM), Charlie Swanson (400 IM), Asia Seidt (200 IM) and Emily Escobedo (200 IM). We’ll take the national 400 IM champ McHugh, who is actually entered in the 200 IM, but isn’t likely to score from the 37th seed.

All-in-all, the Adams Family is making this competition less-than-exciting by being so good. Adams should increase her points lead this time around, particularly if King sweeps her events.

This should be the month for Beisel to make a run, as she’s got a pretty solid roster across the board. Pieroni could be the powerhouse there, taking advantage of a thinner men’s sprints field. We’ll actually predict Beisel to pass DiRado for 3rd, though she probably doesn’t have enough to pass Jaeger quite yet. If Margalis does arrive in Bloomington to compete, Jaeger could make up a small amount of ground on Adams, and will probably hold off Beisel either way.

Adams squad will have plenty of luck here. DiRado won’t have the best meet here, so Beisel does have a chance. Nice predictions. This should be the best PSS meet this season. Can’t wait!

Regan Smith will very likely be great at this meet. We haven’t seen her in a 50 meter event since the Knoxville stop. In March she was superb short course with the double American Records 45 minutes apart. I believe she goes lower in the 100 Back than Smoliga did in Richmond. Probably a personal best in the 200 back as well. She has Taylor Ruck head to head in the 50/100/200 backs and those two always bring out the best in each other going back to Jr Worlds in 2017. Probably a monster 200 Fly for her too with Eastin and Drabot to race. Looking forward to this as a preview for Worlds performances this summer.

Melanie Margalis is entered in both Atlanta and Bloomington. Jaeger might want to touch base with her before he picks his team

Sam Stewart is entered? Why didn’t he swim this winter for Texas? He is unatt, where is he training?