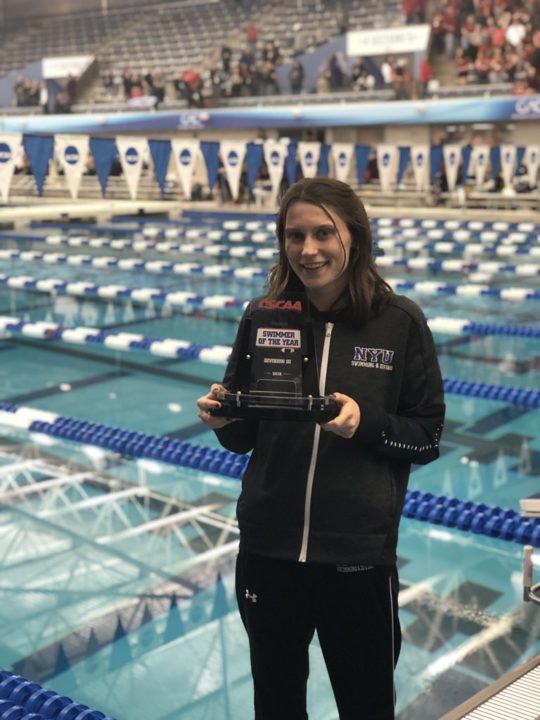 After winning three individual events at the 2019 NCAA Division III Championships - and setting a new national record in the process - NYU's Honroe Collins was named Female Swimmer of the Year. Archive photo via Twitter/NYU Athletics

At the conclusion of the 2019 NCAA Division III Championships, the Emory women claimed their 10th straight national championship, while the Denison men successfully defended their title for the two-peat. Despite the victories of these two teams in the team standings, every post-meet award was given to athletes or coaches from other schools.

NYU junior Honroe Collins was named the Women’s Swimmer of the Year. Collins was a three-time individual event winner at these championships – she won the 200 and 400 IMs, as well as the 200 fly. In the 200 IM, she broke Crile Hart‘s NCAA Division III record of 1:58.29 from last year, lowering it to a 1:58.18. This is the first year a NYU swimmer has won this award.

Collins also swam legs on NYU’s 200 and 400 medley relays, and their 400 and 800 freestyle relays – the highest placing of which was the 200 medley and 800 free relays, which both finished sixth overall.

David Fitch of Kenyon, whose innovative butterfly flip-turns has started his rise to swimming stardom, was named the Men’s Swimmer of the Year. The sophomore won the 100 fly and set a new NCAA Division III record of 46.92 on the way, as well as the 100 back in a blazing 46.66, which was merely 0.04 off of the national record.

Fitch also placed fifth in the championship final of the 50 free, in which he clocked a 20.08 for a new personal best. He also lead off Kenyon’s 200 freestyle relay, and contributed splits on their 200 and 400 medley relays.

His coach, Jess Book, was named the NCAA Women’s Coach of the Year award. The Kenyon Ladies had a tight team race with Emory throughout the entire meet, and although they ultimately finished second in the team scores, they only barely missed out on usurping the defending champions by nine points.

The Ladies picked up individual event wins from sophomore Crile Hart, last year’s Women’s Swimmer of the Year, in the 100 and 200 backstrokes. Kenyon’s Delaney Ambrosen, Abby Wilson, Crile Hart and Hannah Orbach-Mandel won the 800 free relay in a final time of 7:17.43; while Wilson, Orbach-Mandel, Emmie Mirus and Hart also claimed the top spot in the 400 free relay with their combined time of 3:23.86.

Washington University in St. Louis’s Brad Shively was named the NCAA Men’s Coach of the Year. The Bears earned their highest team finish in program history, tallying 221 points to finish in fifth place.

The Wash U. quartet consisting of Peyton Wilson, Kevin Van Cleave, Andrew Pek and Gregory Van Patten upset top seed Denison in the 400 medley relay, winning the event with a final time of 3:14.17 ahead of the Big Red’s 3:14.29 for second. The Bears also got an individual national champion out of Brandon Lum in the 200 fly, the NCAA record holder in the event, who recorded a final time of 1:45.48. Van Cleave was the national runner-up in the 200 IM, in which he clocked a 1:47.19.

Becky Benson, head diving coach from University of Chicago, was named the NCAA Women’s Diving Coach of the Year. The Maroons had a whopping four divers qualify for the national meet: freshman Elizabeth Cron and Alice Saporov, junior Agnes Lo, and senior Anna Girlich. Lo recorded Chicago’s highest finish of the meet, as she claimed the runner-up spot in the three-meter competition with a final score of 486.35. This was the first season of Benson’s role as head diving coach.

Amherst’s Lindsey Ruderman was named the Women’s Diver of the Meet. The sophomore swept both the one-meter and three-meter diving events, amassing 493.75 points in the former, and 498.45 in the latter. Her two individual event wins marks a significant improvement from her freshman debut, where she finished sixth on one-meter and fifth on three-meter.

The Lake Forest duo of senior Heath Ogawa and Coach Nathan Lightman were named NCAA Men’s Diver and Diving Coach of the Year. After placing first on the three-meter and third on the one-meter last year, Ogawa finished off his collegiate career with his first national title in the one-meter winning the event with a final score of 537.65. He also went on to place fourth in the three-meter, earning a total of 535.75 points. This is Lightman’s second season as the head diving coach for the Foresters.

Do we have butterfly flip-turns videos?

See the comments on the original article: https://swimswam.com/kenyons-david-fitch-flip-turns-his-way-to-new-ncaa-d3-100-fly-record/

Shoutout to Brad Shively for winning men’s coach of the year, no one deserves it more

No doubt! Loved Coach Shively at Kzoo back in the day… before he rose up the coaching ranks! Over 25 yrs ago now! Dayum

Congratulations Honore! Some great swims throughout the weekend. A well deserved award!

1) Honore Collins.
2) Why only pictures of the men? Where are the pics of Collins, Benson and Ruderman?

Honore is the headline photo. Benson and Ruderman aren’t shown, but neither is Shively.

I unfortunately couldn’t find any quality pictures of them, or any at all. If anyone has pictures they’d like to share, please send them our way!

I have a picture of Coach Shively with his award – how do I send?

Hi Vicki – you can send to share@SwimSwam.com. Thanks!