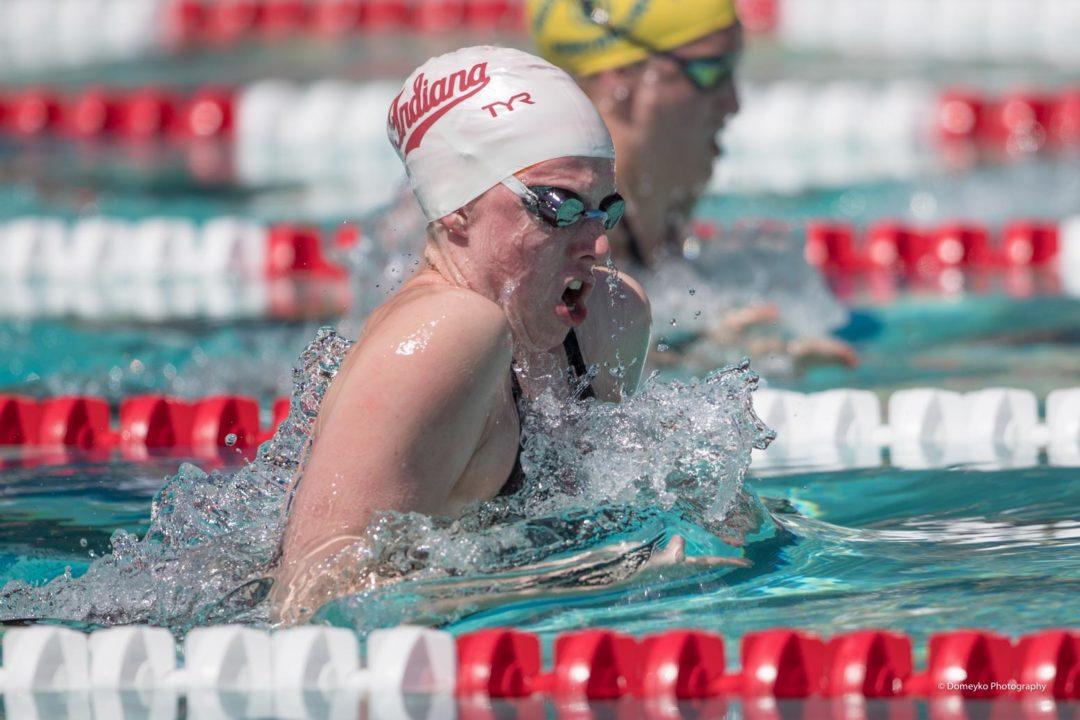 Katie Ledecky likely has a 1:53 in her at some point this season – but this meet, for which she had no reason to rest, might not be it. The US Open record in the event currently stands at 1:54.40 (held by Allison Schmitt, who will also race), with Ledecky’s best time this season at 1:54.56, so that could be in reach. Also in the mix should be Mallory Comerford – who in March became the 2nd swimmer in history to break 1:40 with her NCAA-winning 1:39 in the 200 free – as well as  Simone Manuel and Leah Smith who, like Ledecky, are already locks the Pan Pacs team but have big-time potential should they choose to focus on the event. The most exciting storyline to follow here should be the returns of Schmitt, the Olympic champion, and Missy Franklin, whose lifetime best puts her behind only Schmitt and Ledecky in the field.

Blake Pieroni threw down an unexpected 48.08 to win the 100 free Wednesday night (even he thought he would struggle in the event), so it’s clear he’s brought his A-game to Irvine. And after becoming the first man to break 1:30 in the short course race earlier this year, it would be foolish of us to put a limit on what he can do. But Pieroni would have to take out Townley Haas, whose lifetime best of 1:45.03 is well over a second faster than his own (1:46.30). Both would have to fend off Jack Conger, who’s season-best of 1:46.96 makes him the only American under 1:47 this year. Another swim of particular interest is Conor Dwyer‘s. After only racing one previous 200 free this year, Dywer dropped a 1:47.25 two weeks ago at the LA Invite, good for No. 2 in the nation. Additionally, all eyes will be on Caeleb Dressel, who did not qualify for Pan Pacs with his surprising 6th-place finish in the 100 free yesterday.

This event is deep, and after narrowly failing to qualify for the 2017 World Championships team, Olympic silver medalist and American record holder Josh Prenot will take his shot at a return to the top of the U.S. 200 breast field. Tightly packed around him are Kevin Cordes (PR is 2:07.41), Nic Fink (PR is 2:08.56), and Will Licon (2:08.14), so it’ll should be a fun race. Other swimmers to look out for are 18-year-olds Daniel Roy and Reece Whitley, who went 1-2 in this event at the 2017 World Junior Championships. We’ll also get a look at Chase Kalisz, who is known for mostly his IM prowess, and broke 2:10 for the first time in May.

Kathleen Baker is the favorite to win, but Regan Smith is a big potential threat. Smith, who started out her meet with a huge drop in the 200 fly Wednesday, took second to Baker last year, and then came within a second of her at Worlds – Baker’s best is 2:06.38, while Smith’s is 2:07.19. Behind those two are a cluster of swimmers with PRs in the 2:08-2:09 range, led by Asia Seidt in 2:08.91 (season and lifetime best). Also in that range is Lisa Bratton, the 3rd place finisher from the 2016 Olympic Trials, who ha been putting up sub-2:10 performances in championship meets consistently since 2015 – she could be on the cusp of a breakout meet. We’ll also get a look at sprint backstroker in Olivia Smoliga, entered with a 2:10.12.

Cal teammates Ryan Murphy and Jacob Pebley have been the two best 200 backstrokers in the US. this year (1:55.46 and 1:55.85 respectively), and it’s not close. But this leaves the third spot on the podium up in the air. Behind the aforementioned duo, Austin Katz emerged as the third-fastest American in 2017, but has only been 1:59.40 this year. He was 5th at the Olympic Trials in 2016, 5th at World Trials last year, and then had a breakout of sorts in winning silver at the World University Games last August – he then became the only freshman to win an NCAA event this year in the short course version of the race. Expect him to go head-to-head with Carson Foster, the fourth and final American to break 1:58 in 2017 (1:57.87 PR, 1:59.05 this year).

Kelsi Dahlia, whose AR stands at 25.48, has already come close to that mark this year. At the Mesa PSS, she clocked a 25.74, and she’s still the only American under 26.0 over the last three years besides Dana Vollmer (not competing), who was 25.87 in 2016. Dahlia will seek to lower her AR, and she’d be taking out the US Open while she’s at it — it stands at 25.50 held by sprint legend Dara Torres. Behind her, it’s anyone’s race. Kendyl Stewart has the next fastest PR in the field at 25.93, and after an extended down stretch, she had a breakout 100 fly at the LA Invite two weeks ago, going her best time in years (and the No. 2 time in America this year), making her a threat to go sub-26 once again. Other challengers should include last year’s silver medalist Helen Moffitt, Amanda Kendall, and breakout NCAA flyer Erika Brown.

If Caeleb Dressel does actually swim this race today (it would be his second event), it’s his to lose. He’s the only American with a PR under 23 (22.76), though his season best of 23.59 trails Michael Andrew’s of 23.16. Andrew would be the clear favorite shoudl Dressel scratch. Others to watch out for should be recent NCAA grads Ryan Held, Justin Lynch, and Andrew Liang, as well as veterans Tripp Cooper and Giles Smith – and we can’t forget Tom Shields, whose 200 fly last night was the best he’s been since Trials two years ago.

Anyone think that Katie has the WR in 200 free in her? Obviously not this meet since not rested at all but in future whether in be Pan Pacs or Worlds next year or 2020 Tokyo?

i think she has what it takes ….

I think Haas has a good shot in Tokyo (Pieorini might have a shot too) but it won’t happen today… I do think they’ll hit 1:45, and at least one other guy will get there, too. Grothe looks good. Conger not so much, but maybe his freestyle is in better shape than his fly. I think you have to add Rooney and maybe Levant and SuperDean as serious relay contenders. Zack Apple? I don’t expect Dwyer or Bentz to make it, but not impossible. I feel safe predicting that Dressel will skip the 200.

Forgot a few relay contenders, like Harting or Seliskar… probably still forgetting a few. I don’t think any of the other juniors are ready for that 1:46 low. Morning racing will be fierce – could be like the 100 where some guys struggle to match their time tonight.

it will be between Haas and Pieroni , great battle in perspective . Lets see what the others will show as well …

After how predictable the men’s events were yesterday, I now feel confident picking Seliskar and Kibler to go 1-2 in the 200 Free, Roy and Nowicki in the 200 Breast, and Austin Katz to take the 200 back! Easy!

You didn’t pick Dean Farris to win the 200 free? Incredible.

Vote Up15-3Vote Down Reply
PK Doesn't Like His Long Name

That feels too predictable.

(sidenote: the last non-circle seeded heat of the 200 free will be pretty fast with Harting/Kibler/Farris all in it)