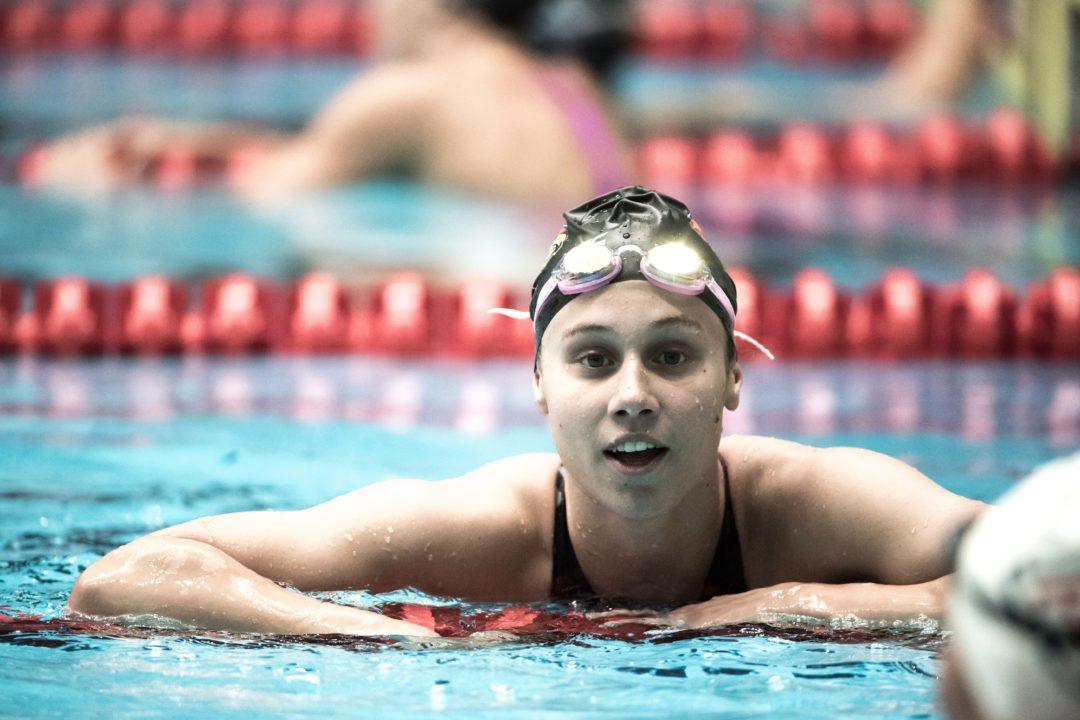 Mallory Comerford was one of several swimmers who had stand out meets last week at the 2017 U.S. Nationals and World Championships Trials. Current photo via Mike Lewis/Ola Vista Photography

Pierce Becomes FSU’s First Woman Ever in A Finals at U.S. Summer Nats

Pierce, who was seeded 24th in the 50 breast, worked her way up to a 7th place finish in prelims, successfully becoming the first Florida State woman to qualify for a championship final at a long course U.S. Summer Nationals.

Last week we watched one of the most exciting and fastest U.S. Summer Nationals we’d seen in years.  The meet, of course, doubled as the USA’s World Championships Trials for later this month in Budapest, as well as the World University Games and the junior World Championships.  With a few days to reflect, here’s our list of the some of the swims and swimmers that stood out to us last week in Indianapolis.

Honorable Mentions:
Lilly King – You know it’s a deep field when someone who swept the breaststroke events, setting a US Open Record in the process, only gets an honorable mention.  King set up a showdown with Yulia Efimova in Budapast, as the two ladies are ranked 1-2 in all three breaststroke races heading into Worlds.
Leah Smith – We seriously considered putting her over Ledecky here.  Smith won two events (400 IM and 1500 free) and finished 2nd to Ledecky in the 200, 400, and 800 freestyles.  She’s going to have a tough schedule in Budapeast, but can very conceivably medal in four individual events if she can navigate the schedule.

People have been comparing Dressel to Matt Biondi for at least the past four years, and this week showed why,  as he left the pool rocking time and time again.  He won three events (50 fly, 100 fly, 50 free), placed 2nd in the 100 free, and even qualified for the 4×200 free relay.  Like Smith, he’s now set up for a busy, yet exciting, schedule at Worlds.

Honorable Mentions:
Kevin Cordes –  Like King, Cordes swept the breaststroke events and earned an American Record and should be in contention for medals in all three races in Budapest.
Chase Kalisz – Already the Olympic silver medalist in the 400 IM, Kalisz took one of the 200 IM spots vacated by his former training partner, Michael Phelps.  Kalisz swept the IM’s, including a world-leading time in the 400IM, and nearly made the team in the 200 fly.

We knew she’s the best distance swimmer not named Katie Ledecky, but we didn’t know she had an elite-level 400 IM as well.  Smith was out first, briefly lost the lead during the second 50, but quickly regained it and held on till the end against a very tough field.

Honorable Mentions:
Katie Ledecky, 400 free – It seems odd to relegate the 3rd-fastest swim in this event ever to an honorable mention, but we guess this is where Ledecky has been a bit of a victim of her own success.
Lilly King, 50 Breast – King knocked 0.14 off the previous US Open and American Records, part of a dominant breaststroke sweep this week.

Cordes had an impressive week, but this race was the best of three.  He kept his long stroke together as he held off a very deep field.  That field included Cody Miller, who had taken the American Record from Cordes last year, but Cordes reclaimed the title as fastest American ever in this race, with a 58.74.

Yes, we already covered with the previous award, but this was one of the most open races of the week, and it delivered on the drama.  Smith was in the lead after the fly leg and continued to hold, then tension built as Eastin and Beisel battled for second, only for a flipflopping of emotions as Eastin drew a DQ and Beisel, the veteran, made yet another World Championships team after an extended break.

Honorable Mention:
100 Freestyle – Mallory Comerford went out fast and came back strong as she held off the reigning Olympic gold medalist in this event, Simone Manuel, to capture her first national title.

Arguably the fastest race ever on US soil.  This appears to be the first time two US men both went under 48 in the same heat in domestic competition.  Both Adrian and Dressel went under that mark in a race that come down to the hundreths.  Townley Haas had his breakout as a sprinter, registering a 48.20, while Zach Apple was just off his 48.14 from prelims.

Honorable Mentions:
400 Free –  Great three-way battle here in one of many close battles on the men’s side.
1500 Free – Although missing some of the biggest names were missing, True Sweetser, Robert Finke and PJ Ransford went back and forth, with Sweetser hanging on for the win.

You could see this coming after her NCAA performances and a solid long course season, and Comferford confirmed that she’s the real deal last week.  She upset Simone Manuel in the 100 free, setting a new US Open record in the process, earned a spot on the 4×200 free relay, and made the A-final in the 50 free, as well.

Honorable Mention:
Dakota Luther – The rising high school senior was #11 on our list of recruits for the class of 2018, and broke onto the national scene in a big way, finishing 2nd to Hali Flickinger in the 200 fly and earning a ticket to Budapest in the process.

The former Auburn swimmer, now training at Indiana, has shown steady improvement since his college days. He’s been lurking on the edge of a breakout for a while, and it finally came with a trio of top three finishes.  He earned a spot on U.S. 4×200 relay team, and very nearly got an individaul spot, going under 1:47.  He followed that up with a win in the 400 free, then a 2nd place finish in the 800.

Honorable Mentions:
Abrahm Devine – We probably should’ve been paying more attention to Devine after his performances at Trials and NCAAs.  But even if we had, we don’t think we would’ve picked him to become the 5th-fastest American ever in the 200 IM; Devine himself seemed rather surprised.
Zach Apple – Who’s Zach Apple?  A common question last week, the answer is now the 8th-fastest U.S. performer ever in the 100 freestyle, and a member of the USA’s 4×100 free squad for Budapest.

There have been plenty of suggestions/complaints about what MA should be doing.  But putting expectations aside, the results speak for themselves.  He made the A-final in five different events.  In the last one, the 50 free – roughly thirty minutes after swam the 200 IM – he beat the reigning Olympic champion (Anthony Ervin) and two of the top college sprinters (Michael Chadwick and Ryan Held).

Coach/Team of the Meet – Jack Bauerle/Georgia

Something’s going right in Athens, as everyone from newcomers (Pace Clark) to veterans who’d missed the Olympics (Nic Fink), seven Bulldogs in total, will repping the Red, White, and Blue in Budapest.

Honorable Mentions:
Ray Looze/Indiana – Putting two current swimmers plus two postgrads is making Indiana look like one of the top places to be right now.
Albert Albiero/Louisville – Other teams put more swimmers on the World Champs team, but few programs have had progressions like we’ve seen out of Worrell and Comerford in their time at Louisville.

Ledecky, Smith, and King were all worthy but I think Baker also deserves a mention. Crushed the field in the 200 back to post the fastest time in the world this year. Beat her own silver-medal pb from 2016 olympics to win the 100 back in a new U.S. open/ meet record and the #2 time in the world this year. Also national runner-up in the 50 back and just missed the final in her “off” LCM event- the 200 IM

Variable results by Car, based on the ages of the Olympians, who retired, etc.

This is amazing analysis.

I enjoy watching MA swim and he has had a remarkable AG career. I also have no issue with the USRPT training, despite what others may think. My concern is what happens for him now? The other swimmers his age and national level will head to college and become part of a team that is greater than the individual, in every situation. With the US system, I think this has been paramount in building a national team that is a “team” first. I hope that he will be able to continue to improve to the National team level, but I fear that his isolation will hamper his efforts to rise to greatness.

He needs competition to push him to the next level of potentially becoming a international level competitor. He will only get that at some pro group. And to do that he will need to let go of USRPT. Unless he makes the switch, I don’t think he will ever be a legitimate contender. He’s not Phelps, he can’t do it alone. Either that or he takes the easy way out and switches his nationality to South Africa to make as many international competitions as possible.

Leah Smith winning the 400 IM was cool. We always see her eating the bubbles of Ledecky, who is unbeatable in the middle and distance freestyles.

Leah got be the national champion and stand at the top of the podium.

Agree on everything but female performance of the meet. 3:58 is too much to ignore, even if she makes it look easy

I’d have to agree, faster than anyone else has ever been

The men’s 100 or 200 breast would have been a better pick than the 1500 free. The race was exciting but the times were average. I am aware Wilimovsky decided to skip this event but the M1500 free is probably our weakest event right now (at least in LCM).