Pierce Becomes FSU’s First Woman Ever in A Finals at U.S. Summer Nats 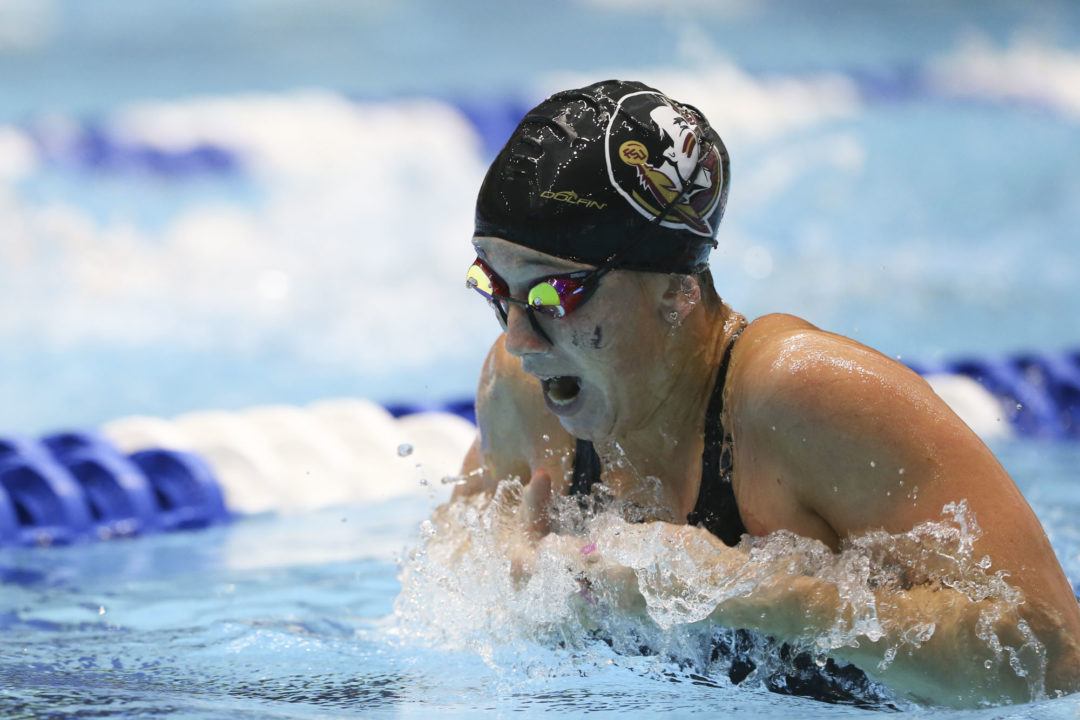 Pierce, who was seeded 24th in the 50 breast, worked her way up to a 7th place finish in prelims, successfully becoming the first Florida State woman to qualify for a championship final at a long course U.S. Summer Nationals. Archive photo via Tim Binning/TheSwimPictures.com

Florida State breaststroker Natalie Pierce had a breakthrough season in 2016-17, and she made program history for the Seminoles yet again the the 2017 U.S. Nationals/World Championships Trials in Indianapolis last week. Pierce, who was seeded 24th in the 50 breast, worked her way up to a 7th place finish in prelims, successfully becoming the first Florida State woman to qualify for a championship final at a long course U.S. Summer Nationals. In the final, she moved up to 4th place overall with a personal best 30.89.

Pierce is not only their first finalist ever among the women’s team, but she’s also their first finalist among both the men and women since 2011, when Mark Weber placed 8th in the 50 free. Their most recent finalists prior to that were Ian Rowe (2009) and Kyle Young (2007) in the 1500 free.

Her elbows come out of the water with a pull that looks like a breast- fly hybrid. Legal?

I hope that is the new rule that the officials focus on enforcing. Meaning no disrespect to the officials who enforced the “Lochte Rule” this week. The rule sucks, they were just doing their job to enforce it. The elbows out, dolphin kicking breaststroke needs to be addressed, because nobody calls it and it is clearly illegal.

Could not have said it better myself

Agreed. I can see how dolphin kicks are tough to call without underwater video, but Pierce clearly has her elbows above the surface (illegal according to the USA swimming rulebook). Watch the 50Br replay on the USA swimming homepage. She’s in lane 1 so it’s a good view. Seems like the officials are hesitant to call any stoke infractions in breaststroke.

I don’t see it. Elbows appear within the rule to me. The rule reads “The hands shall be pushed forward together from the breast on, under, or over the water.”

You made the effort to post the first sentence of the rule why not post the whole thing:

Carrie Ellis an FSU Alum placed 4th in the 50 Free in 2007. So depending on your criteria Pierce would potentially be the first since 2007 but not the first.