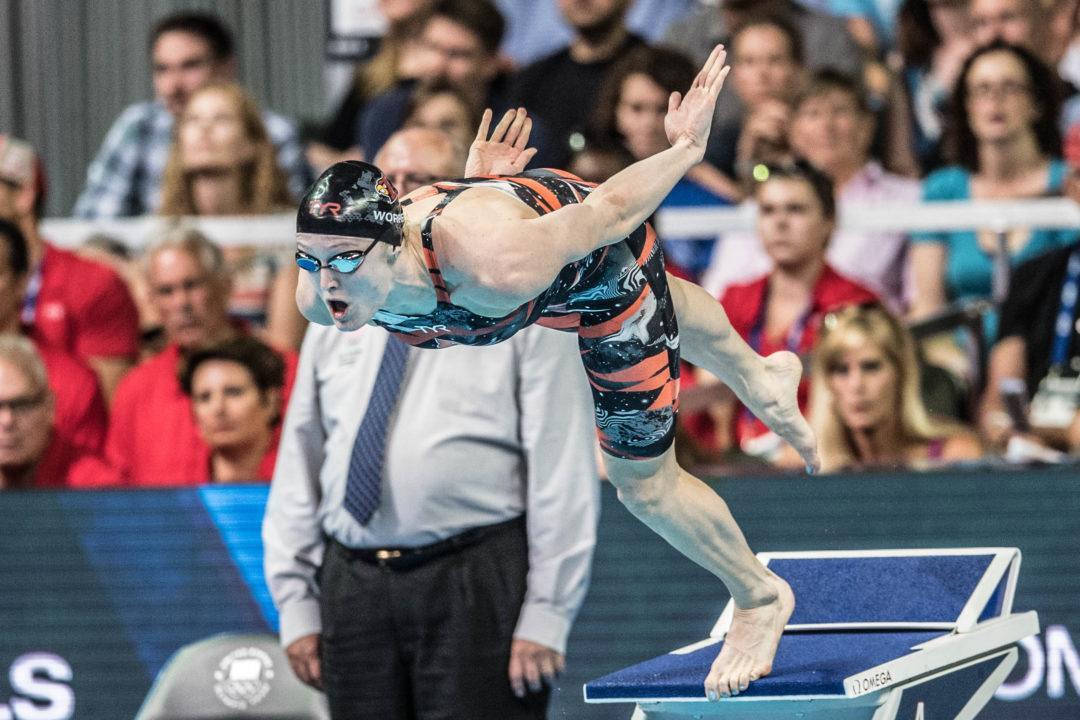 After last night’s twists, turns, and upsets, the anticipation leading up to day two finals has been huge, and with it brings a storm of talent in the women’s 100m butterfly, men’s 100m breaststroke, and women’s 400m freestyle.

Kelsi Worrell will be looking to take down 2012 Olympic gold medallist Dana Vollmer in the 100m butterfly. In Vollmer’s absence, Worrell has stepped into the spotlight, but Vollmer is hungry to get back to the number one spot on the American roster. The two have been toying with sub 57-second swims in both prelims and finals, which puts the U.S Open record at jeopardy tonight.

Last night in semifinals Kevin Cordes broke the American record in the 100m breaststroke with a 58.94 performance. That time ranks him third in the world, and he’s showing no signs of slowing down. If Cordes can hold on, the real race will be for that second spot. Cody Miller‘s got a target on his back with a ton of hungry young talent looking to take him down.

After 200 meters this morning, Katie Ledecky turned off the jets in her 400m freestyle. Tonight, Ledecky is likely going to take the crowd for a ride down world record lane. Every time Ledecky swims this race close to taper, the world record is threatened. Tonight will be no different. Look for Leah Smith and Allison Schmitt to fight for that second roster spot.

Along with the six roster spots on the line, there will be plenty of semifinal action that will set the tone for tomorrow’s finals.

Out fast as she usually is, Vollmer turned first at the 50-meter wall with both her and Worrell already establishing themselves as the clear leaders. Coming off the wall Worrell began to slowly but surely close in on Vollmer.

In the last 15-meters, Vollmer began to tighten up slightly and Worrell flew past her, putting almost a body-length between the two as she stretched out to the wall to punch in her ticket to Rio with a time of 56.48.

Worrell’s last 50 was fast, in fact she split under 30-seconds coming home with a swift 29.97 split to secure her first place position.

Although Vollmer finished behind Worrell, she still managed to touch in for second and will also likely be heading to the Rio Games.

Vollmer was a 57.21 at the touch, still over a full second ahead of third place Kendyl Stewart who grabbed third in 58.22.

Worrell’s time now vaults her to second in the world behind only world record holder Sarah Sjostrom.

Carrying their winning ways from the 2016 NCAA Championships, the Texas men will be heavily represented in tomorrow’s championship final of the men’s 200m freestyle.

In heat number one, it was all Jack Conger who rocked a swift 1:47.15 to give him the second seed overall heading into tomorrow’s final. Conger just out-touched a charging Townley Haas who rocked a 1:47.18 at the wall for third overall.

The second heat pinned Conor Dwyer against Ryan Lochte, but Clark Smith found his way into the mix and the three battled it out ahead of the rest of the field.

Dwyer was strong and controlled, Lochte was milking every little bit out of his incredible underwaters, popping up ahead and playing cat-and-mouse with both Dwyer and Smith in the middle of the pool.

On the final turn, the three were fairly even, but even Lochte’s underwater speed couldn’t hold off Dwyer and Smith. Dwyer ended up taking the final in 1:46.96 followed by Smith in 1:47.49 and Lochte in 1:47.58.

Tyler Clary, Gunnar Bentz, and Jonathan Roberts rounded out the remainder of the top eight.

Interestingly enough, four Texas swimmers will be featured in tomorrow night’s final. The only swimmers who are not from Texas are Lochte, Bentz, Dwyer and Clary.

Lilly King wanted to make a statement during these semifinals, and a statement she made. During the second semifinal, it was all King on the second 50 as she trudged to the wall in a sub-1:06, 1:05.94 performance.

It appears as though the four swimmers will battle it out for the top two spots tomorrow night.

As expected based on their impressive prelim and semifinal swims, both Kevin Cordes and Cody Miller touched the wall ahead of the rest of the field in order to secure their spot on the American Olympic team.

Out first at the wall, Cordes turned in 27.49 with Andrew Wilson, Marcus Titus, and Cody Miller hot on his heels. As he advanced forward to the 75, he began to separate himself from them as did Miller.

With 10 meters to go, Miller creeped right up on Cordes’ shoulder, but didn’t have enough to overtake him as Cordes clocked in at 59.18 to Miller’s 59.26.

Josh Prenot passed both Wilson and Titus in order to claim the third spot. Michael Andrew was fourth in a new national age group record time of 59.81.

Katie Ledecky is going to be the headline of every article related to swim trials tonight. It’s going to talk about how Ledecky went out over two-seconds under world record pace at the 100, and how she held on to finish within roughly half-a-second of her own world record.

The real story, is that Katie Ledecky is beatable. And the woman who proved that Ledecky is in fact human: Leah Smith.

Smith went out fast, although Ledecky was about a body-length and a half ahead of Smith at the first 100, Smith maintained that position for the remainder of the race. Towards the end, she even chased down Ledecky towards the wall.

Smith’s performance now makes her the fourth fastest performer of all time in the 400m freestyle, and the second fastest (only behind Ledecky) in a textile suit.

Ryan Murphy threw down a wicked 100m backstroke to put up the top time in the world this year in the first semifinal. Murphy was a 52.28 at the wall, just shy of his 52.18 personal best.

Indicative of the absolute depth that the United States has in the 100m backstroke, in the second semifinal, David Plummer bettered that time with a 52.12 in order to become the fastest swimmer this season in the event.

While the way Murphy and Plummer are swimming, Aaron Perisol’s 100m backstroke world record looks to be in jeopardy tomorrow night.

It’s not often that you say Missy Franklin and Natalie Coughlin just squeaked their way into the final, but thats exactly what happened tonight as Olivia Smoliga ran the show.

In the first semifinal Amy Bilquist came out on top with the only sub one-minute performance. Her 59.85 paved the way to give her the third seed overall.

Olivia Smoliga took absolute ownership of the second semifinal, rocketing to the wall for a 59.16 swim that puts her at the top of the list heading into tomorrow’s final. Keeping pace with Smoliga was Kathleen Baker who also posted a low 59. She was a 59.36 which gives her the other middle lane beside Smoliga tomorrow night.

Smoliga and Baker have edged their way to the front of the pack for tomorrow’s final where Franklin and Coughlin will need to be significantly faster if either Olympic gold medallist has hopes of taking home another title in the 100 back.

Anyone think know if 2fly comes before or after 2free at finals?

US national anthem sung by the audience
https://www.youtube.com/watch?v=dll-gKgtBAM

Women’s 400 free
I’ve just watched the race. Wow! 1.56.28 at the 200 😆 Maybe a little bit exaggerated. 😆 At least for now. In Rio it will hold until the end.
And Leah Smith couldn’t hope a better rabbit. But she dared. And it paid off.
What a great pair USA sends at olympic games in that event.
https://www.youtube.com/watch?v=YMGRyORNJt8