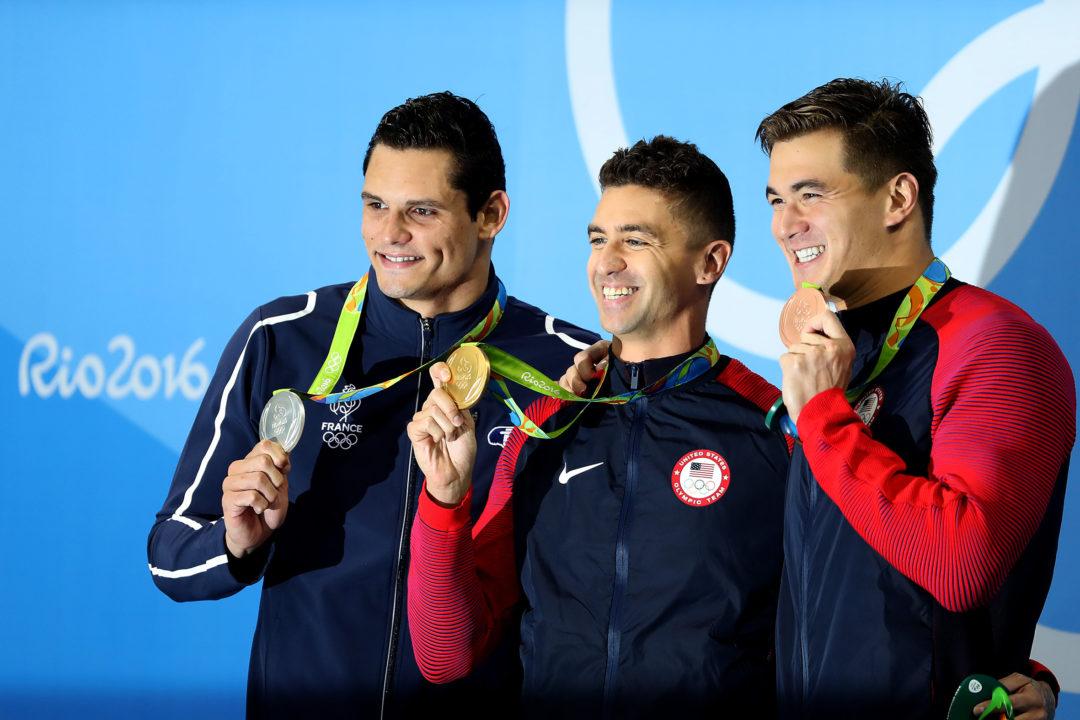 Assuming Michael Phelps isn't making a comeback down the road, this will be his last individual race ever where he will look to four-peat in this event winning gold number five of these games and 23 all time. Current photo via Simone Castrovillari

The seventh day of the Rio 2016 Olympic Games has arrived and with it means there are only four gold medals left to be earned, only six of which are in individual events. Four of those golds will be determined tonight before the women’s 50m freestyle, men’s 1500m freestyle, and both medley relays will be contested tomorrow.

Katinka Hosszu of Hungary has the potential to snag the first gold of the evening. With three gold medals so far in the competition, a fourth gold medal would tie her for the second most amount of gold medals in one edition of the Olympic Games in any sport. The achievement would be huge for Hosszu who missed out on earning any medals back in 2012. A win would also tie Hosszu for the only female swimmer to win four individual gold medals at one edition of the Olympic Games.

The much anticipated men’s 100m butterfly final will take place following the women’s 200m backstroke. Swimming Singapore is calling it “The Race That Stops the Nation.”

Assuming Michael Phelps isn’t making a comeback down the road, this will be his last individual race ever where he will look to four-peat in this event winning gold number five of these games and 23 all time. Joseph Schooling of Singapore was the fastest qualifier and both Laszlo Cseh of Hungary and Chad le Clos will be looking to spoil Phelps’ butterfly farewell.

Katie Ledecky is racing against the clock in the women’s 800m freestyle. She’s the world record holder by a long shot. She already has three golds and a silver at these games and will be looking to add to that tonight. She could also join the prestigious four-golds club that Hosszu will be looking to join.

The men’s splash-and-dash has favorite Florent Manaudou of France looking to repeat his gold medal. The Aussies and Americans are his biggest rival in this event along with Ukrain’s Andrii Govorov.

The last event of the night will be the women’s 50m freestyle semifinals.

In the final race of her career, knowing that no matter the results she would be retiring to pursue a high-end job in Atlanta, Maya DiRado of the United Stats took down Katinka Hosszu of Hungary to win the gold for the stars ‘n’ stripes.

Hosszu took the early lead with DiRado, Hilary Caldwell of Canada, and Belinda Hocking of Australia all fighting for the silver and bronze medal positions. At the 100 wall it was Hosszu first followed by DiRado and Caldwell.

Through the 150 they turned in that order as DiRado pushed out in front of Caldwell and Hocking to establish herself as the clear favorite for silver in a race that looked all but won by Hosszu.

In probably the most fitting send-off in this event for the greatest Olympic champion he tied with his two rivals, Chad le Clos and Laszlo Cseh. He didn’t tie with them for the gold medal however, he had to settle for silver.

The last time Phelps lost this race internationally was at the 2005 world Championships in Montreal 11-years-ago where he got beat by American teammate Ian Crocker. The time that Crocker beat Phelps in: 50.40.

The 50.40 textile best from Crocker is the one record that has eluded him his entire career, and finally, in his last race ever, it went down. The only thing not picturesque about the loss is the fact that it went down at the hands of Joseph Schooling who defeated Phelps for gold with a 50.39.

Not only was the textile record finally broken, but a new age of the 100m butterfly has been ushered in on the hands of Schooling.

In the most fitting sendoff for the greatest Olympian of all time in the individual event, everything fit the storyline almost too perfectly.

As expected, Katie Ledecky absolutely dominated the field in the women’s 800m freestyle to smash her own world record and win her fourth Olympic gold of these games putting her in an elite class of the best of the best swimmers in the history of our sport.

Under world record pace for the vast majority of the race, Ledecky managed to establish over a 15-meter lead on her competitors as she clocked in at 8:04.79 to take almost two seconds off her world record as she waited for over 11-seconds to see who would be standing on the podium with her later on.

As it turned out, Jazz Carlin of Great Britain and Boglarka Kapas of Hungary would be the two swimmers to touch second and third behind her. Separated by just two tenths of a second at the wall, Carlin got the better of the touch and thus the better of the two medals.

Ledecky is tied as the third  female swimmer to have won four gold medals at a single Olympics. The only swimmer who has won more than that was Kristin Otto of East Germany with six.

Sixteen-years after he touched the wall at the 2000 Sydney Olympics as a teenager to win gold in the 50m freestyle, American Anthony Ervin has done it once again. Tonight, he claimed the win in the 50m freestyle by an unbelievable one one-hundredth of a second.

The win for Ervin makes him the oldest swimmer to ever win an individual Olympic gold medal, taking the win tonight at 35-years-old.

Ervin defeated the defending Olympic champion Florent Manaudou of France by just one one-hundredth, touching in at 21.40 as Manaudou touched in at 21.41.

Third was Nathan Adrian who picked up his second individual bronze medal of these games with a time of 21.49, just out of reach of Ervin and the Olympic Gold.

Pernille Blume lowered the Danish national record for the second time today, bettering her prelims swim with a 24.28 in order to once again take the top seed, this time heading into finals.

Her time of 24.28 touched ahead of Cate Campbell of Sweden who is the favorite to win gold in this event. Campbell was a 24.32, jut four one-hundredths behind Campbell.

100m freestyle champion Simone Manuel advanced to the final as well with a sixth overall finish in 24.44.

A tired 24.69 for Sjöström. Fair play for trying, but as I said, she’d have been better served scratching it and looking to the Medley Relay. Out of both finals now – By .1 of a second on the Medley.

Live & learn. But it was always too big a schedule – That’s why I believed so strongly she’d scratch.

0
0
Reply
One of many Swimmers

This might have been the best session of swimming I’ve ever watched.

Does anyone notice?
Tom shields broke the rules in relay event when he turn.
US should be disqualified.

Watch his touch.
He should use both hands,but just one hand.