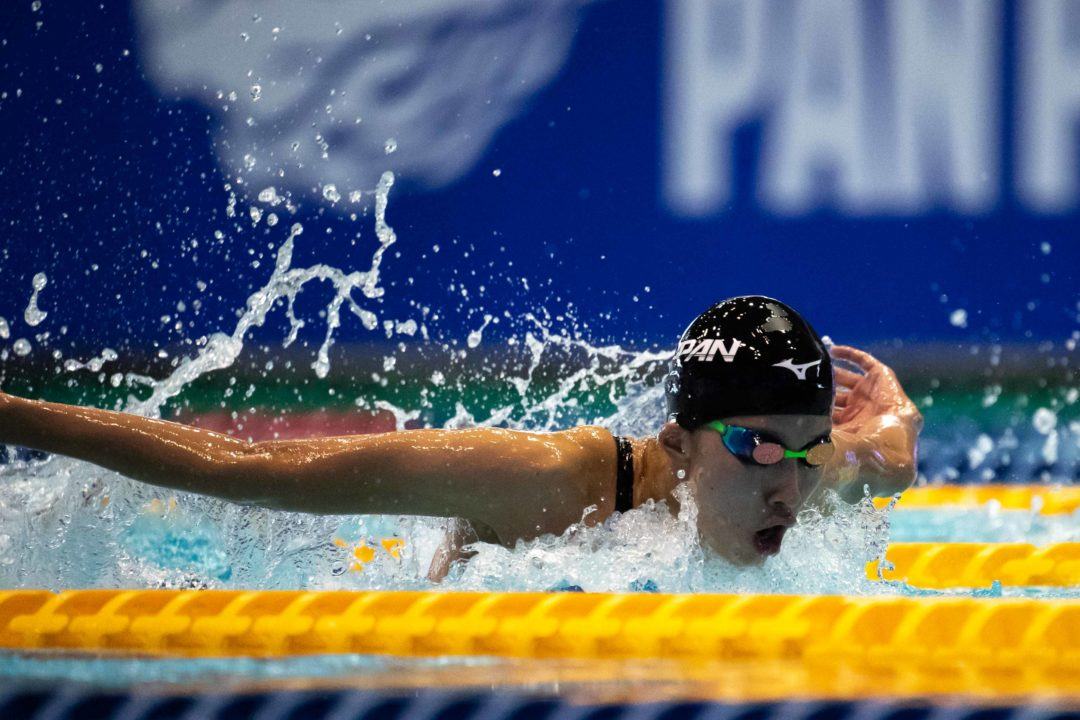 Yui Ohashi put up another impressive 400 IM performance, while Rikako Ikee tried out events like the 200m fly and 100m breast at a domestic meet this weekend. Archive photo via Mike Lewis/Ola Vista Photography

The Japanese racing train kept on rolling this weekend, as several of the nation’s big guns followed up the Kosuke Kitajima Cup from last weekend with the Tokyo Swimming Center Invitational Swim Meet in Tokyo this week. Kosuke Hagino, Daiya Seto, Rikako Ikee and Yui Ohashi were just a few of the top competitors that threw down at the Tatsumi International Swim Center.

For Olympic champion Hagino’s part, the 24-year-old produced a solid 400m IM to top the podium in the event, raking in a winning effort of 4:15.57. In the very early accumulation of LCM world rankings, that puts Bridgestone’s Hagino at the top of the list of competitors for the 2018/2019 season.

Hagino fell short of the top prize in the sprint 200m IM event, however, as ANA’s Seto soared to the lead and never looked back. Seto wound up winning the race handily in a time of 1:57.22 to Hagino’s runner-up result of 1:59.08.

For Seto, his time overtakes China’s Qin Hiayang as the #1 swimmer in the world this season. It also rivals the 1:57.13 Seto put up at the 2018 Asian Games that left him disappointingly off the podium in 4th. In that race in Jakarta, it was China’s Wang Shun who took gold in 1:56.52, while Hagino earned silver 1:56.75.

Straight off altitude camp in Flagstaff, Arizona, seasoned racer Ryosuke Irie got the job done in the men’s 200m back, clocking a time of 1:56.78 for the victory. Hagino was also a competitor in the 200m back event, earning a time of 1:58.88 for silver behind the 28-year-old.

The women’s 200m backstroke National High School Record was broken by Anna Konisha, as the Asian Games silver medalist in the 100m back broke the 21-year-old record this weekend. The teen put up a time of 2:16.70 to overtake the previous record of 2:16.95 set by Miyuki Tanka way back in 1997.

Although she fell short of the gold in the women’s 200m fly, Yui Ohashi produced a new personal best in the event, capturing the silver in a mark of 2:07.03. Charging to the wall first, however, was German swimmer Franziska Hentke, who finished in 2:06.50 to deny the Japanese swimmer the win.

Also in the race was sprinter Ikee, who raced outside her bread-and-butter sprint free/fly events to take on this 200m fly, finishing 10th in a time of 2:18.43.

Ikee wound up on the top of the podium in the 200m free, however, taking the top prize in a casual 1:57.37. The 18-year-old owns the Japanese National Record in the event with the 1:54.85 thrown down for silver at this year’s Pan Pacific Championships.

Ohashi produced another downright punishing effort in the women’s 400m IM, however, as the Asian Games champion fired off a mark of 4:33.25 to win by well over 9 seconds. Ohashi’s mark this weekend outperformed the 4:34.58 produced to take the title in Jakarta, as well as beat the 4:34.50 she registered for 4th at the 2017 FINA World Championships.

It’s a solid follow-up to the 4:32.00 she threw down last weekend at the Kosuke Kitajima Cup that positions her as the #1 swimmer in the world this season.

2.08 200 fly and 1.09 low 100 br: off-events swum in November..; Ikee is really amazing and her 200 im would be intriguing.
Ohashi (great results in this meet) and Ikee in the 200 im: what a race to watch and what a fantastic couple of Japanese competitors on World stage.

Yes, it was a typo on my part and results were down a bit to delay confirmation; 2:18.43 for Ikee.

Ok..
Usually, beyond reading the article I always check the page of results;, not in this occasion (also because they weren’t available when I tried to open the page) and paid the fee…
2.08.4 would have been astonishing (like I wrote) for Ikee because 200 fly wants a specifical training, 2.18 is far more normal.

The reporter meant probably that Ikee became 10th all-time with such a result. Not 10th in this meet that definitely wouldn’t place her in the final race of this event because as we all know it has only 8 swimmers. 😀

I thought of that at First as well but then remembered that in my Home Country swimming Finals (both a and b) featured 10 People each at some meets instead of the usual 8. so i assumed thats the case here as well 🙂
Anywho, 2.18 is still decent