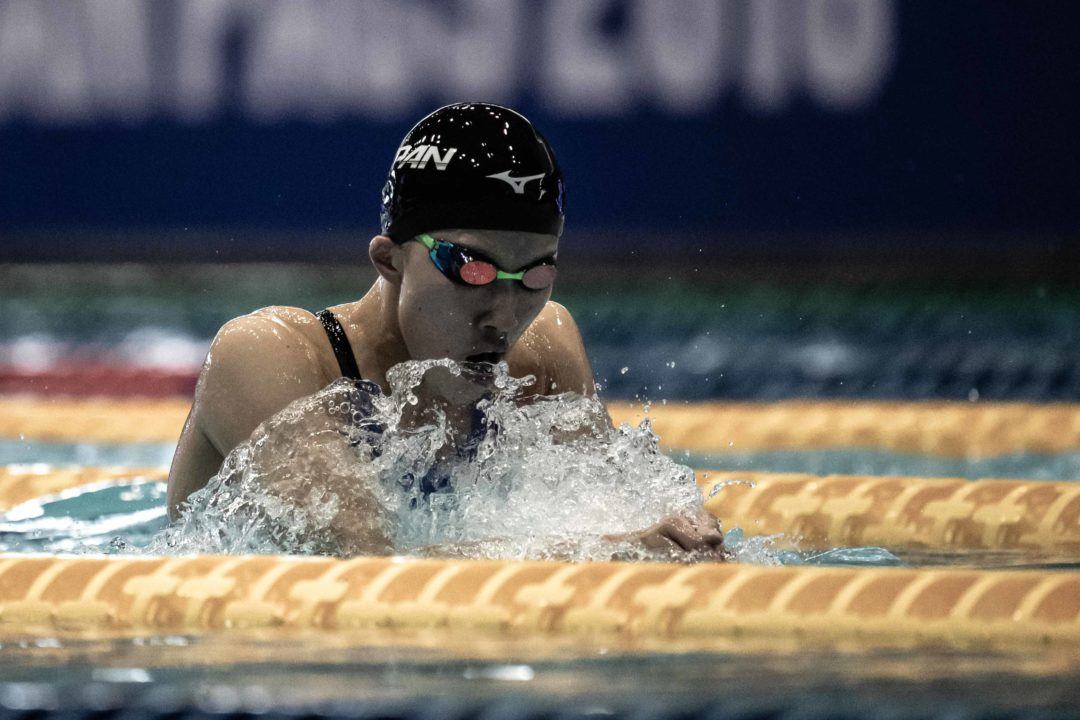 Yui Ohashi fired off a faster 400 IM time tonight in Tokyo than what it took her to win gold at this year's Pan Pacific Championships. Archive photo via Mike Lewis/Ola Vista Photography

Named for the legendary Japanese Olympic breaststroker Kosuke Kitajima, the Kosuke Kitajima Cup got underway today in Tokyo, Japan. An open competition, national and international athletes have descended on the famous Tatsumi International Swim Center for 2 days of action at the site of the 2018 Pan Pacific Championships.

Note that this is technically the 2019 Kitajima Cup, even thought it is taking place in 2018. The competition typically takes place in January of the year, as the 2018 version did, but, due to Worlds qualifying meets and other conflicts, the Cup is being held this weekend instead.

Rikako Ikee was in the pool for 2 events on night 1 of the Kitajima Cup, one of them representing a complete ‘off’ event for the 18-year-old. Known for her bread-and-butter events of the 50m and 100m free and fly, Ikee tried the 800m freestyle on for size in Tokyo this evening.

Finishing 10th in a time of 9:14.54, Ikee was quoted afterwards as saying, “It was super hard, I almost gave up. But, it was a good experience.”

Back to her signature speed, Ikee fired off a stellar 57.06 100m butterfly to take the title easily in Tokyo. That moves Ikee to the head of the table in terms of the world rankings very early in this LCM season, bumping An Sehyeon’s (Korea) former #1 time of 57.96 down one slot.

For perspective on her time this evening, Ikee wrapped up the 2017/18 long course season with a personal best and new Japanese National Record of 56.08 en route to the gold medal at this year’s Pan Pacific Championships.

Another mover and shaker tonight was Pan Pacs champion Yui Ohashi, who made a major dent in the women’s 400m IM meet record. Stopping the clock at a swift 4:32.00, Ohashi’s winning time tonight outperformed the 4:33.77 it took her to top the podium at this year’s Pan Pacific Championships.

Additionally, Ohashi’s 4:32.00 outing would have earned her the silver medal at the 2017 FINA World Championships, obliterating the 4:34.50 she registered for 4th at that meet in Budapest. Ohashi now sits as the #1 swimmer in the world in the LCM 400 IM.

Olympic champion Kosuke Hagino was in the pool as well, taking the men’s 400m IM in a winning time of 4:15.70.