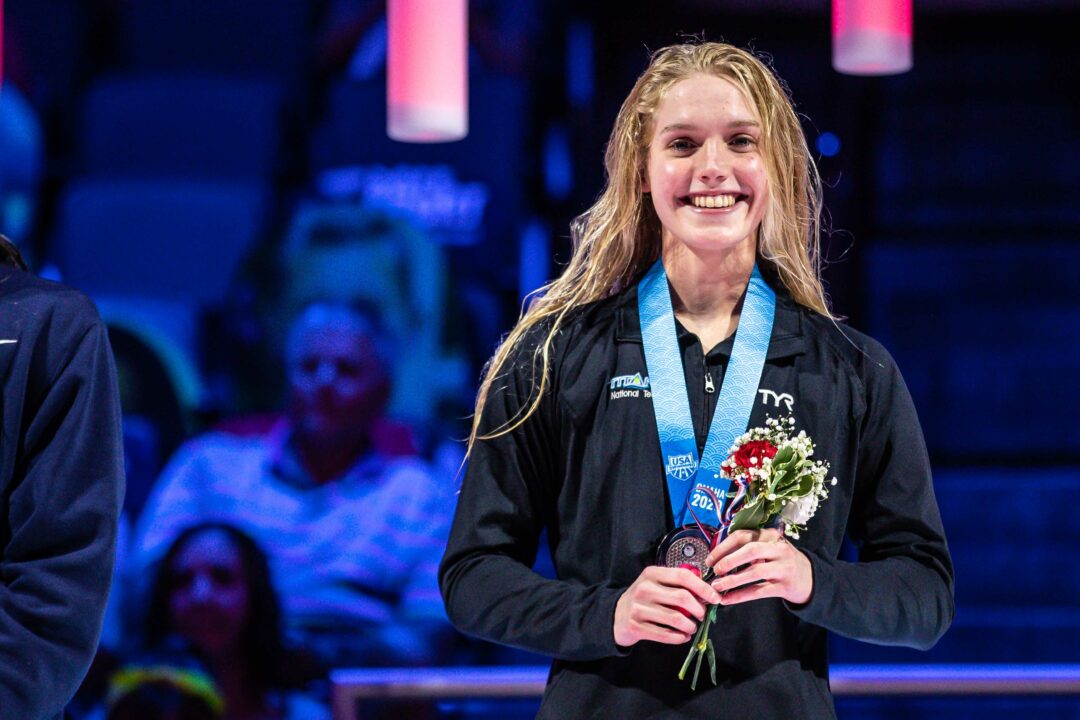 Claire Curzan has already been a 56.89 this year in the 100 LCM butterfly going 2 for 2 in wins at the Pro Swim Series stops. Current photo via Jack Spitser/Spitser Photography

Last year at Wave II Olympic Trials, teenagers Torri Huske and Claire Curzan went 1-2 to secure their spots on the Olympic team in the 100 butterfly. Since then though, third place finisher Kate Douglass has gone onto set an American Record in the 100 yards butterfly, and Kelsi Dahlia broke her own American Record and set a new World Record in the short course meters (SCM) version of the race.

Curzan has been consistently on fire lately. Curzan broke the yards 100 butterfly American Record in February swimming a 49.24 (Douglass has since broken that record swimming a 49.04 at NCAAs). Curzan has since gone 2 for 2 in wins at the Pro Swim Series meets in the 100 LCM butterfly. She won the event in a 56.89 at Westmont at the beginning of March. She also followed that swim up winning the event at San Antonio in a 57.02 at the end of March.

Douglass went three for three in SCY American Records at NCAAs, including breaking the American Record in the 100 fly with a 49.04. She was third at trials last year in the event swimming a 56.56. Since she has been busy with the NCAA season she hasn’t made as many LCM appearances as Curzan. She did however swim a 1:00.73 at a UVA time trial on April 8. She had no one to race in that heat though as she was the lonely swimmer in lane five.

Huske finished just off the podium at the Olympics last year swimming a 55.73. A key difference here between Huske and Curzan is that Curzan, a high school senior, is still at home training with her club team. Huske is now at Stanford in a new environment. This will be her first time with a long course taper at Stanford, and she will also have to deal with a double taper than Curzan will not (as will Douglass).

The good news though is that she had a solid showing with her taper at NCAAs, going personal bests in all three of her individual events. She swam a 58.29 on April 16th.

The big veteran in this event is Dahlia. She was fourth last year at trials in a 56.80. Although she missed out on the Olympic team, Dahlia was consistently winning the 100 SCM fly during the ISL season before breaking the World Record in the finals swimming a 54.59. She continued her momentum into the Pro Swim Series meets finishing second behind Curzan in both Westmont and San Antonio. She has already swam a 57.53 this season.

Kelly Pash was sixth in the event at last year’s Trials in a 58.27 and hovered around that time at San Antonio Pro Swim as she went a 58.87 there. Although she did not compete in the event at 2022 NCAAs, her endurance from swimming the 200 free, IM, and fly should help in the transition to long course here.

Beata Nelson was 14th in semifinals at last year’s Trials but has already been faster this year than she was then. She was third at Pro Swim in Westmont swimming to a third place finish in a 58.24.

Lucy Bell, a high school senior, swam the event at Wave II Trials last year going a 1:00.42. She has already been much faster this year, going a best time of 58.69 at Pro Series in Westmont. That time earned her a fourth place finish. She followed that swim up by swimming a best time in the yards version of the event at the end of March.

Darkhorse: Alex Shackell– She has been consistently dropping in this event over the last year going from a 1:01.26 at last year’s spring Sectionals to a 58.88 at this year’s Sectionals. If she drops any more time like the trend she has been on, she has a good chance to make the A final here.

Both Curzan and Huske swam the 50 SCM butterfly at Short Course Worlds in December 2021. Curzan was third in an American Record setting time of 24.55 and Huske was fourth in 24.88. Dahlia holds the LCM 50 butterfly American Record as she has gone a 25.48 three separate times in her career. Gretchen Walsh could enter the mix here.

Both her and Huske are capable of destroying the NR.

Huske’s long course pr is 55.6. I know a lot of girls was dropping 55 last year, but it’s still not a time that’s easy to touch. I don’t think both Curzan and Douglass will be close to it. Unless you believe Huske is very off this year, it’s weird not to pick her to make the team.

I usually agree with the swimswam logic, but this time it’s kind of off.
Building mountains around Douglass’ SCY American record while disregarding Dahlia’s SCM World Record…
Dahlia has the better PB, the greater experience and the superior record(SCM WR has to be a better indicator for LCM than SCY AR), plus Douglass has a double taper.

And Huske… She’s light years ahead of them all! I’m having Curzan first just because of the double taper thing

These elite swimmers can handle double tapers. USA Swimming has a pretty good track record of going from Trials to the Olympic Games, and that is a similar turnaround time to NCAAs to WC Trials.

And it will be a triple taper in 3 months for the best US college swimmers! Good luck to them!
By the way there’s a big difference between olympic trials/olympics and NCAAs/world trials. In the first case it’s LCM for both meets. This time college swimmers must make the transition from SCY to LCM and very quickly.

Agreed but given how low of a priority the Cal men placed on their conference meet, I think the elite coaches planned accordingly.

From what I noticed Huske seems to be better at LCM just based on the past few years. With that said, my top 2 right now in the 50 would be Dhalia and curzan and in the 100 huske and curzan.

It’s hard to know if Huske is better at SCY or LCM because I don’t think she did any fully tapered SCY meets from 2019-2021 due to having double Olympic years. She’s an incredible swimmer in both courses.

Don’t think Regan will swim this. I think Hinds will be better than 8th.

I sure hope so. Gotta get past Shackell

Three of the top eight Plus Smith to train together at Stanford next year – just look over to the next lane to see your competitors, that will be intense!

Throw Hook in as well, would love to watch those IM sets.