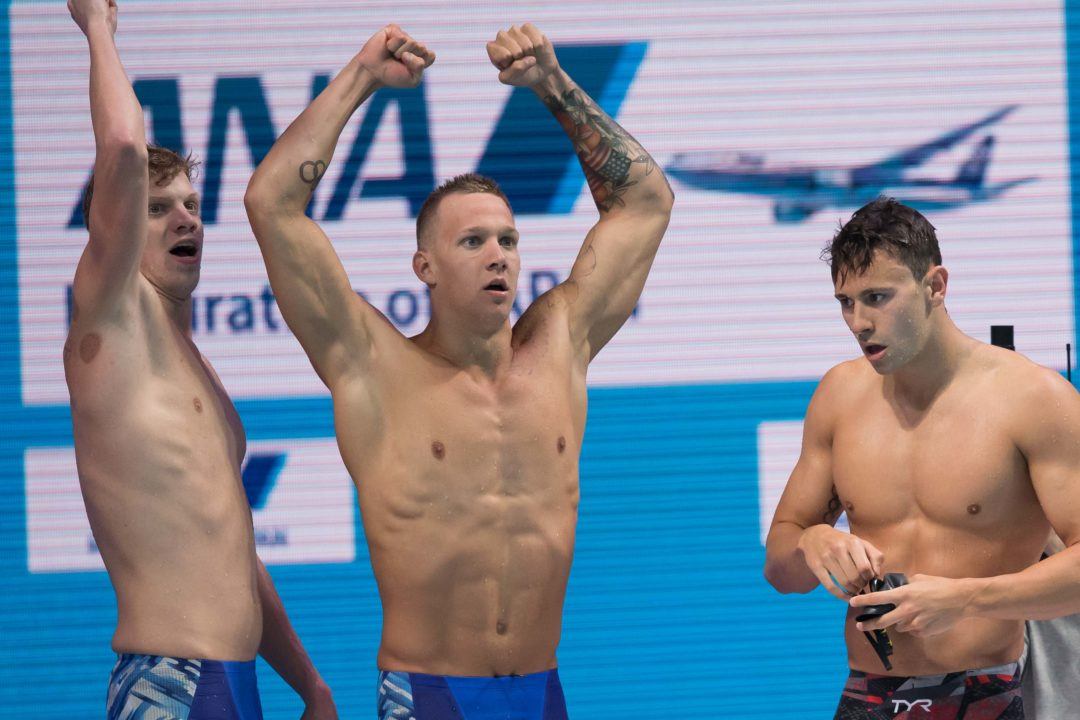 The American men won the gold medal in the 4×100 meter freestyle on Sunday night, snapping a drought at World Championships that dated back to their last win in 2009. Caeleb Dressel broke the American Record in the 100m free with his 47.26 leadoff, getting the USA out to a significant lead. He was followed by Townley Haas (47.46) and Blake Pieroni (48.09), before Nathan Adrian stepped up to the block for the anchor.

Meanwhile, in the lane next door, Brazil had the momentum. After a 48.30 leadoff from Gabriel Santos, the Brazilians made up for the one-second deficit on the next two legs, outsplitting the Americans by .69 with Marcelo Chierighini (46.85) and Cesar Cielo (48.01).

Caeleb Dressel. His spot in the limelight might begin at this meet. He already blasted an American record in the 50 fly earlier in the session, and he then led off this relay with a 47.26, taking down David Walters’ American record in that, too. The Americans were out to a sizable lead thanks to Dressel, with Brazil on their tails the whole time. Things got dicey between Townley Haas‘s and Blake Pieroni‘s legs, and the pressure was definitely on for Nathan Adrian.

Diving in against Bruno Fratus, Adrian had a very small lead, and his anchor duty skills would be tested once again. Fratus kept it close, but Adrian muscled it out to the wall to give Team USA the gold at 3:10.06. Brazil settled for 2nd at 3:10.34, though Marcelo Chierighini had a 46.85 split.

Hungary came out of nowhere for the bronze– they were not medal contenders on paper before this meet started. Dominik Kozma broke his Hungarian record from prelims with a 48.26, and the heroic split from Richard Bohus (47.21) really made the difference for them.