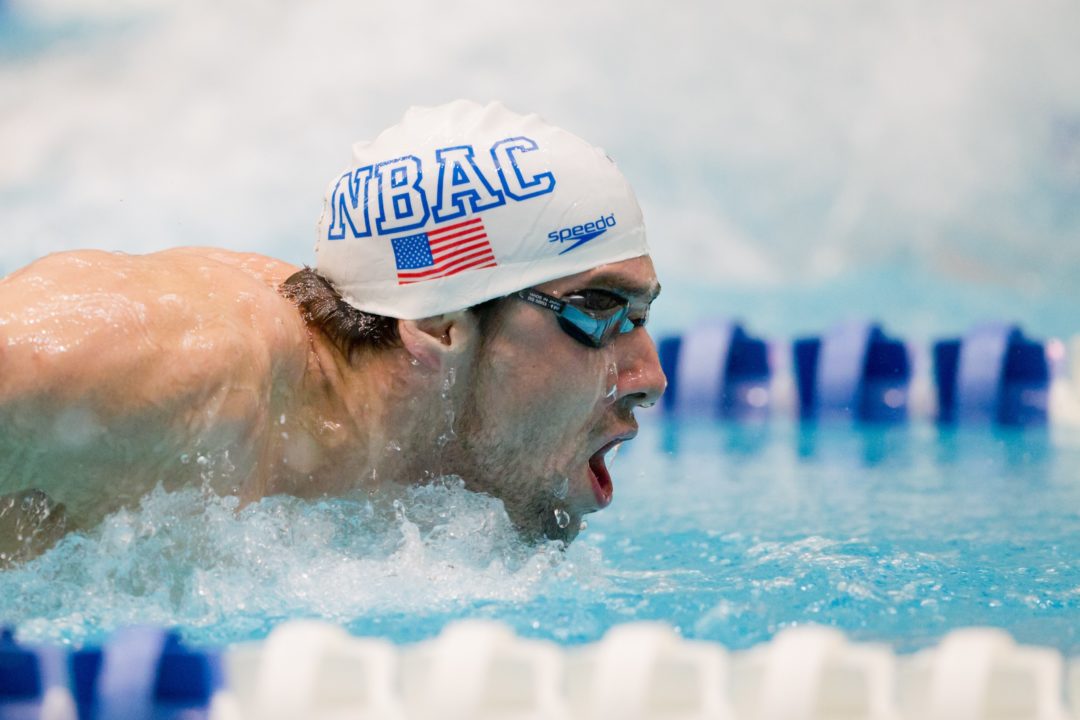 Relive Phelps winning his first world title at the 2001 Championships in Fukuoka, breaking the 200 fly world record for the second time in four months. Archive photo via Tim Binning/TheSwimPictures.com

After making his Olympic debut at the 2000 Games in Sydney, placing fifth in the 200 butterfly a few months after his 15th birthday, American phenom Michael Phelps became the youngest-ever male to set a world record in the event at the 2001 World Championship Trials in Austin, Texas.

Phelps, who was 15 years, nine months at the time, finished in a time of 1:54.92, knocking off the 1:55.18 mark established by reigning Olympic champ Tom Malchow the year prior. Previously, the youngest male to set a world record was Australian Ian Thorpe, who broke the 400 free mark at 16 years, 10 months in 1999.

This led Phelps into his Worlds debut at the 2001 Championships in Fukuoka, Japan, where he would face all four of the men who finished ahead of him in Sydney.

After both Malchow and Frenchman Franck Esposito had broken the Championship Record in the semi-finals, falling just 0.11 shy of Phelps’ world record in 1:55.03, Phelps did what he would go on to do too many times to count over the course of his illustrious career: deliver with the pressure on.

Now, FINA has given us the quarantine gift we all needed, uploading the full race video to its YouTube channel. Watch the race, courtesy of FINA, below:

This race ended up being the second of eight times Phelps would lower the long course 200 fly world record. He brought it down to 1:51.51 at the 2009 World Championships, a mark that stood for 10 years and three days before Hungarian Kristof Milak took over possession of the record at last summer’s World Championships in a time of 1:50.73.

Ervin with the celebration in the stands 🙂

3 American citizens and 6 Olympic past-and-future medalists in that race. Quite remarkable

I think it would be another 10+ years before Phelps would NOT win a 200 fly.

Phelps lost to Malchow a year later at Pan Pacs

Phelps is actually not the youngest male to break an individual world record. They honor belongs to Australian Stephen Holland who was 15 years and 2 months old when he broke Mike Burton’s 1500 freestyle word record in 1973.

It’s interesting how dolphin underwaters became the norm. Michael Phelps and Natalie Coughlin really pushed it. This wasn’t really something taught at age group levels then, or at least not a norm. I was shocked when I went to my highschool alumni meet when skinny freshmen were able to kick out fairly far.

What I find strange is that in the late 80s and early 90s there were high level swimmers who would do almost the first 50 underwater, but then just come up past the flags for the rest of the race. Im guessing this was due to oxygen deprivation wonder if the 15 meter rule (I think it became a think in 2000?) unintentionally forced the development of… Read more »

Genuine question… what is the point of the second video? Don’t really understand the style of it whatsoever, like it’s just the article spaced out into 1-minute long video form

Different people like to process news in different ways. Coleman creates those videos mostly for social media, but it doesn’t really hurt anything to have it in the article, so sometimes he sticks them at the end.

Omfg that underwater shot of Frank Esposito at 1:57, the dude is kicking with one leg like an age grouper lol. Also side breathing, that’s a relic from the past, it’s amazing how much Phelps changed butterfly.

Malchow also kicking every other!

Does anyone know where to find the race video from Austin? I’ve searched everywhere but can’t seem to find it