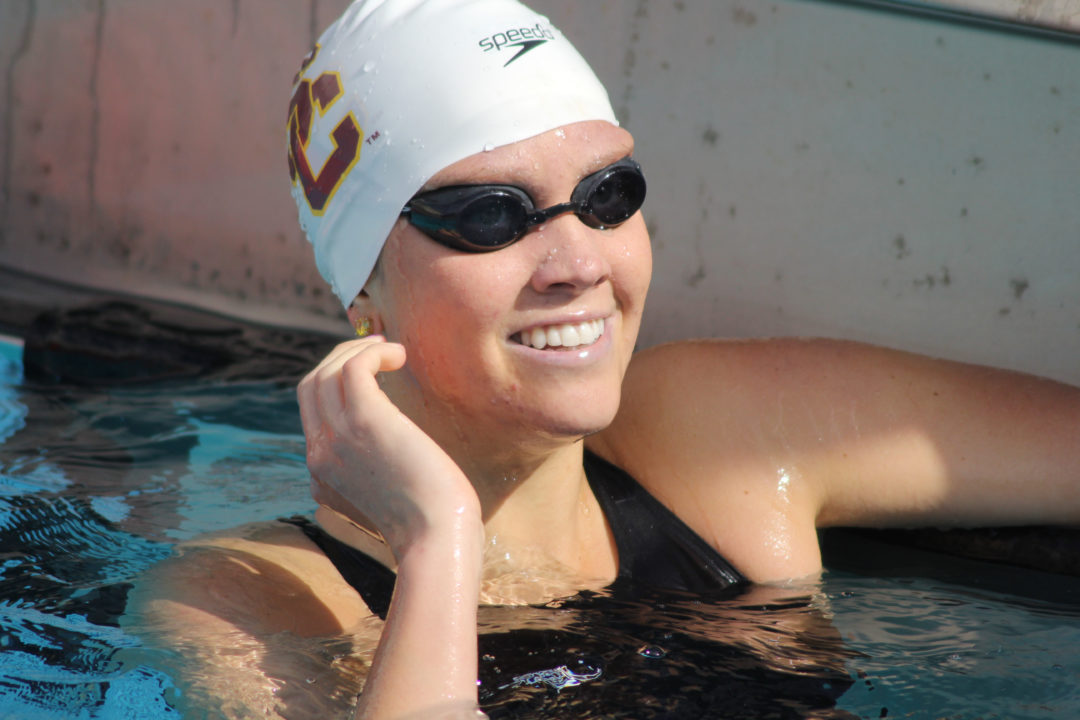 Former Texas and University of Southern California swimmer Ashley Brewer made her ESPN debut as a show host on the newly-launched short-form mobile streaming platform Quibi this week, marking a new high after years of hard work in a career she never expected to have.

Growing up, Brewer’s life plan never went much beyond being a top-level swimmer. As a senior sociology major swimming under Dave Salo, she had never had an internship or work experience to fill out her résumé.

“I think every swimmer – at least for me and my teammates I was around – you kind of have like an identity crisis somewhere in your career and it’s when that reality hits that, ‘okay, maybe this isn’t everything,'” Brewer said. With help from her former-news anchor mother, she set out to find work.

After making some calls, Brewer landed an internship in the sports department at ABC7 Los Angeles, then leveraged that into a six-month job while still in school.

“I always told them I was willing to cut classes and willing to miss everything just to work because I felt so behind,” Brewer told SwimSwam. “And a lot of that was just from being a swimmer. When you’re swimming two times a day, every day, you’ve no time for anything. I could barely keep my head afloat just being a college athlete, but trying to mix in a job or an internship was just near impossible.”

By the time swimming – and college – ended in 2014, she had put together a reel of work and got her next gig as a weekend sports anchor and weekday reporter at an ABC affiliate in Tucson.

“And to be honest, when I was starting out, I had no idea what I was doing,” Brewer said. “I was just kind of figuring it out every day. I didn’t go to journalism school, I was a sociology major, so I was really, really kind of clueless and I just watched people on TV. And I think I had some natural talent – a lot of that being from my mom, who was in the business – so I kind of had a good feel for TV.”

She improved “significantly” over her two-year stint in Tucson, she said.

“I think a lot of that was just kind of putting my head down, and like swimming, just sacrificing everything to really try to move up in the business, and the job my whole life,” Brewer said. Though her goal was to be in LA again by the time she was 30, at just 24 years old, Brewer found herself back in Southern California as a weekend sports anchor.

“I think I was the youngest anchor at the time, maybe ever in LA,” Brewer added.

Three-and-a-half years and countless major events (including “The Bachelor Winter Games”) later, she made the move to Bristol, Conn. to be one of three hosts for the “The Replay” on Quibi. (Brewer will also host studio shows and report on live sports when they return.) The show, which also features ESPN’s Nabil Kareem and Sebastian Salazar, is an under-10-minute rundown of the prior night’s sports highlights.

“At first I wasn’t sure about it. I don’t think anyone, even now, is still totally sure what Quibi will become,” Brewer said. “I do believe in it now that I’ve been a part of it and that I’ve gotten to work on it. We’ve done a ton of trial shows, and just being around the team, I can totally sense that this is something that I believe the world needs right now – even without the pandemic that we’re in.”

Through it all, Brewer credits the mentality she learned as an elite athlete for her success.

“When you’re swimming, you’re face-down in the water and it doesn’t really matter what anyone else thinks or what anyone else says. It’s just you and your thoughts in a pool. And that’s kind of what I’ve taken into TV,” she said. “It’s just me here, I’m going to just do the best I can, put all the focus and energy I can into what I’m doing here and see how far it takes me. And honestly, it’s taken me pretty far. It’s been incredible. It’s not at all what I dreamed would happen.”

The streaming platform also has an episode of a show about Regan Smith! This is so exciting