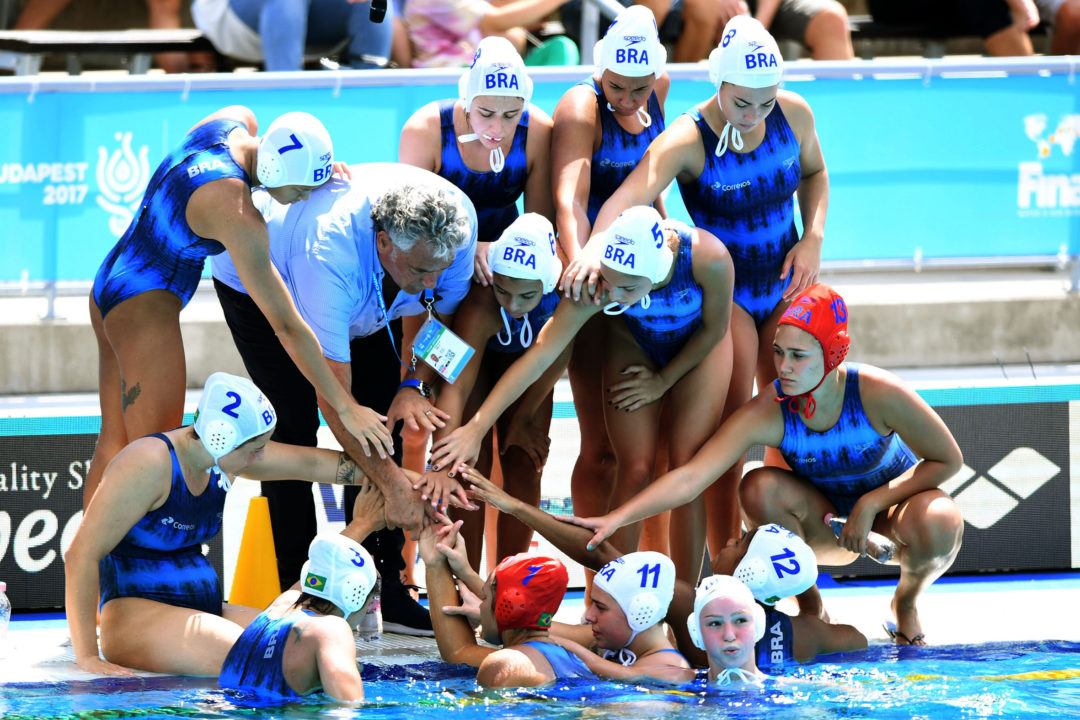 Brazil suffered a loss to China on Day One of the women's water polo group play in Budapest. Current photo via Simone Castrovillari

The FINA World Championships water polo group play got underway at the Alfred Hajos Pool in Budapest on Sunday, with eight women’s matches kicking things off.

The 2016 Olympic silver medalist team, Italy, proved too much for Canada, while China took care of Brazil. Strong second halves helped both Italy and China in their first victories of the tournament.

Canada’s Emma Wright opened the score and the Canadians led 2-1 after the first period, but Italy scored two unanswered goals in the second period, and three in the third, before adding four more in the final period to Canada’s two. Italy came alive in the second half of the match, while Canada couldn’t seem to hold it together. Canada’s head coach, Haris Pavlidis, expressed his frustration after the match, “I’m disappointed. We had difficulties in the second half of the game. They scored some goals that we could have avoided and that’s why I’m disappointed. We shouldn’t have received this kind of goals. We gave them an easy opportunity to win because of our mistakes. It’s a series, we’ll play better in the second game.”

In addition to Wright, Monika Eggens (2) and Kelly McKee (1) scored for Canada. Christine Robinson was ejected for three fouls, and coach Pavlidis received a yellow card.

Although they got off to a tentative start (“The first game is always a little bit nervous and this game was also. In the first period we committed some mistakes, but after that we changed tactics and we took the result,” said head coach DaLi Gong after the match), the Chinese women, led by led by Cong Zhang’s hat trick, prevailed over Brazil. China rallied from a 0-2 deficit and scored six unanswered goals from the end of the first period to the end of the second period. They ended the match with a four-goal streak in the fourth period.

Both Spain and the United States were dominant over their respective Group B adversaries on Sunday.

Spain, the 2013 world champion, controlled all four quarters of its match against New Zealand. A hat trick from Paula Leiton, and Spain converting five successive 6-on-5 power plays at the end of the fourth, were some of the highlights of Spain’s win.

Despite the loss, New Zealand’s head coach Angie Winstanley-Smith remained upbeat, “I feel good. We defended very well. If we can make use of our opportunities better then we can become competitive. It’s a good adventure for us. The girls are playing really well. That’s all that I can ask for.”

In an incredibly lopsided match, defending world champion USA downed South Africa 24-2. The Americans allowed very few openings, scoring a rash of unanswered goals in three of the four periods. Jamie Neushul led with 6 goals, while Melissa Seidemann scored 5 times for Team USA. South Africa managed two goals in the second period, but for the most part, goalkeepers Gabby Stone and Amanda Longan went largely untested. It remains to be seen what the absence of Ashleigh Johnson, who had the best save percentage at the Rio Olympics, will mean for the USA in this tournament.

South African player Marcelle Manson said after the match, “We are all amateur players, so it’s a great honour for us playing against these amazing players. Our team is very young; that’s why we are satisfied with our game. We are happy with the two goals that we scored because we appreciate all the small results.”

Host team Hungary put on a display of strength in front of the home crowd, handily beating Japan to open their tournament, while Netherlands dominated France.

The Dutch team dominated from the outset, scoring seven unanswered goals in the first period and five in the second. Lieke Klaassen put four in the goal, while Dagmar Genee, Maud Megens, and Catharina van der Sloot all had hat tricks. There wasn’t much France could do against the strong Dutch squad, but they managed to put two away, one in the third period and one with 1:06 left in the game. Netherlands could prove to be a formidable competitor in this tournament.

After the match, Klaassen of Netherlands said, “This result was absolutely what we expected. It was an easy game to play, but we actually should have scored many more goals. Last week we also played them in Utrecht and we won that match 18-2. If you look back to the first and second quarter, where the score was already 12-0, it should have been much more in the rest of the game. We really missed some great chances, we often hit the crossbar.” Geraldine Mahieu of France, meanwhile, was pleased with the goal she scored, saying, “I am happy to score a goal against such a great team like the Netherlands; we appreciate every tiny success. It is very hard to play matches like this when we concede so many goals. We play very emotional water polo.”

In front of 6000 enthusiastic fans, hometown-favorite Hungary took care of Japan in a scoring bonanza. The home crowd roared as Barbara Bujke and Dorottya Szilagyi each scored two to put Hungary up 4-0 in the first five minutes. Japan answered with a goal from Minori Yamamoto. The second period was even more exciting, with 11 goals in all, including three more from Bujke. The second half saw a lot of scoring from both teams, with Japan winning the final period, 5-3.

Hungary’s head coach Attila Bíro said, “This game was like a Brazilian football game — we scored, but we got a lot of goals. We should improve our defense for the next game. But, honestly, I can be satisfied because we won our first game and it is really important in the beginning of an international event.” Japan’s Yamamoto said, “It was a very tough game physically, because we play rarely against the strongest teams of the world. Personally, it was an advantage for me that I’m a little bit stronger than my teammates, therefore I could score four goals. I’m very happy for that, because I could help my team.”

The most competitive match of the day came out of Group D, where Russia narrowly beat Greece 9-7. Australia took care of Kazakhstan in a lopsided contest.

Despite Alexandra Zharkimbayeva’s strong performance in goal (eight saves), Kazakhstan was no match for the Australian team. Captain Rowie Webster had five goals to lead the Australian scoring machine. Kazakhstan missed an opportunity to score during a 6-on-4 power play late in the game, and Australia added four unanswered goals in the final period, making the final margin 12 points.

Andrey Sazykin, head coach of Kazakhstan, said, “We could not cope with the pressing of the Australian team. We had chances, but we didn’t take our opportunities. Our main goal in this championship is to qualify for the best 12 from the preliminaries, however, our group is really strong.”

Russia’s Elvina Karimova and Anastasia Simanovich each scored three goals to help defeat 2011 world champion Greece in an exciting back-and-forth match. Russia went up 4-1 before the Greeks brought it back to 4-3. Greece outscored Russia 3-2 in the third period, but couldn’t quite get to parity and headed into the final quarter trailing 7-8. Russia scored the lone goal of the fourth period to seal their victory.

Greece’s Eleni Xenaki said, “The first game of a championship is always hard and we had a bad game today, especially on offence, but we had problems on defence as well. Tthey scored four goals from centre. We have to stop this next time. We have to fix our problems and we have to look forward to our next games.”