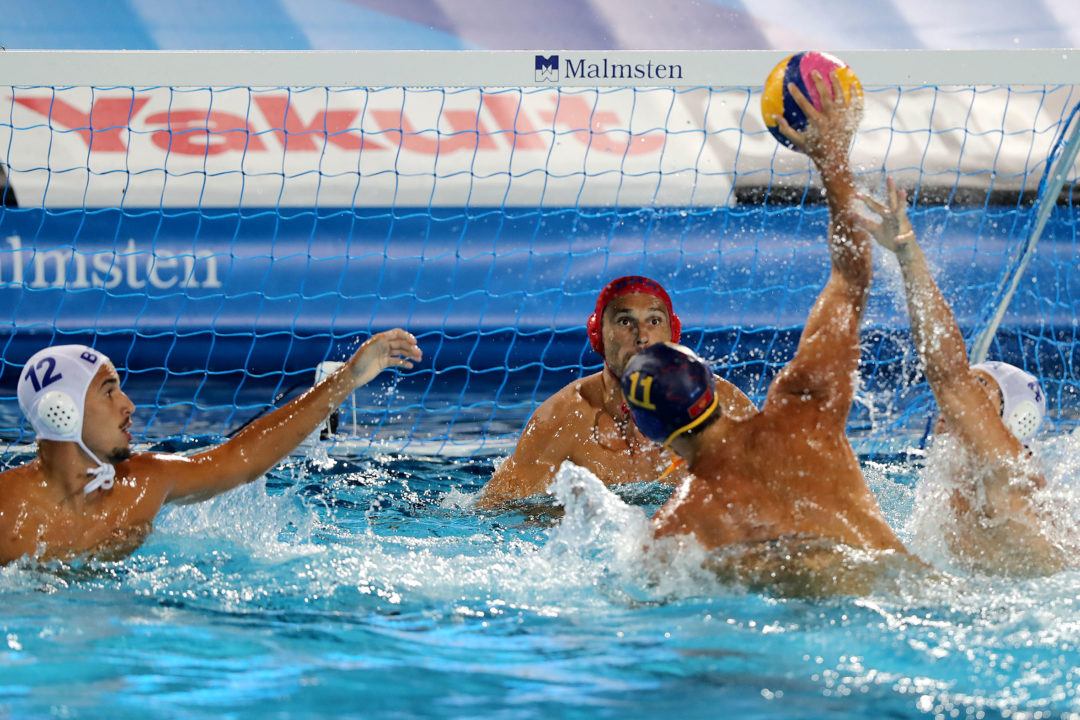 Kazakhstan won a back-and-forth match, edging Canada at the end by one point. Montenegro took over the group lead with their win over Brazil.

It was a tight match with a lot of back and forth, but Kazakhstan broke through in the final period to get the win over Canada. The Canadians had an opportunity late in the game with a steal at 1:38, but they were unable to equalize and Kazakhstan took home the win. Nemanja Knezevic, Kazakhstan’s head coach, said, “It’s a big win for the team. Our first game was with Brazil and their goalkeeper was really great so they managed to defeat us. Today we won and it’s very important. We have to win against Montenegro too in order to get to the final eight. Today was a great game. I would like to congratulate my team.”

After their tentative start against Canada, the Montenegro squad had a strong showing against Brazil. They dominated the first period, then built their lead and headed into the halftime break with confidence. Aleksandar Radovic of Montenegro said, “After the last game’s stumble against Canada we practiced with a strong defense and calm attacks. Brazil has a great, experienced keeper, so we had to take away his confidence. We did and we defended extremely well.”

The closest matches of the day took place in Group B, where Hungary and Italy fought to a 9-9 draw, and Australia held off France, 11-10, after having led by three goals.

Hungary, playing in front of a full house, battled Italy for four quarters in a match that they hoped would lead to their entry into the quarterfinals. Up by two goals in the third quarter, they saw their lead slip away as Italy scored four in a row. The home team was able to come back and secure a draw, though, leading Marton Vamos to say, “We can be satisfied after we saved this game. We wanted to win; we are better than this Italian team. Unfortunately the first place of the group is out of our hands now. We are waiting for the final score of the Australia-Italy match. We have to regenerate; we are preparing for our next tasks.” Hungarian goalkeeper Viktor Nagy said, “It was a crazy game, we anticipated this, although I didn’t think that the officiating would be this way. I’m really happy that we had strength, we faced great pressure and this means a lot. We cannot think about how annoyed we are; this doesn’t build anything. When we step out of the Hajós complex, we have to forget the bad stuff and concentrate on the good ones.”

In a very physical match that saw 26 exclusions, Australia prevailed over France by one goal. They led 3-1, then 4-2, but France scored three in a row to head into the second period up by a goal. Australia went up 6-5, but France equalized at the end of the second period and the score stood at 6-6 at the half. Australia went up 10-7 but France never gave up, scoring two more times before the Australians went up by another goal to lead 11-9. France put one last goal in at 0:12 but Australia took the ball upfield and held on for the win. Australia’s head coach Elvis Fatovic said, “You could see high anxiety on both side. There were ups and downs for both teams. We made some naive mistakes in the last quarter; without those we could have finished this game much earlier, but that’s quite a good lesson and experience for us, because most of our players had never played in a major tournament before.”

Greece continued its winning ways with a romp of South Africa, while world champion Serbia took down Spain to remain undefeated in group play.

From the outset, Greece was in control of the match. They scored five unanswered goals in the first period and led 8-2 at the half. The Greeks had two more 5-0 quarters, shutting down the South Africans in the second half. Captain Ioannis Fountoulis netted six goals himself, while Christodoulos Kolomvos and Alexandros Gounas both had hat tricks. South Africa’s Etienne Le Roux said, “Greece was more skilled than us. But it was a good game. Spain is going to be a hard match up for us (Friday) as it is a strong team.”

Serbia got off to a 3-1 lead after the first quarter, and extended it to 5-1 by the long break. The second half was much tighter, but Serbia remained in control to secure its second win in group play. Spain’s head coach David Martin said, “At the moment, the reality is that Serbia is the best team of the championship. The Spanish team is still young, so we have to work really hard to fill the distance between them and us in the next years. The next match must go well for us if we want to pass to the next round. But everything depends on how strong mentally the team is going to be.”

Croatia came back from a three-goal deficit to defeat Russia, while Japan stunned USA.

Russia opened the match with a strong opening quarter, leading 2-0 then 3-1. Croatia, down 6-3 in the second, put one in the net with :10 left in the half. The Croatians came back after the long break and scored three to take the lead, before Russian captain Sergey Lisunov equalized for 7-7. Sandro Sukno scored to put Croatia up 8-7 at the end of the third quarter. Russia narrowed the margin to one goal in the fourth but Croatia put it away and wound up with a 10-8 win.

Russia’s Dimitri Kholod said, “It was a tough game. Croatia is the second best team in the world, so, even though we were well prepared, it was tough. We somehow slowed down in the third period. I think that we aren’t experienced enough for this kind of competition, but at least we gave our best.”

USA began with the upper hand, leading 2-1 and 4-3. Japan then scored three unanswered goals to make it 6-4 in their favor. The Americans narrowed the gap to 6-5, then trailed 8-6 and 10-7 at the top of the fourth, but Japan proved too much and scored the next five goals in a row, making the final score 15-7. Japan’s head coach Yoji Omoto said, “I’m really happy with the win. The USA team is our role model, because we play against them and the Australians a lot in Asia. This was our first win against them and we are really happy about it. The key to win was that we altered our tactics and made life hard for them with our zones.”