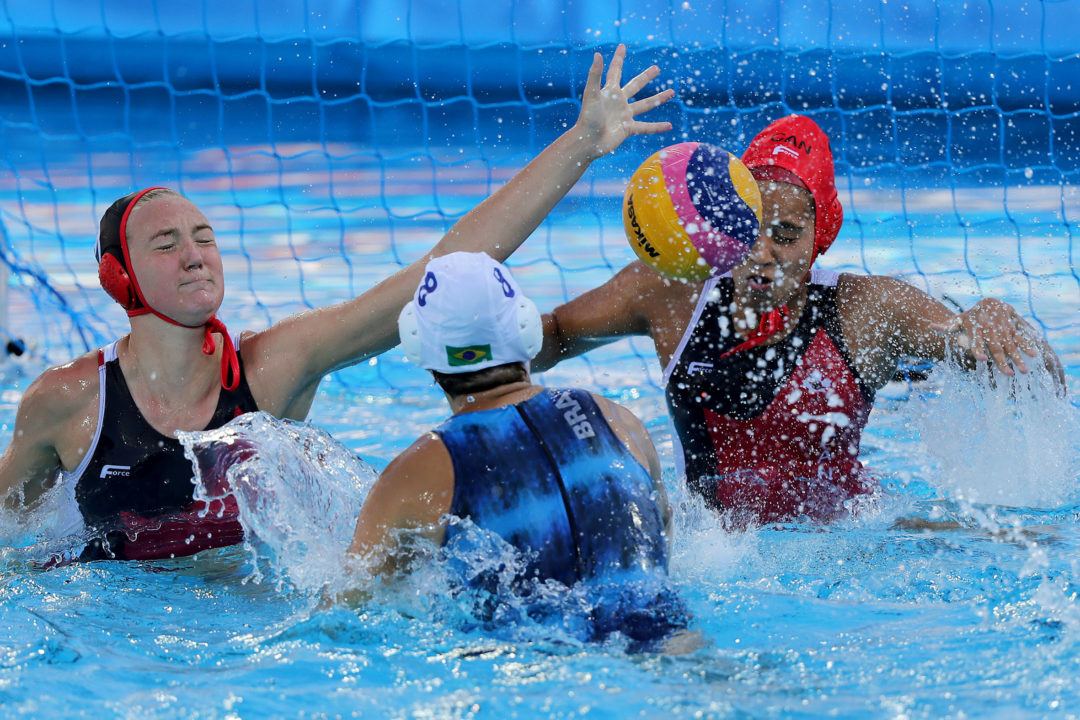 The final day of group play was an exciting one, as host nation Hungary advanced to join group winners USA, Greece, and Italy with a stunning win over Netherlands in front of a sell-out crowd. The group winners have a bye in the next round while the other 12 teams will either play to determine who advances, or will play off for 13-16 classifications.

Italy wrapped up its group play with a third rout, while Canada secured second place in the group with an easy win over Brazil.

China scored first, but once Italy came back they charged ahead and never let up. China won the final period, but by then Italy had secured the victory and thus the group win. Head coach Fabio Conti of Italy said, “It’s out of our hands who we play next, until that we just practice and wait. For us, every opponent is the same, when you reach the quarter-finals of a world championships, every team is on a high level. We have to concentrate on ourselves and work hard.”

Canada opened with a strong first half, as Kyra Christmas found the net twice in each of the first two period. The Canadians led Brazil 8-4 at the half. Over the last two periods Canada extended its lead, leaving Brazil nowhere to go. Haris Pavlidis, Canada’s head coach, said, “I feel satisfied with the result. Our goal was to be in the first two teams of the group. We’ll have an easier cross game. Our aim is to get into the top eight teams. We played with a great difference, except for the first half of the game. Generally I’m satisfied.”

Defending champion USA wrapped up their group action with another lopsided victory, this time defeating New Zealand. Spain, too, had a dominant win which secured them the second spot in the group.

USA jumped out to a 4-0 lead before New Zealand scored a pair of zingers. The two teams traded goals into the second quarter, when Maddie Musselman notched three in a row to give the USA a 10-3 lead. The Americans added two more and led 12-3 at the half. Team USA scored another 10 points to New Zealand’s 4 over the next two periods. Angela Winstanley-Smith, New Zealand’s head coach, said, “The girls made me proud 100 percent. America’s (USA) outstanding. They respected us tonight, they played hard, but the girls didn’t give up. They kept going. I’m really proud of them. The Hungarian fans cheering for us were awesome. The whole event, the arena, everything is incredible, so thanks to the organizers.” Her player Nicole Lewis added, “I think we played hard and with pride. I’m really happy to have the opportunity to play with the girls.”

Spain wrapped up group play in the number two position with a rout of South Africa. The South Africans had a few moments of brilliance, such as goalkeeper Rebecca Thomas’ blocked penalty, but there was little they could do to stop the Spanish scoring machine. Head coach Gareth Samuel of South Africa said, “We knew that Spain would win this game. They are clearly competing to win the tournament, and we just hoped to play as well as we could.”

Hungary won Group C in a thrilling deciding match over Netherlands in front of a sold-out crowd of 8000 screaming fans. France earned their first win in a nail-biter over Japan.

The host nation had the crowd on its feet as they won the deciding match over the Dutch. Hungary went ahead early in the second period on a backhand by Barbara Bujke, but soon thereafter captain Rita Keszthelyi left the game with a bloody nose. The times went off at halftime tied at 3. Dóra Czigány scored a pair of goals in the third period, and her “absolute rocket” was FINA’s play of the day:

Ildiko Toth of Hungary said, “When we heard about 8000 spectators shouting that the Dutch cannot score three goals we started to believe it too. Our audience was amazing. A big thank-you to them. I always thought that we would feel even when our supporters’ hearts beat at home, but this was something unbelievable here…There was a great deal of energy at the scene. In the second half we started to believe that we could win this match and our self-confidence led us to victory.”

The France-Japan match was tight from the outset. Tied at 3 after the first quarter, France took control of the second quarter, scoring three unanswered goals to go up 6-3 at the halftime break. Japan controlled the third quarter and brought the scored back even at 6-6. Estelle Millot put France up 7-6, but Akari Inaba scored her third goal and leveled the score at 7 each. France scored, then Japan, and now it was 8-8 with 4:02 left to play. Aurore Sacre broke the tie at 1:12, scoring on a power play, to give the French their first win of the tournament.

France’s head coach Florian Bruzzo said, “Since the strength of the Japanese team is the counter-attack, we decided to defend our territory and the final result proves that it was a good tactic. I am very satisfied with my team, they did strictly as we discussed. They played a perfect match.” Estelle Millot added, “I scored four goals and I’m happy about it, but it was mostly the team’s merit. I enjoyed the match a lot in this great atmosphere. It was a little bit surprising that so many French fans were here; they helped us a lot at the end of the game. It was an important battle; we thought that we had nothing to lose, we focused only on this match and on victory.”

Greece wrapped group play with a tight win over Australia, while Russia dominated Kazakhstan. Greece, Australia and Russia all finished with two wins, but goal differential put Greece on top of the group.

Australia started up 2-1 in the first quarter, but it was the only time they would lead Greece in the match. Greece soon made it 4-2, but Australia came back and the score was tied at 5-5 when they left at the half. Greece outscored Australia 6-3 over the next two periods, and finished group play undefeated. Keesja Gofers of Australia said, “It was a really tough game. In the second half we slowed down a little, and Greece did a really good job. Now, we are going to regroup and think about the knockout stage.”

Russia earned its second win of the tournament with a dominant performance over Kazakhstan, but because of point differential, they finished third in their group. The Russians controlled all four quarters, getting two or more goals from seven different players. Russia’s head coach Alexander Gaidukov said, “The Kazakh team is very good and they showed that they are worthy opponents and strong participants in this World Championship. Tonight we will find out who is our opponent in the cross-over stage. Both teams, the Hungarians and the Dutch, are great and have been playing together for years, so we will see. It will be interesting.”