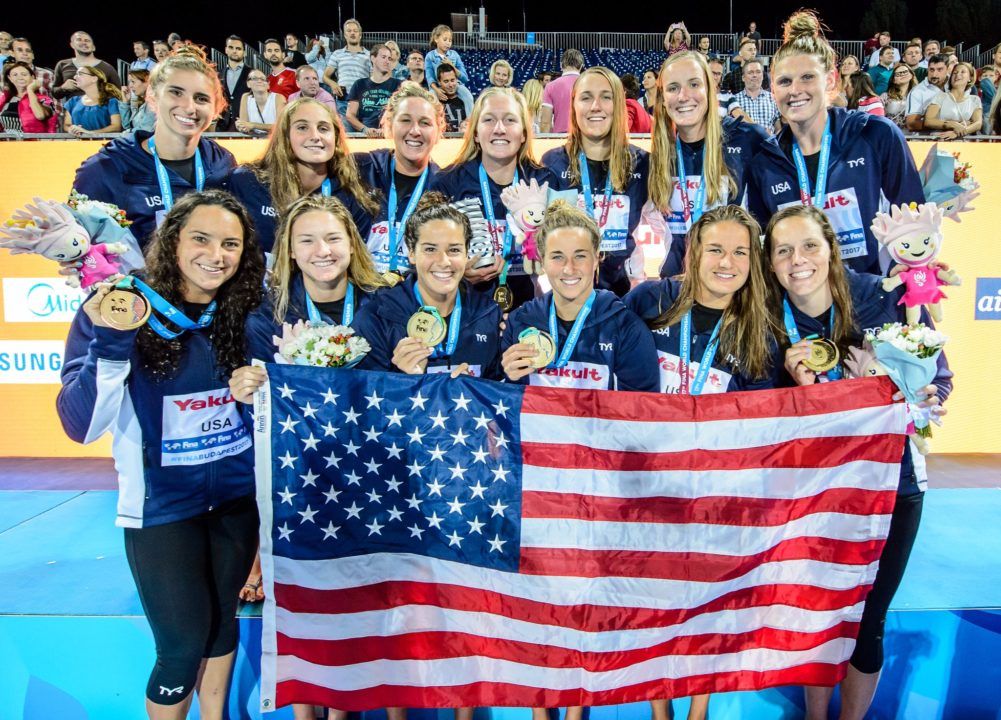 The USA Women’s National Team won their second straight FINA World Championship with a 13-6 victory over Spain on Friday in Budapest. Current photo via @USAWP on Twitter

The United States women’s water polo team won its second consecutive World Championship gold medal on Friday in Budapest, with a 13-6 victory over 2013 champion, Spain. The Americans have claimed the title in five of the last eight World Championship tournaments, winning in 2003, 2007, 2009, 2015, and now 2017.

Melissa Seidemann put Team USA on the scoreboard with the first goal of the game, on a power play midway through the first period. Beatriz Ortiz answered with an outside shot as a power play was ending tying the score at 1-1 with 2:21 left in first. Jordan Raney took a pass from Aria Fischer and scored to put the USA ahead 2-1.

Spain’s Anna Espar netted one on a penalty conversion to open the second period. Kiley Neushul scored on a power play with 6:12 left in the half, giving the USA a 3-2 lead. Ortiz scored again from the outside and tied the score at 3-3 with 5:54 left on the clock. Team USA then proceeded to add two in quick succession: a power play skip from Neushul, followed by a cross-cage power shot from Maddie Musselman, to go up 5-3 at the half.

Espar opened the third period with a high corner goal to reduce USA’s margin to one point. But the USA scored four in a row, and five of the next six goals, to end the quarter with a 10-5 lead. Neushul, Rachel Fattal, captain Maggie Steffens, and Mackenzie Fisher all found the net before Paula Leiton gave Spain their 5th goal with 25 seconds left in the third. Musselman broke away from her defender to score one last time in the third, on a stellar pass from Neushul, and the USA led 10-5 heading into the final period.

Steffens began the final period with a beautiful shot into the upper corner, then sent a pass to Neushul which put the Americans up 12-5 with 5:06 left in the game. Musselman scored on a power play with 3:42 left on the clock. Spain’s Espar tallied her third with 1:23 left, making the score 13-6. That was the final goal of the game, and USA went home with the gold.

Gabby Stone had six saves for Team USA and Laura Ester had four for Spain. The Americans converted 10 of 13 6-on-5 situations, while Spain scored in just 2 of 6.

And no personal tragedy (that I know of) for US Coach Krikorian in 2017, unlike Rio… even better!