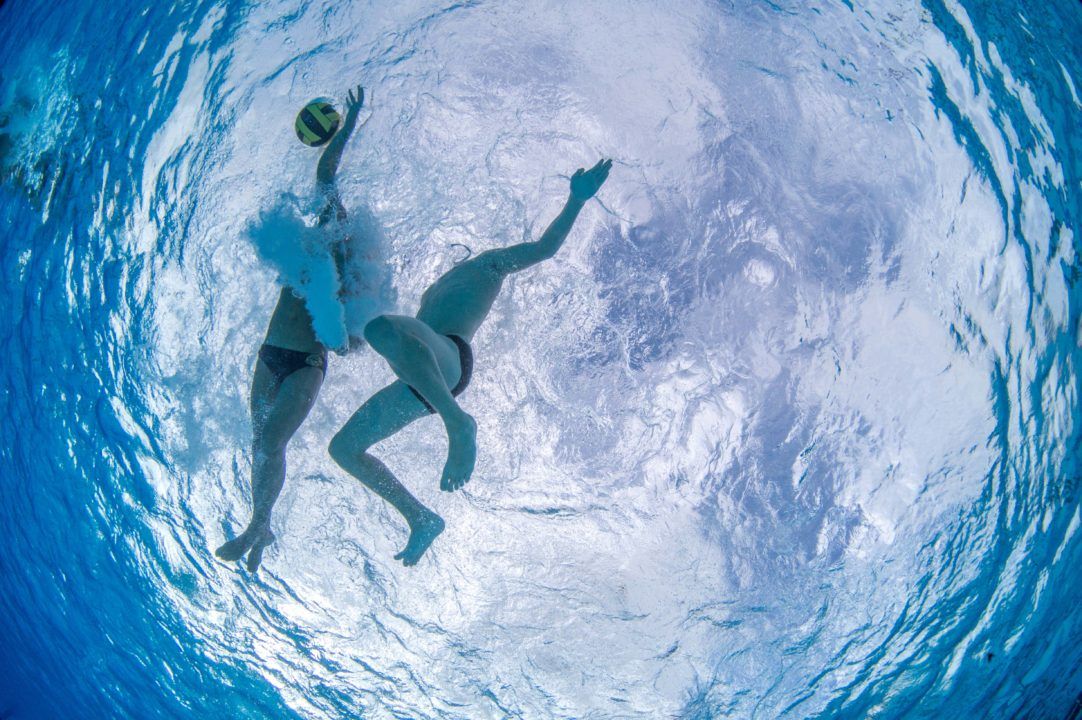 Serbia, Croatia, Montenegro, and Hungary all won their respective groups and advance to the quarter-finals of the men's tournament in Budapest. Stock photo via Mike Lewis/Ola Vista Photography

The group winners have a bye in the next round while the other 12 teams will either play to determine who advances, or will play off for 13-16 classifications.

Montenegro earned its spot at the head of the group, beating Kazakhstan to remain undefeated, while Brazil came from behind three times to draw with Canada, which allowed them to finish in second place.

Montenegro scored the first 7 goals, then topped it off with a 13-5 victory over Kazakhstan, securing their place at the top of the group. Head coach Vladimir Gojkovic, said, “The result was pretty much expected. Now, we will prepare for the next matches that we will be playing, those are going to be tough, but we are ready to give our very best, and show the quality of Montenegrin water polo.” His player Aleksa Ukropina added, “We lived up to the expectations, our goal was to be the best in our group, and we have achieved that. We were doing excellent from the start of the game until the end, and the result shows that, indeed. We are now preparing for the next game, against Greece, which is going to be tough. But we know what we are capable of- we are always playing on the highest level and we surely will give our best.”

With everything riding on the outcome of this match to see who would move on as the second-place team in the group, Brazil, who needed only a draw, did the necessary. Coming from behind three times, they finished tied with Canada at 6. It was a heartbreaking match for the Canadians, though, who would have been second had they won but instead moved to fourth in the group.

Brazil’s Pedro Stellet said, “I feel great. We have a very young team, Canada as well. We didn’t know what to expect before the championship, but incredibly we made history going through the group stage. The weather is not like here, as in Brazil it’s winter, so we enjoy ourselves outside here in Budapest; it’s beautiful.” Canada’s head coach Giuseppe Porzio said, “We had a chance to win the match, but we were unlucky. I’m very sad for that; we are out from the main competition, but at the same time I trust in this team because they are very young, they are improving a lot match after match and hopefully for Canada we will have more chances to get a proof of our skill and value.”

To the delight of the crowd, host nation Hungary assured its spot in the quarter finals of the men’s water polo tournament with a win over France. Italy downed Australia in the other Group B match.

Hungary got out to a 6-0 lead before France put a goal in the net. The French got the better of the second quarter, though, and the teams went off for the halftime break with the host nation leading, 8-4. Hungary dominated the third period, getting goals from Norbert Hosnyanszky, Denes Varga and Miklos Gor-Nagy. Both teams scored twice in the final period (both French goals were signed Mehdi Marzouki), but Hungary took the W by a six-goal margin, 13-7. Hungary’s head coach Tamás Märcz declared, “It is not easy to get the energy, the rhythm for a game like this, but my team made an excellent performance. The concentration was at a high level during the whole game. Our plan was to give a rest to Balazs Harai, our center forward, and this goal was successful because all my players did their best in the pool.”

Italy got the win, but fell short of the Italy 11-goal differential they needed to advance straight to the quarter-finals. Michael Bodegas scored a hat trick in the first period for Italy. At half-time, leading 8-2, the Italians were hopeful they could increase their margin to the 11 points they needed, but Australia won the third period, and Italy needed 6 unanswered goals in the fourth. They scored three, but not six, and now must get through the round of 16 to continue.

Serbia won a tough match against Greece to top Group C. It was Greece’s first loss of the tournament. Spain handled South Africa rather easily, and will move on the second round, while South Africa will play for 13-16th place.

Serbian captain Filip Filpovic scored three goals en route to beating undefeated Greece in their last match-up of group play. Greece scored on two penalties but failed to convert in 9 extra-man situations. The match was extremely tight through the first half, but Greece fell apart in the third quarter and Serbia took advantage with three unanswered goals. There wasn’t anything Greece could do to get back into the match at that point, and Serbia pocked the 11-6 win.

Spain earned their first win of the tournament with a convincing rout of South Africa. Spain opened the score and led 2-0, but South Africa evened it with a pair of their own. Spain ended the first quarter with a 3-2 lead, then added another goal in the second. The next two quarters were all Spain, with South Africa only managing to put one into the next in each period.

Unbeaten Croatia won Group D with a 16-6 romp over Japan. The United States defeated Japan in its final match-up, but failed to get the 8-goal differential it needed to avoid having to play for 13-16th.

Croatia controlled all four quarters to remain undefeated in group play. Japan didn’t have the same punch they had against Russia, and they were overwhelmed early on when Croatia went up 5-1 in the first quarter and 10-4 at the half. It was a scoring bonanza for the Croatians with 8 different players finding the net. Croatia scored in all seven extra-man situations, while Japan only converted one of eight.

The USA beat Russia in a tumultuous match that eventually saw their head coach Dejan Udovicic red-carded. Although the Americans beat the Russians, their three-goal margin wasn’t enough to allow for the possibility of earning a berth into the quarter-finals. USA will play for 13-16th place for the first time, as previously their lowest finish was 11th in 2005. The Americans started well, gaining the upper hand early with a 6-1 lead at the first quarter. Russia won the second period though, and it was 9-6 at the half. Five more goals for each team did nothing to change the USA’s margin, though, and they finished fourth in the group.