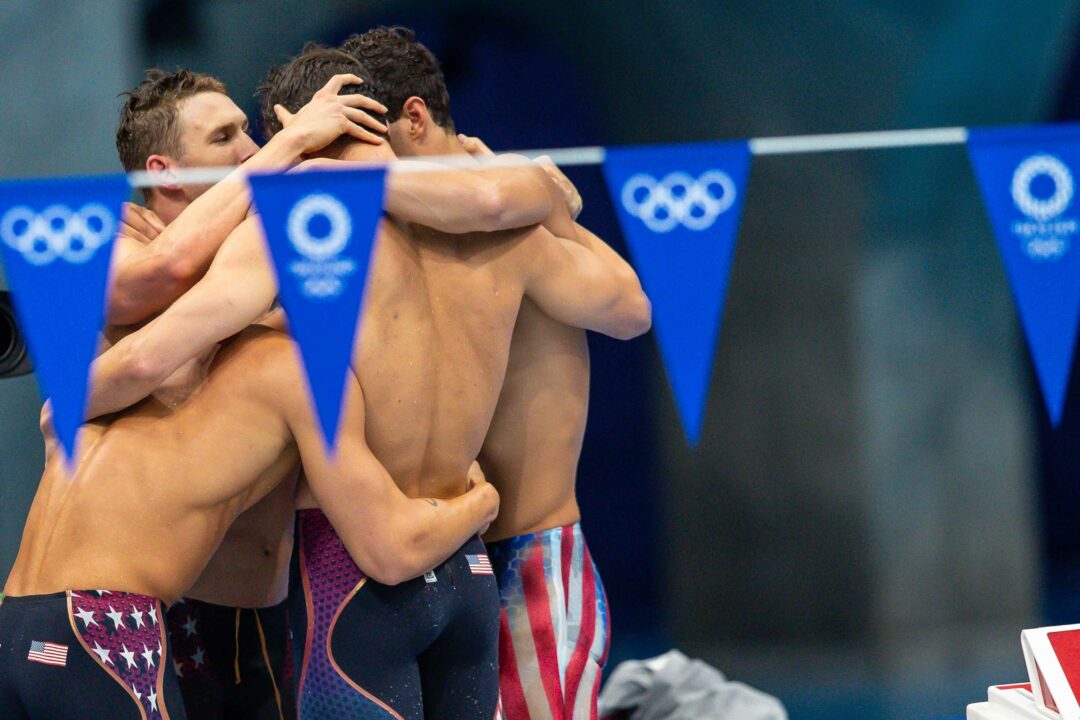 There was more on the line for the U.S. in this race than just a Gold medal. For Team USA, the men's 4x100 medley relay is a matter of tradition and legacy. Current photo via Jack Spitser/Spitser Photography

The final pool event of the Tokyo 2020 Olympics did not disappoint, as the United States fought a fierce battle out of lane 1 against Great Britain. There was more on the line for the U.S. in this race than just a Gold medal. For USA Swimming, the men’s 4×100 medley relay is a matter of tradition and legacy.

The Americans have never lost an Olympic men’s 4×100 medley relay. There was one time in the history of the Olympics that the USA didn’t win the event, and that was the 1980 Olympics held in Moscow. The reason the US didn’t win that year is because they weren’t there due to an American Boycott of those Games.

After a scare in prelims in which the US squad narrowly advanced, they bounced back in tremendous fashion, breaking the World Record, which was a super-suited WR featuring Michael Phelps. The US coaching staff also had a difficult decision to make pertaining to the breaststroke leg on this relay. Michael Andrew was the clear choice going into this meet, but some slightly off performances as the meet went on, coupled with the fact that he was also racing the 50 free final tonight cast doubt on whether to call on him. Andrew Wilson wasn’t in the same form we saw from him at U.S. Trials, and posted a 59.09 in prelims of this relay. There was also the option of Nic Fink, who swam exceptionally well in the 200 breast here in Tokyo.

Ultimately, it appears going with Michael Andrew was the right decision for Team USA. Andrew split a 58.49 for his squad, which is a time that seems highly unlikely Wilson or Fink would have been able to match. Andrew’s leg was pivotal for the Americans, as Great Britain’s Adam Peaty was at the top of his game, splitting 56.53.

The name of the game for the US going up against Great Britain in medley relays is capitalizing on Great Britain’s slight lack of strength in sprint backstroke, and minimizing the devastating impact of Peaty’s breaststroke dominance. Beyond the 200m mark, things look good for the Americans, who have Caeleb Dressel, the fastest butterflier in history, and Zach Apple, who can match the best in World on freestyle relay splits.

Things played out as well as the US could have possibly hoped for. Ryan Murphy got the team out to a 1.32-second lead over Great Britain, then Michael Andrew managed to split within 2 seconds of Peaty. Diving in 0.64 seconds behind James Guy, Dressel’s job was simple, and he still overperformed. The phenom posted the fastest fly split in history – 49.03, to hand Apple a 0.60-second lead over Duncan Scott. Apple made the most out of his clean water, clocking a blistering 46.95 to bring it home under the World Record.

Here is a split comparison between the US’ swim tonight, and the previous World Record from 2009:

Incredibly, the biggest difference between this relay and the former World Record relay was Dressel’s improvement over Michael Phelps.

The NBC video of Rowdy announcing the race! Like he was swimming it himself. Gotta love him.

By the end, I felt kind of bad for MA so I’m glad he had a silver lining to his games.

I always love seeing Dave Walters on lists, one of my favorite swimmers to watch.

Dressel time mind blowing. Shows passion to swim harder for “team” than “self”

If you re-watch, there’s a pretty interesting moment after Guy’s 2nd 50. While he had the slight lead, he takes a look over and sees Dressel powering past him. That has to be a helpless feeling 🙁

Where is Steve Nolan? I need to drink more of his tears. Hey Steve, COPE!

Or the people saying they wouldn’t medal? They seemed to go into hiding.

From now on please refer to him as “Olympic Gold Medalist and World Record Holder, Michael Andrew!” Thanks buddy.

MA looked like Shaq boxing out Zapple in the TV interview.