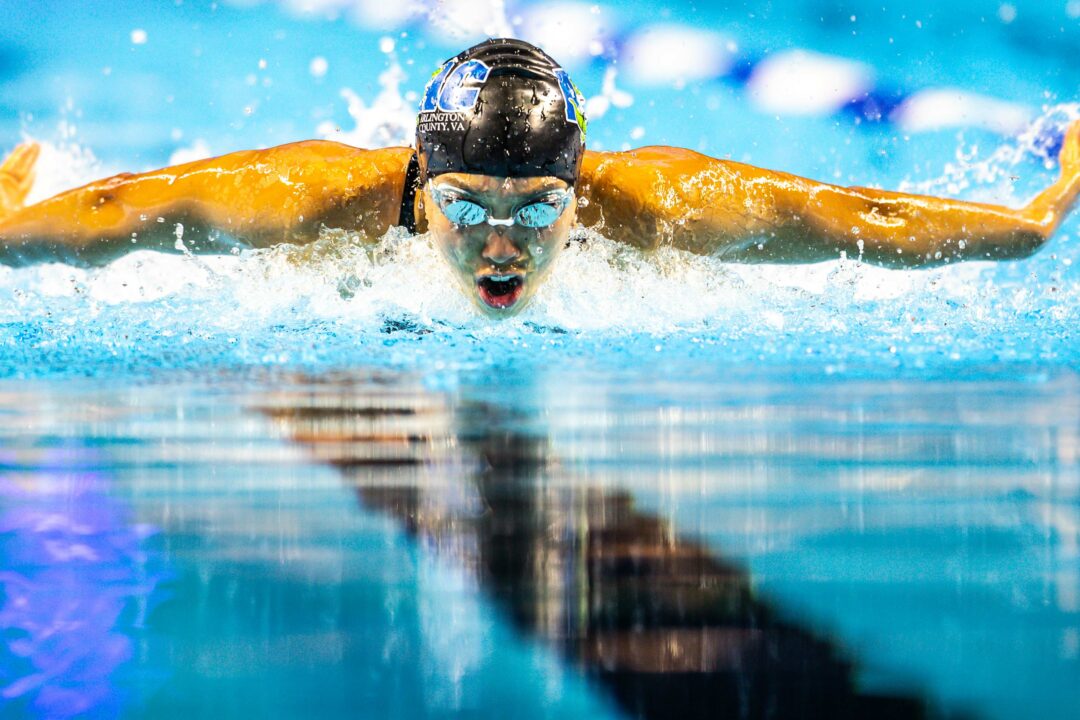 18 year-old Torri Huske of the Arlington Aquatic Club broke her American Record in the 100 fly en route to qualifying for her first Olympic team. Current photo via Jack Spitser/Spitser Photography

18 year-old Torri Huske of the Arlington Aquatic Club broke the American Record in the 100 fly that she set yesterday en route to qualifying for her first Olympic team. Her time of 55.66 shaved 0.12s off of yesterday’s mark, and will also stand as U.S. Open, LC Nationals, and 17-18 age group records.

Tonight, she altered her race strategy a bit, going out in a blazing 25.65, over three-tenths faster than in semis, before bringing it home in 30.01s.

Huske’s time keeps her at #3 all-time in history, but puts her within just 0.04s of Zhang Yufei for #2 on that list, and just 0.18s behind Sarah Sjostrom’s world record.

Second place went to 16 year-old Claire Curzan, whose time of 56.43 was just a bit off of her personal best, but should guarantee her a trip Tokyo as well. Four of the top five American women ever in the event were competing tonight, and Kate Douglass improved her lifetime best to 56.56, keeping her at the #5 spot all-time among US women.

How do we like Huske’s odds at a WR in Tokyo? She seems to perform in big meets, she just dropped nearly a second to qualify for the Olympic team

Thank you for the pandemic postponed Olympics games!

Someone’s gonna’ break it. You got Zhang Yufei, Huske, MacNeil, McKeon, Curzan – between them I’d say the odds are very very very good.

Now, if FINA would expeditiously update the year-to-date rankings:

Canada is the only country that has not officially conducted Olympic Team Trials with respect to the women’s 100 meter butterfly.

crazy how we have 3 55 swimmers this year, maybe 4 after canadian trials, and none of them are sarah sjostrom

feels like Sarah is left behind at this point …..sheeesh

lets not make superlatives for the sake of it…no one has left Sarah behind. Just because of a freak injury we wont see her but she will be back.

Left behind? Wow, that’s super harsh??!! Sjostrom is a legend in the sport, with an ill-timed injury. You realize in the next round or two of Olympic trials these current 16-18yo’s will be in Kelsi Dahlia’s position: having to face the new young guns with nothing to lose.

Sjostrom is recovering from elbow surgery.