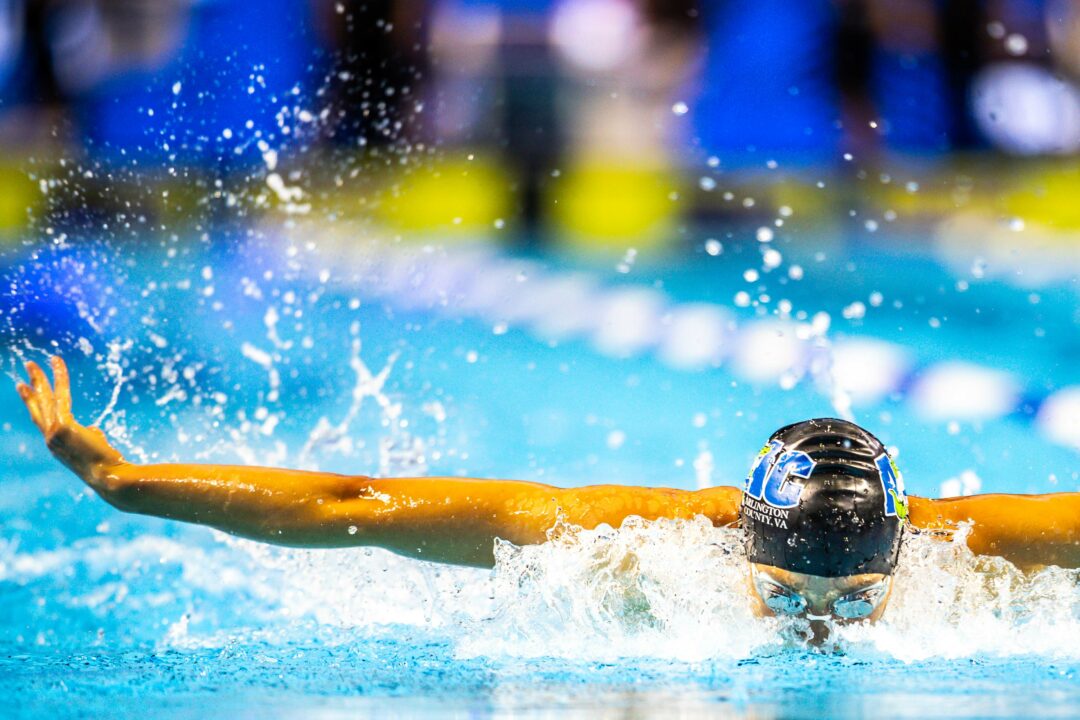 18-Year-Old Arlington Aquatic Club swimmer Torri Huske just exploded in the first heat of women’s 100 fly semifinals, breaking the American Record. After showing off her speed this morning, splitting under World Record pace on the first 50, Huske blasted a 55.78 to touch first tonight. The swim marks a personal best by nearly a full second, and makes Huske just the 2nd American of all-time to break 56 seconds in the event.

The previous American Record was held by Dana Vollmer at 55.98, which she set at the 2012 Olympics. The swim also makes Huske the #3 performer in the world all-time, behind only World Record holder Sarah Sjostrom, and Zhang Yufei. Here is a split comparison between the old American Record, and Huske’s swim tonight:

In terms of the impact on the Olympic picture, of course Huske has to finish in the top 2 tomorrow night to advance to the Olympics. Assuming she does that, she’s now in the thick of it with Yufei, who hails from China, and the defending World Champion, Maggie MacNeil, both of whom are sub-56 100 flyers.

In addition to breaking the American Record, Huske broke the USA’s 17-18 girls National Age Group Record, and the U.S. Open Record. Huske was under the World Junior Record, however, she turns 19 in December of this year, making her ineligible to count as a junior swimmer.

It has been amazing watching Claire and Torri race it out!!

Blown away! What can Huske do in Tokyo? And you know this means she has a 52 mid flat start 100 free in her. Question– is Curzan playing possum? Or a bit off?

we shall see today and later this week ….100 free mystery race ….

I’m so annoyed by FINA’s junior swimmer rules. It benefits swimmers born in January compared to those born in December. Just base it off of their birthdays

Indeed, it is flawed. But it doesn’t matters for Huske either way; ‘girls’ are only eligible through the year they turn 17, so Huske, born in 2002, was a junior in FINA’s eyes through 2019

Michael Andrew’s AR was expected. This one was not. I thought 56.0 was the fastest we’d possibly see tonight.

I hope she can sleep tonight. If I were her I wouldn’t.

I would sleep like a baby. It’s Kelsi Dahlia who is on pins and needles.

Anyone know where Torri Huske is going to college?

Stanford- the Stanford social media is all over this American record.

I thought 100 fly WR might be vulnerable at trials….might’ve picked wrong teenager to break it, however

I thought the same thing! Could we see a mid 52 from huske later this week?