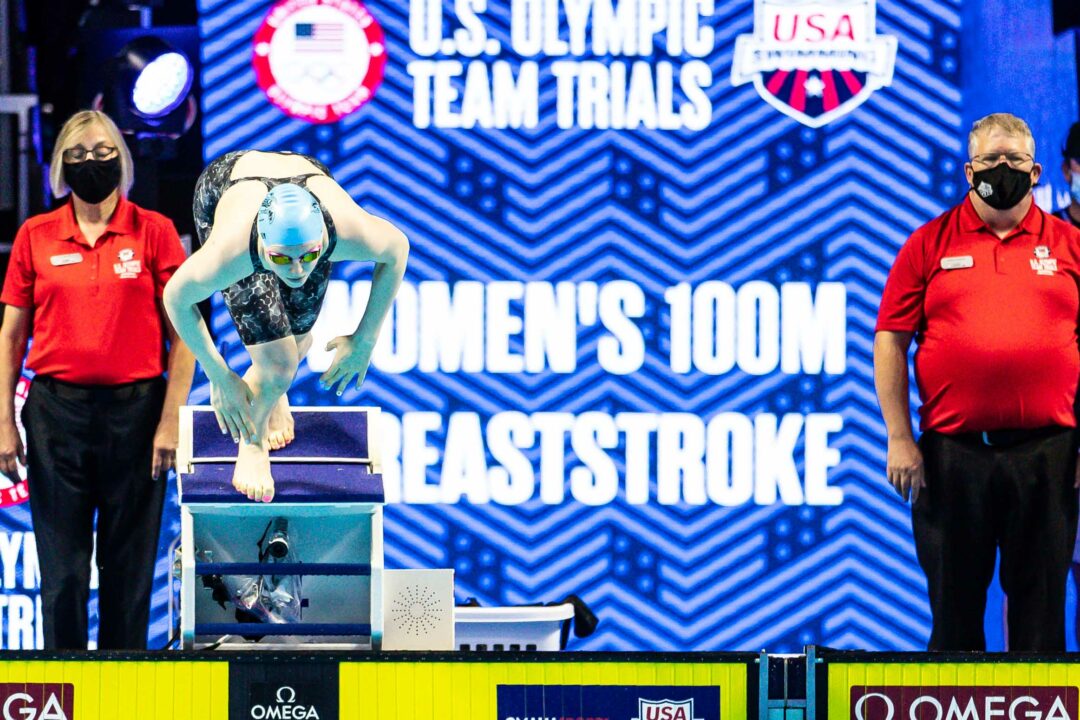 Lydia Jacoby, a 17-year-old out of Seward Tsunami in Alaska, torched the first heat of women's 100 breast semifinals, touching in 1:05.71. Current photo via Jack Spitser/Spitser Photography

Lydia Jacoby, a 17-year-old out of Seward Tsunami in Alaska, torched the first heat of women’s 100 breast semifinals, touching in 1:05.71. The swim was not only a personal best by about half a second, it also marked a 17-18 girls National Age Group Record for the 17-year-old. It was also briefly the 3rd-fastest time in the world this year, until the 2nd heat of semifinals, when Annie Lazor jumped Jacoby in the rankings with a 1:05.37.

As you can see, Jacoby was faster on both 50s in her race tonight, resulting in a 0.67-second improvement. Jacoby also now finds herself as the 4th-fastest swimmer in the world this year, along with fellow Americans Lilly King and Annie Lazor, who are 1st and 2nd, respectively.

In addition the the record and the world ranking, Jacoby now stands on the cusp of making history tomorrow night. She is the 3rd seed for tomorrow night’s final, where she will attempt to become the first Alaskan swimmer ever to make the U.S. Olympic team. She’ll have a fight on her hands, however, as both Annie Lazor and Bethany Galat swam 1:05s today as well. Jacoby would also be the 3rd teenager to make the Olympic team this year if she does finish in the top 2 tomorrow.

Lydia is the crowd favorite

Lydia is a fantastic story. A youngster from Alaska making the team would be awesome.

Annie is a fantastic story. Someone who didn’t know if they wanted to continue swimming past college but believing there was something in there, and working to find it at 26 would be awesome.

Bethany is a fantastic story. A late bloomer who worked her way into national finals but has never quite crossed the threshold then putting it all together at the biggest meet of her life would be awesome.

Whoever qualifies for the team, the US will be well represented.