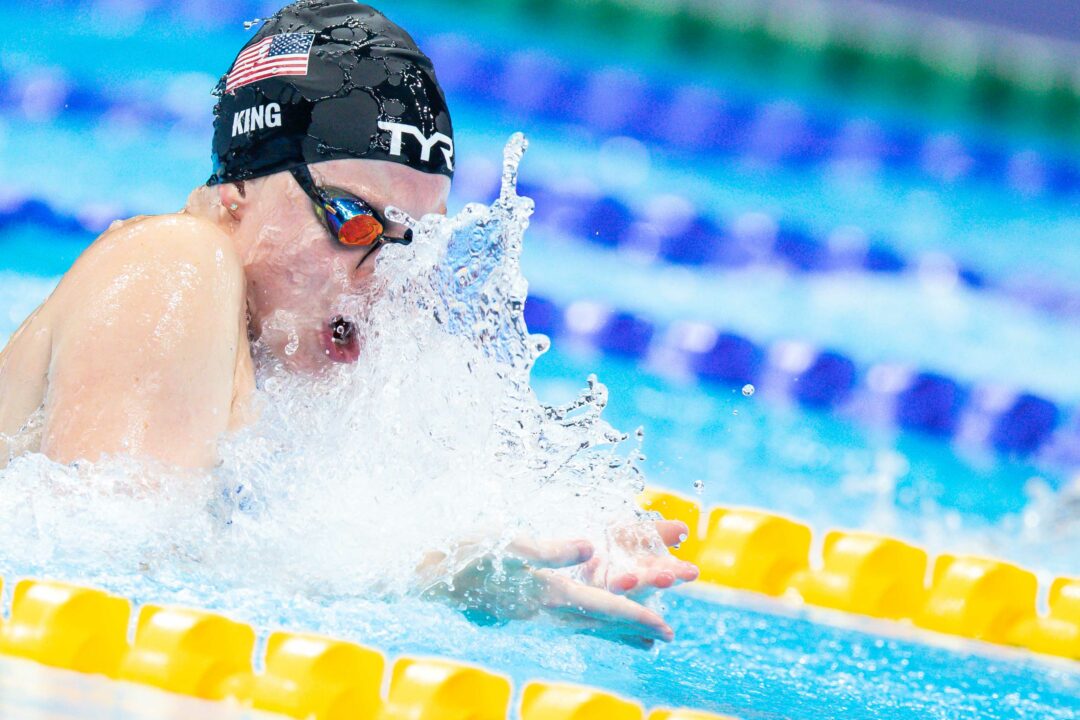 King and Schoenmaker will battle in the 200 breast after Schoenmaker beat King in the 100 breast. Murphy and Rylov have a similar story in the 200 back. Current photo via Jack Spitser/Spitser Photography

World Record holder Sarah Sjostrom of Sweden will battle the likes of Australia’s Cate Campbell and Emma McKeon in the first event of day 5, the women’s 100 freestyle.

Sjostrom surprised herself earlier in the meet with a solid 7th place finish in the 100 fly after dealing with an elbow injury earlier this year which kept her from training butterfly for the majority of the season.

Campbell finished 6th in the 100 free in Rio and McKeon leads the 100 free world rankings this season with a 52.19 from June. Canada’s Penny Oleksiak, who won bronze in the 200 free, is also a top contender in this event.

The 2nd event of the prelims session will be the men’s 200 back, led by top seed Evgeny Rylov of the Russian Olympic Committee and USA’s Ryan Murphy.

Rylov won gold in the 100 back earlier where World Record holder Murphy won bronze. Murphy is the defending Olympic gold medalist in the 200 back event, where Rylov took bronze in 2016.

Rylov holds five of the 17 all-time fastest 200 back performances in history, more than any other swimmer, and has proven himself to be a serious gold medal contender in Tokyo.

China’s Xu Jiayu and Great Britain’s Luke Greenbank are also in contention to place highly here. Xu finished 5th in the 100 back final whereas Greenbank placed 17th in prelims. USA’s Bryce Mefford joins them as the only other sub 1:55 swimmer this year.

The women’s 200 breast is the 3rd event of the session and is set up for some excitement after South Africa’s Tatjana Schoenmaker upset USA’s Lilly King in the 100 breast final.

They are joined by USA’s Annie Lazor at the top of the field in this event. Lazor won this race at the U.S. Olympic Trials against King and has been consistently ranked in the top 3 in the world for the past 3 years.

If Abbie Wood or Molly Renshaw can podium in this event, they would be breaking a 60-year-old Olympic medal drought in this event for Great Britain.

The penultimate race of the session is the men’s 200 IM where the top seeds are USA’s Michael Andrew and Japan’s Daiya Seto, the defending World Champion.

Seto has had some rough swims so far, narrowly missing the 400 IM final and the 200 fly final when he was a medal contender in both events.

Watch out for USA’s Chase Kalisz, who won gold in the 400IM earlier, and Great Britain’s Duncan Scott who recently set the British Record in this event with a sub-1:55.90.

The women’s 4×200 free relay is the last event of the prelims session. The favorites here are Australia (with 200 free gold medalist Ariarne Titmus and Madison Wilson who placed 8th), USA (with 200 free 5th place finisher Katie Ledecky), and Canada (with Penny Oleksiak who won bronze in the 200 free.)

Psyched for the W100 Free. SUCH a strong field this year!

and they didn’t mention that Penny is the defending Olympic co-champ!😂

Sure you didn’t mean Penny Oleksiak re W100free ?

Interested to see what Lazor can do in 200 breast, Indiana swimmers have looked good other than King.

W100FR a dogfight. Emma Mckeon and Oleksiak look to be the most on form but medals could come from anywhere.

Difficult to see past Rylov in the 200, dude’s been absolutely on fire all week and I think he’ll take a chunk out of that textile record in the final.

Agree that Scott & Kalisz look good value. Am ambivalent re the Human Headline and would be significantly surprised to see Larkin being a real factor.

Am thinking Schoenmaker and Lazor looking the main story in W200BRS.

Being part of a team that has, at least on women’s side, firing (rather than misfiring like Rio) may well be a positive for McKeon & esp C1 in W100FR but do think Oleksiak a major danger along with Haughey. The latter will also NOT have the impacts of W4X200 & MMR that may (but hopefully not re MMR) that McKeon & Oleksiak face.

Concur that Rylov looks “the business” in M200BK. Not going to rule out Murphy but he’s… Read more »

Though it may not progress any further, Hong Kong have a team in the W4x200 Free tonight..

I think Larkin will get a medal

schoenmaker’s newfound speed in the 100 will probably see her dip under 2:20. even if she regresses through the rounds, I feel like there’ll be enough cushion for her to still win

Rylov has been the most consistent 200 backstroker for the last 6 years, so his result in the 100 (weaker event for him) is ominous for the 200. no surprises if he goes 1:52 in the final

Scott is definitely the favourite into the 200 IM going off his 200 free. chase did win the 400 but didn’t looked as sharp as before, but will probably medal. not sold on MA so far

mckeon, oleksiak and haughey favourites for the 100 free, but this event often surprises. will… Read more »

Womens 100 Free: Tough to call a favourite here. I would say Emma McKeown but she’s yet to win an individual gold on the global stage. My dark horse is Oleksiak – proven championship performer and she’s remained under the radar since Rio, which may work to her advantage. I think the whole of the swimming world would be thrilled to see C1 take Gold.

Mens 200 Back: What can Rylov do here after his win in the 100? How will Murphy respond to losing his first Olympic title? Looking forward to seeing where Luke Greenbank is at over 4 lengths and whether or not he is in the fight for bronze.

Oleksiak hasn’t been under the radar in Tokyo. Any swimmer with half a brain would know she’s gonna be a threat.

I meant between Rio and Tokyo.