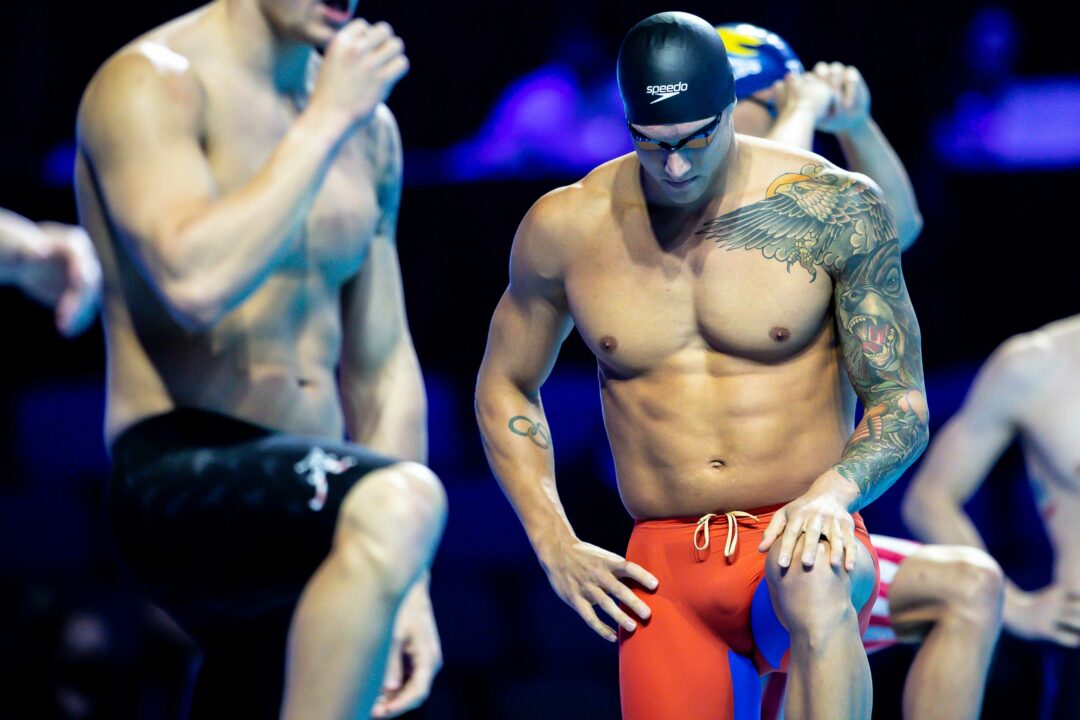 Caeleb Dressel has led the world rankings of the 50m free for the past three seasons. He matched his lifetime best time of 21.04 at the U.S. Olympic Trials. Archive photo via Jack Spitser/Spitser Photography

World Record holder Caeleb Dressel has been untouchable when it comes to the 50 free these past few years.

Dressel has ended this season and the past two seasons as the fastest swimmer in this event in the world.

The 6’3” butterfly and freestyle sprint machine Caeleb Dressel will have some competition in the 100 fly with the likes of Andrei Minakov and Kristof Milak and the 100 free with Kyle Chalmers and Kliment Kolesnikov.

But in the 50? The next closest swimmer to him this season was Russia’s Vlad Morozov who trails Dressel’s 21.04 by .37 this season. While his 100 free has not been the strongest this season, he still seems locked into the final in the 50 free.

A few things create that gap between Dressel and everyone else. First is his powerful start and his 4.8 second first 15 meters off the blocks. With just a straight shot down the pool and no turns, it’s hard to see what could take the gold away from him.

The 2016 Olympic relay medalist will be put on World Record watch in this event, as the current men’s 50 free world record was set back in 2009 by Brazil’s Cesar Cielo at 20.91.

We’ve only seen this World record fall once on the Olympic stage and it was when USA’s Matt Biondi took it down at the 1988 Seoul Olympics with a 22.14.

Another thing to look out for: the most gold medals won in this event by the same person is two. Russia’s Alexander Popov did it in 1992 and 1996, Team USA’s Anthony Ervin and Gary Hall Jr. tied for gold in 2000 and each won gold again on their own in the following years.

The only swimmer on track to compete that feat in Tokyo is France’s Florent Manaudou, but he hasn’t been under 21.50 since the 2016 Olympics. His best time in that time period is 21.56 from January 2020.

This season, he posted a 21.67 at the recent European Championships to place 5th.

Manaudou decided to retire after the Rio Olympics where he was out touched by gold medalist Ervin in the 50 free by .01. He turned to handball in his retirement before returning to pool competition in March 2019. You can read more about his comeback journey here.

Notably, Australia’s Pinnacle Sports Book does not consider him in line to win the event in Tokyo.

Finland’s Ari-Pekka Liukkonen won that race at the European Championships with a season-best time of 21.61 to become the 6th fastest 50 freestyler in the world this year. Standing at 6’10”, Liukkonen surprised the world when he won his first major international title in the event with only one dolphin kick off the start.

You can see his race video here.

26-year-old Proud finished 4th in this event at the Rio Olympics, juist .19 behind bronze medalist Nathan Adrian of Team USA. Gkolomeev made it all the way to semifinals in this event, and placed 13th overall.

Gkolomeev’s fastest 50 free since Rio was a 21.44 from the 2018 European Championships.

At the U.S. Olympic Trials Wave II, Michael Andrew made himself a serious contender for the podium in this event by blasting a 21.48. He is ranked 4th in the world this season, just .06 behind Proud.

Andrew is coming off an incredibly strong performance at the U.S. Olympic Trials where he broke the American Record in the 100 breast twice. While he snagged 2nd behind Dressel in the 50 free by .44, he out touched 2016 Olympic bronze medalist Adrian by .25.

Thom de Boer of the Netherlands is also ranked within the top 10 this season with a  lifetime best time of 21.58 from July to rank himself 5th in the world this season and break his own Dutch National record.

29-year-old De Boer has been very consistent in this event, posting a time of 21.62 in December 2020. He took 4th place in this event at the recent European Championships with a time of 21.80, edging out Manaudou by .01.

One name to watch who is not ranked within the top ten in the world this season is Brazil’s Bruno Fratus who finished 6th in this event at the Rio Olympics. His fastest time since then was a 21.27 he posted at the 2017 World Championships.

He recently won gold in this event at the Sette Colli Trophy with a time of 21.71.

The 50 free is the only individual event entry for Proud, Morozov, Manaudou, Gkolomeev, and de boer.

Breaststroke, IM, and sprint free specialist Andrew is set to swim the 100 breast, 200 IM, 50 free so he will have already had a few swims before the 50 free.

Dark Horse: Pawel Juraszek of Poland is another swimmer to watch in Tokyo. His season-best time of 21.72 from April ranks him But he did fall off a bit at the recent European Championships, finishing 9th with a time of 21.97

Juraszek posted a 21.45 at the 2018 Polish Championships. The 50 free is also Juraszek’s only individual event entry in Tokyo.

I picked Dressel, Fratus and Proud for the podium. Dressel is close to being a lock for the gold.

In the Olympic Pick’em Contest, I pick Dressel to sweep golds from all of his individual events : 50m free, 100m free and 100m fly. I want him to become the 1st male sprinter who does it at Olympic, something the great Matt Biondi was very close to achieve that, but failed at the very last stroke in 100m fly, losing to Anthony Nesty of Suriname with only 0.01 sec margin.
If Inge De Bruijn could do it at 2000 Olympic, I believe Dressel can do it too.

I think it will be Dressel for gold and Andrew/Morozov/Manaudou/Proud for silver/bronze. The other 3 spots in the final will (in my opinion) be between Liukkonen/De Boer/Grousset/Seeliger/Gkolomeev/Juraszek/Fratus/Puts/Miressi and Hayden (as dark horse). This shows how incredibly close the semifinals should be with at least 10 guys fighting for the 6th to 8th spot in the final. If i would have to pick 3 medalists, i would probably pick Dressel, Manaudou and Proud (thinking that Andrew might be too tired at the end of the week).

Definitely depends on the person, I know some people who purposefully get angry before their races to hype themselves up, but personally I need to be in a good mood and pretty care free to swim well

Theoretically, at least what the track sprinters and Tony Ervin say, staying relaxed when sprinting is the key. So maybe for a 50 free, angry not so good. Angry worked for Phelps at Worlds beating Cavic in the 100 fly and in Rio beating LeClos in the 200 fly.

He is not the fastest swimmer. Fratus gained on him like crazy at Worlds, just like Chalmers did in the 100. He’s so much better at “swimming” with fly compared to his free.

Faster starter yes but fratus has the most speed over water

Honestly wonder how Biondi/Jager/Popov etc would shape up if you gave them a modern track start and underwater.

Dressel should win this easily, the only question is whether he ‘ll win with a WR or not. As for Morozov he always flopped in the big meets, I don’t see why Tokyo would be any different. Probably will not even make the final.