The Golden States: Which U.S. States Are Home to the Most Olympic Medalists? 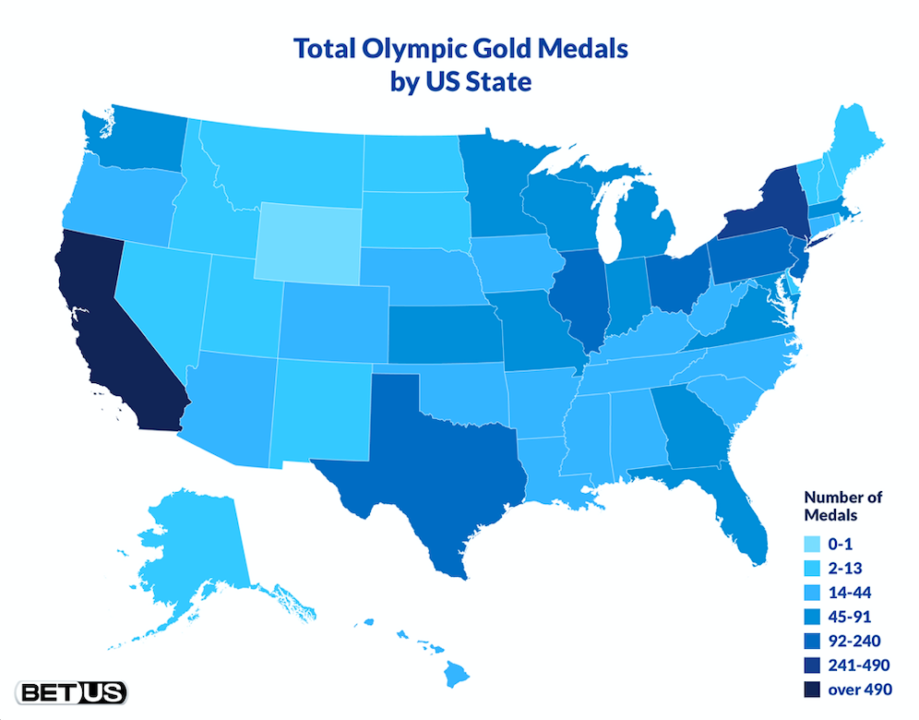 The United States topped the Tokyo 2020 Olympic Games medal table both in swimming and overall.

Take a look at which states have earned the most gold for Team USA since 1896 – that’s more than 60 summer and winter Games total.

Californian athletes have kept the gold rush going, amassing 491 gold Olympic medals since 1896. That’s almost double the amount that New York, the state with the 2nd-most gold medals in the country, has won (246).

Data and map courtesy of BetUS

California is home to 9-time Olympic gold medalist Mark Spitz. He won 7 of his gold medals at the 1972 Munich Olympics, all of which were earned with World Record times.

The swimmers with the next-highest amount of gold medals in California are Matt Biondi and Aaron Peirsol.

Together they total 13 Olympic gold medals.

New Jersey, with its relatively small population size of about 8.9 million as of 2019 compared to California’s 39.5 million, is small but mighty. The state is ranked #6 on the U.S. Olympic gold medal count with 92 medals since 1896.

Data and chart courtesy of BetUS

This year, 17-year-old Lydia Jacoby made headlines by becoming Alaska’s first-ever Olympic swimmer. Then, she won their 3rd gold medal in any sport since 1896.

Wyoming and North Dakota sit at the bottom of this count. They have won 1 and 2 gold medals, respectively, since 1896.

Note that individual Olympic gold medals were counted, as well as team gold medals. For example, if a team won gold, in this data a medal would be counted for each member of the team.

Also, athletes were counted based on the state they were born in, not necessarily their hometown.

Figures Ohio has quite a few. Nothing to do there really but train for something and occasionally go toCedar Point.

Why are so many astronauts from Ohio?

It’s the furthest you can possibly get from Ohio

I’d much rather see this per capita.

It would probably need to have some time-varying component to the per capita as the population per state did not rise at the same rate… and well… at least 5 of these states weren’t even around in 1896.

Sounds like a job for the SwimSwam intern working on her PhD in stats.

You could adjust for gold medals per X population, like 1 gold medal for 10,000 residents. Of course that would favor gold medals won in early Olympics when the population was much smaller, but I guess that’s kind of the point isn’t it?

With Minnesota being as high as it is on the list, I gotta think we would do even better on a per-capita basis.

Alternate response to this article: Minnesota and Wisconsin can’t possibly be tied so this is all junk.

Think of all those Wisconsin speed skaters like Bonnie Blair.

Yeah, it’s not clear, unless I missed it, that Winter Olympics are included, but I assume most of Minnesota’s are from the Winter games. It would be interesting to see these numbers broken out by Winter & Summer.

Texas is a big state for sports.

But football is king, so some potential Olympic athletes probably lost to football.

There are 49 states+DC ahead of Wyoming, yet they still rank as #40…