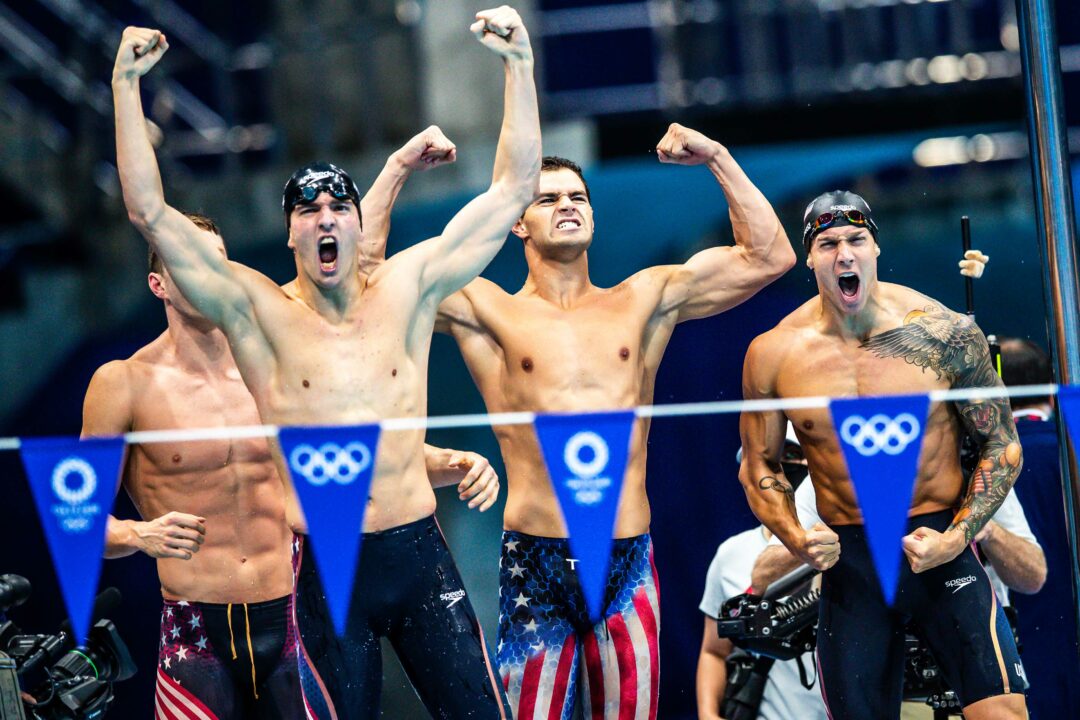 The United States topped the medal table for swimming in Tokyo with a total of 30 medals, while Australia came in second overall with 20 total. Current photo via Jack Spitser/Spitser Photography

The final night of pool swimming competition wrapped up in Tokyo with the US and Australia sweeping the gold medals for the session.

American Caeleb Dressel was responsible for two of those gold medals, winning the men’s 50 freestyle and teaming up with Ryan Murphy, Michael Andrew, and Zach Apple to claim the top spot in the 4×100 medley relay.

The US women also won a silver medal on the women’s 4×100 medley relay to round out the country’s medal total with 30. Although the US did not win as many medals as they did in Rio, the team still led the swimming medal count by 10 medals over Australia.

Australia saw both of its victories on the women’s side as Emma McKeon won the women’s 50 freestyle in an Olympic record time, and the women’s 4×100 medley relay finished first ahead of the US. For McKeon, her victories give her a total of 7 medals for the Tokyo Olympics, tying her for the most medals ever won by a woman at an Olympics in history.

The aforementioned Dressel led all men at the competition with a total of 5 medals, all of which were gold.

Denmark earned its first medal of the competition via Pernille Blume’s 3rd place finish in the 50 freestyle, as did Sweden with Sara Sjostrom’s second place finish.

People got really upset with me for pointing out that Australia has more swimmers in year round swimming than the USA. Swimming is their biggest sport if you count men and women together. It’s not in the top 10 for USA. Very impressive we continue to dominate. A testament to the American spirit.

I am curious if you have a source for your data.

https://www.statista.com/statistics/191621/participants-in-swimming-in-the-us-since-2006/ That link shows you a fair comparison to Australia. Unfortunately swimming Australia doesn’t show their total swimming membership numbers. The Australian numbers you have used include people who may swim for fitness and children learning to swim

Most of that is leisure swimming not competitive swimming. So people just splashing about at the beach and local pool.

You’re not making an apples-to-apples comparison. Swimming Australia is using an “all swimmers” number. The USA Swimming number is just a “members of the mostly-youth competitive swimming organization.”

20% of the Australian population are definitely not active and registered competitive swimmers. This would include the octagenarians at your local YMCA, Masters swimmers, summer leaguers, triathletes, cross training marathoners, etc.

These numbers are always fudged by the trade orgs that benefit from professing the economic impact, but the more apples-to-apples number in the US is like 25 million+

Interesting. Does Australia have a similar organization to USA swimming? What are the numbers for that group? I have a friend from Australia who assured me it is the biggest sport there.

Your friend from Australia is mistaken. Less than 5% of the population would be able to name half of our Olympic swimming team.

They may be able to name the ones they see on the tv this week. Maybe.

This is the Donald trump way, just make facts up & just hope enough people believe in you BillyBob.
The trouble for you mate is that you have people here who live & breathe in Australia & though we are very proud of our Olympic swimmers & outside of Titmus, Cate Campbell & Chalmers, most Australians prior to Olympics could not have named another swimmer.

We have 4 codes of football, Cricket all far bigger sports then swimming.

Australia has 90K registered swimmers, USA has 400k. End of silly discussion
https://www.swimming.org.au/about-us-3.
US has about 27M people who swim
https://www.statista.com/statistics/191621/participants-in-swimming-in-the-us-since-2006/

I assume you have looked at abs statistics which say that swimming in Australia has a high participation rate. However this is not the number of people who actually compete in competitive swimming through clubs.

I’d say you are wrong. Football and netball and cricket and soccer are way more popular in Australia. You saw in some events we didn’t have qualifiers. We only took 35 swimmers. Didn’t USA take 50 something?

Yes. That’s not what I’m talking about though. AUS has more swimmers on the whole, thus more to choose from. People act like it’s surprising that Australia gets a lot of metals but they actually should do better than the United States when you consider how many people they have swimming in their country.

They do not. There are more people in the USA who swim for fitness than Australia’s entire population.

You are absolutely kidding yourself.

In 2018, 27.5 million Americans said that they participated in swimming https://www.statista.com/statistics/191621/participants-in-swimming-in-the-us-since-2006/

Australian population is 25.5 million. Even using your number of 5 million, USA has almost 6 times as many swimmers than Australia. Why don’t you have 6 times as many medals?

This is embarrassing. Maybe people get upset with you because you’re so obviously wrong and you keep making these same comments.

80% of Australians live 50 km from the shoreline and our summers are hot so there are a lot of people who might swim recreationally, go to the beach/pools on a hot day but it’s not exactly the quality competitive environment of the NCAA. Participation numbers are also skewed by swim classes being mandatory for young school kids but it’s more about water safety, learning to tread water and float than stroke technique, starts and underwaters.

If you want to see how popular swimming is outside the Olympics look no further than the fact that the 2019 world champs were not televised anywhere on Australian TV, free to air or otherwise.

Billy Bob talking out of his arse just to trash Australia in a thread about Australia.

Very American
Americans need an enemy
They need someone to hate

Not going to lie: that one hurt as an Aussie since we had the top 3 times in the world going into it, but have to be happy for Tunisia. That gold medal probably means the world to them.

There is always a next time mate 🙂 I know it hurts when the expectations are high and swimmers do not deliver.

And happy that we got an actual competition in many races..

Doubles total medals is great. Tripled number of golds is even better.

I’m already getting excited for the ISL and world championships!

What is peoples opinion on Australias super tough qualifying standards, and resultant ‘small’ team? Coupled with the late trials, seems to have worked very well.

I am happy that we use tough standards, but I also think there should be a little leeway. Dekkers made the FINA A cut in the qualifying period (just not at trials) and her PB would have been fifth in the 200 fly final. There’s a solid chance she could have swam a new PB and been in medal contention as well.

However, it seems like the smaller team has really added some camaraderie which makes a difference.

Re the late trials, I am 100% for them. Not everyone matched their trials times, but we were waaaaay closer than other Olympics.

Exactly, the only ones that missed out that may have benefited from the experience, swimmers like Lizzy Dekkers, Sam Short & maybe Jen Forrester.

This was Australia’s first time (Olympic) had trials so close to Olympics, only Titmus in 400 & above swam faster at trials then Olympics.

Maybe we should do top 2 at trials plus time hit in qualifying window?

Yes. I think if you’re top 2 at trials, and have met both criteria (FINA A cut and would have made the final at worlds) at least in the qualification period (even if you don’t necessarily hit that at trials) you should be given a chance. Particularly for those young ones who have never been to an Olympics before because it would give them some great experience.

I think late trials were beneficial.

21 countries taking home a medal compared to 18 in Rio. Is 21 a record for the Olympics?

If Emma McKeon was a country, she would be 14th on the overall Olympic medal tally right now. Dressel would be 9th 😳

Not really. In this case only individual medals count.

That settles it then.