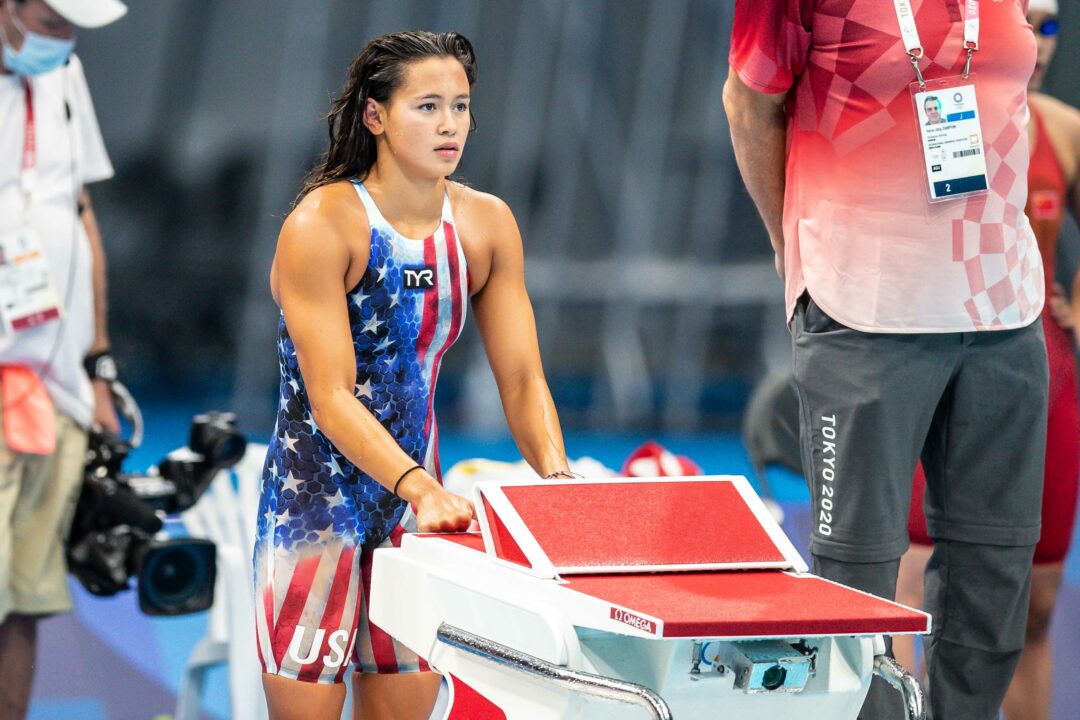 Rather than racing in the mile tonight, Olympic Silver medalist Bella Sims (Sandpipers of Nevada) is racing the girls 100 free and 200 fly.

Sandpipers of Nevada stars Bella Sims and Katie Grimes are both facing a grueling double tonight. The pair of freestyle Olympians are slated to race both the women’s 500 free and 200 IM tonight. They handled the double well this morning, both clocking 4:39 500s, then going on to swim within 2 seconds of their best times in the 200 IM. Sims is the favorite in the 500 free, entering the meet with a personal best of 4:32.13, which is 5 seconds faster than Grimes’ personal best.

It will be a much tougher battle in the women’s 200 IM, where Fox Valley park District’s Leah Hayes led the field this morning in 1:56.39. The top 5 swimmers in the A final tonight all have personal bests of 1:56, so the race could legitimately be anyone’s to win tonight.

Maximus Williamson, a 15-year-old out of North Texas Nadadores made waves this morning, tearing to a 1:44.75 in the men’s 200 IM for the fastest time of the morning. Williamson is now the fastest 15-year-old of all-time, and the #7 performer all-time in the boys 15-16 200 IM. He’ll be pushed by iNspire Swim team’s Nate Germonprez tonight.

These Sandpipers of Nevada girls are really just something else. The Sandpipers swept the podium tonight, and, honestly, I don’t really know where to begin.

Olympic Silver medalist Bella Sims led the race wire-to-wire, holding off a late charge by teammate Katie Grimes. Arguably the most astonishing thing about Sims’ race might be that it wasn’t a personal best. She was right there, touching just 0.15 seconds off her best of 4:32.13, which ranks her #2 all-time in the 15-16 girls age group, behind only Katie Ledecky.

Sims took the race out HARD, splitting 50.78 on the first 100, and flipping at the 200 mark in 1:46.31. Grimes took the race out a touch more conservatively, and was able to out-split her teammate through the back half of the race.

For Katie Grimes, the performance was a huge personal best, chopping down her previous mark of 4:38.26. Grimes is now the #3 performer all-time in the 15-16 age group with the swim.

We can’t forget about 14-year-old Claire Weinstein, who held her own in this final, pulling away from the rest of the field on the back half. Weinstein just obliterated her previous best of 4:42.27, which she had just swum this morning. Her race this morning was a personal best by 2 seconds. Weinstein is now the #2 performer all-time in the 13-14 age group, behind only Katie Ledecky.

In an electrifying race, Rose Bowl Aquatics’ Rex Maurer and Swim Neptune’s Keaton Jones went at it, leading both boys to massive new personal bests. It was Jones who got out to the early lead, pushing the pace with a 47.55 on the first 100, and 1:38.50 split at the 200 mark.  Maurer then turned the jets on, systematically closing the gap on the back hald.

Matthew Chai swam a lifetime best of 4:17.05 to earn his spot on the podium, chipping half a second of his previous best. 16-year-old Lucas Cooper out of Lakeside Aquatic Club swam a 4:18.65, making him the #11 all-time swimmer in the 15-16 age group.

Hayes was battling with Bella Sims through the first half of the race, but a 33.66 breast split blew the race wide open, and she swam away with it from there. Sims, who we should remember was just coming off her 500 free win, was still able to flex her freestyle prowess, splitting a 26.88 to narrow the gap on Hayes, but in the end, it wasn’t nearly enough.

NOVA’s Teagan O’Dell swam her 2nd personal best of the day, lowering her mark to 1:56.11. O’Dell is now the #5 15-year-old all-time in the event, coincidentally knocking off Sims for that spot.

This kid can’t be stopped this week. Maximus Williamson doubled down on his morning performance, which already made him the fastest 15-year-old all-time by a full second, and dropped another 1.59 seconds. The North Texas Nadadores upstart took control of the race on backstroke and never really looked back, roaring to a blistering 1:43.16, which was just off the West meet record.

With the swim, Williamson is now the fastest 15-year-old all-time by 2.59 seconds, and is the #3 all-time performer for 15-16 boys. He displayed shocking closing speed tonight, bringing it home with a jaw-dropping 24.40 split on the final 50.

Nate Germonprez took 2nd, swimming a personal best of 1:45.18. The swim chipped 0.21 seconds off his previous best. Kyle Brill, an unattached 18-year-old in California, swam his 2nd personal best of the day to reach the podium. Brill’s 1:45.89 tonight took another chunk out of the 1:46.40 he swam this morning.

Foxjets 15-year-old Caroline Larsen clocked a 22.50 to win the girls 50 free. The swim was a personal best for Larsen, bringing her up to #15 all-time among 15-year-olds.

notably, Leah Hayes was back in action in the B final, swimming a 22.86 for 2nd. impossibly, the swim was a personal best for Hayes, brining her under 23 seconds for the first time.

It was best times all around for the podium in this event. Quintin McCarty led the way, chipping 0.26 seconds off his personal best to get the Gold. With the swim, McCarty is now tied for 11th all-time in the 17-18 50 free.

Diggory Dillingham isn’t done dropping time in the 50 yet. After his 19.88 last weekend, Dillingham turned in a 19.83 this morning. That best time didn’t stand for long, as the 16-year-old clocked a 19.52 for 2nd tonight. That swim establishes Dillingham as the #4 performer all-time in the 15-16 age group.

Lucius Brown, 17, swam a best time of 20.00 this morning, narrowly missing out on breaking that sweet sweet :20 barrier. He got it on his very next try, though, blowing through it with a 19.82 tonight.

The Sandpipers girls can also get the job done in a medley relay, who knew. Katie Grimes led the team off in a personal best of 53.28, dropping nearly a full second off her best time, which she swam about 6 weeks ago. Audrey Yu swam the breast leg for Sandpipers, clocking in at 1:02.82, and Bella Sims swam a 52.26 on the fly leg. 14-year-old Claire Weinstein anchored in 48.74, bringing it home for her team.

Never seen an elite 500 swimmer with .55 reaction time. Speaks to why Sims is so good at so many events. Truly special talent with an incredible willingness to do the work.

Why is USA Swimming’s live stream always SO awful. You would think they would have this figured out by now.

WOW 4:32 from Grimes, I expected her to break Regan Smith’s meet record but this is just insane

I know they grind out the yards out there but man are they good at what they do!