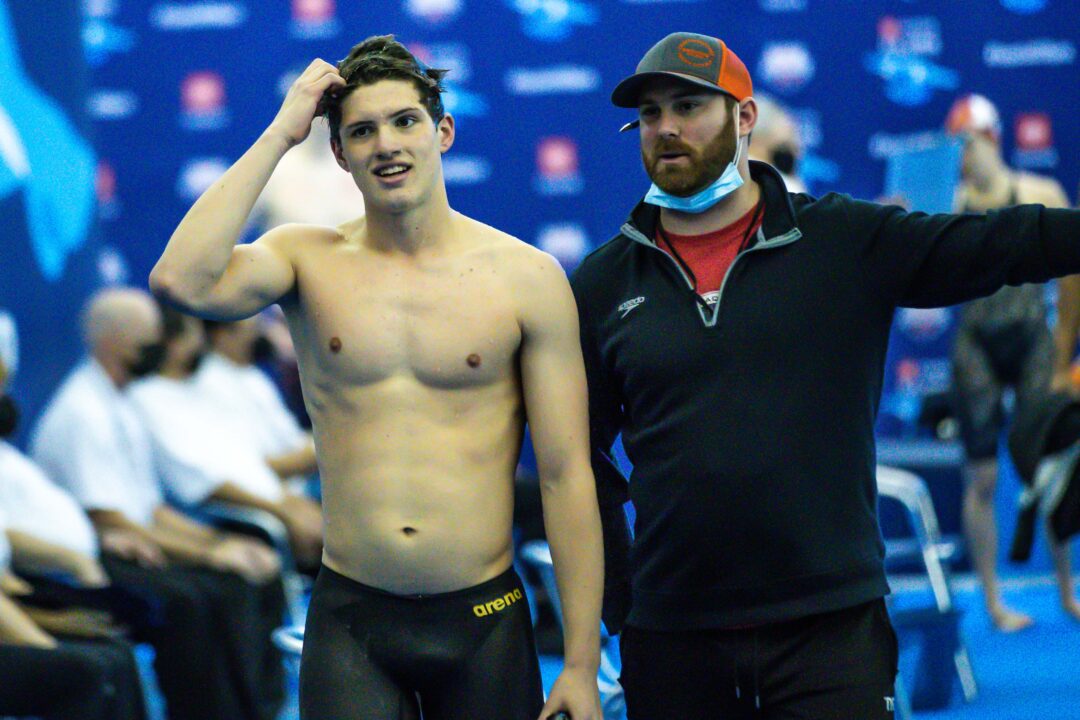 Thomas Heilman led prelims with a 19.96 in the boys 50 free, inching towards yet another NAG for the 14-year-old star. Current photo via Jack Spitser/Spitser Photography

Heilman broke his 13th NAG today in the prelims of the Winter Junior Championships (East). He’ll have the opportunity to lower the time even more in finals.

Kaii Winkler jumped up to the fifth-fastest 100 freestyler ever among 15-year-olds after his time at Winter Juniors prelims.

Cavalier Aquatics 14-year-old Thomas Heilman can’t be stopped. The rising star swam a personal best of 19.96 in the boys 50 free this morning, taking the top seed for tonight’s final. With the swim, Heilman has potentially set himself up for yet another 13-14 boys NAG. Michael Andrew currently holds the record at 19.76.

Standout IMer Baylor Nelson is the top seed in the boys 200 IM after turning in a 1:44.77 this morning. He was just 0.31 seconds off his personal best in the event, setting himself up nicely for a best time performance tonight. The girls 200 IM A final is incredibly tight, with just 1.41 seconds separating the top seed and #8.

In a thrilling first A final of the night, Club Wolverine’s Hannah Bellard got out to the early lead, pushing the pace. Bellard flipped in 53.78 on the first 100, and clocked a 1:51.05 split 200 yards into the race. Sarasota Sharks 16-year-old Michaela Mattes made her move, however, pulling even with Bellard halfway through the race, then building a lead over the back half.

SwimMAC Carolina’s Logan Zucker established himself as the leader early, and pulled away from the field as the race progressed. 4:19.46 marks a huge swim from Zucker, who already swam a personal best of 4:21.40 this morning in prelims. Zucker, a future Michigan Wolverine, will be able to head to Ann Arbor next fall as a sub-4:20 500 freestyler.

Tac Titans’ Lance Norris turned the jets on late, blasting a 51.54 on the final 100 to move from 4th to 2nd, touching the wall just ahead of Sarasota Sharks’ Liam Custer. Notably, both Norris and Custer were off their personal bests. Custer has been as fast as 4:18.49 back last December, while Norris has been 4:20.04, which he swam last month.

SwimAtlanta’s Sebastien Sergile was in position for a top 3 finish right up until the end of the race, but Norris’ late boost was enough to bump the 17-year-old off the podium. Sergile touched 4th with a 4:22.04, which is a new personal best by over a second.

Carmel Swim Club’s Devon Kitchel made a statement in Greensboro tonight, completely taking over the A final of the women’s 200 IM. Kitchel used her superior breaststroke speed to split 33.53 on the breast leg of the race, which is where she took control of the field. Her 1:56.39 tonight marks a personal best by 1.30 seconds, and rise up to #42 all-time in the girls 17-18 age group.

Similarly, Greater Somerset Y 15-year-old Emily Thompson rounded out the podium, swimming a new best time of 1:58.29. The swim was a best time by just over a second for Thompson, and brings her up to #28 all-time among 15-year-olds, and #63 all-time in the 15-16 age group.

Lakeside Swim Team 14-year-old Haley McDonald took control of the B final, leading wire-to-wire to throw down a blistering 1:58.08. Not only would the swim have finished 3rd in the A final, McDonald blew away her previous personal best of 2:00.55, which she just swam this morning. McDonald is now the #7 performer all-time in the girls 13-14 age group.

Baylor Nelson put together a jaw-dropping race in the boys 200 IM, swimming a new meet record of 1:42.01. The swim was good for a personal best time by well over 2 seconds, and makes Nelson the #2 performer all-time in the 17-18 age group, behind only David Nolan, who holds the NAG at 1:41.39.

Zionsville Swim Club’s Will Modglin was pushing Nelson halfway through the race, but Nelson put up a blistering 28.99 breast split, which essentially sealed the deal. He was able to bring it home in 25.17, powering himself to a new Winter Juniors Championship record.

In a very tight 50 free final, 16-year-old Anna Moesch clocked a new personal best of 22.33 to beat out Alex Shackell of Carmel Swim Club by just 0.01 seconds. Shackell, showing exceptional grit very shortly after the 200 IM final, also clocked a new best time, and picked up her 2nd Silver of the night.

Thomas Heilman did it again…although this time it wasn’t a record-breaking swim. The 14-year-old prodigy roared to his 2nd best time of the day in the 50 free, chipping another 0.13 seconds off his time. With the performance, Heilman remains #2 all-time in the 13-14 age group.

Lucca Battaglini, 16, took 2nd, posting a 19.96 to break 20 seconds for the first time in his career. With the swim, Battaglini now ties for 19th all-time in the boys 15-16 50 free. Brendan Whitfield was just 0.02 second off breaking that barrier as well.

The Carmel girls, who won the 200 medley relay last night, were back at it, winning the 400 medley decisively, breaking the meet record in the process. The 3:33.93 meet record, which was held by Fort Collins Area Swim Team, was also the 15-18 girls NAG, which Carmel also broke.

Berit Berglund led the team off in 52.09, which ties her personal best in the 100 back. Berglund was the fastest backstroker in the field by over a second, setting her team up nicely. Devon Kitchel went next, swimming a 1:00.11 breast split, which is well under her 1:01.20 flat-start personal best. Alex Shackell, swimming her 3rd race of the night, brought a 51.97 fly split to the party, under her best time of 52.54. Gretchen Lueking anchored in 49.71, just a touch under her flat-start best of 49.76.

Berglund, Shackell, and Lueking were all the fastest in the field in each of their respective strokes. Kitchel was the 2nd-fastest breaststroker.

It was a brutally tight race between SwimMAC and Mason Manta Rays, and it went down to the wire. The race was so tight that they were tied at the 100 mark. SwimMAC’s Caleb Maldari and Manta Rays’ Avery Clapp each swam a 48.35, which was a personal best for both boys as well. The race remained close through breaststroke, as SwimMAC’s Matthew Kroll split 54.36 and RAYS’ Adam McDonald 54.66.

That gave MAC a 0.30-second lead over RAYS heading into fly. Carl Bloebaum then took over for RAYS, splitting a 46.16 on fly, while SwimMAC’s Logan Zucker clocked a 47.03, giving RAYS the lead heading into the anchor leg. Baylor Nelson is just on fire tonight, as he split a very fast 42.40 for SwimMAC, taking the lead as the finish approached. Gibson Holmes anchored for RAYS in 43.49.

Carmel girls on fire! As per usual…nice set up for extending their high school record

45.7 fly split for Heilman. Is doing something special every time he touches the water

Fly and die the Spartan way

A high schooler splitting 28 on breaststroke is nuts.