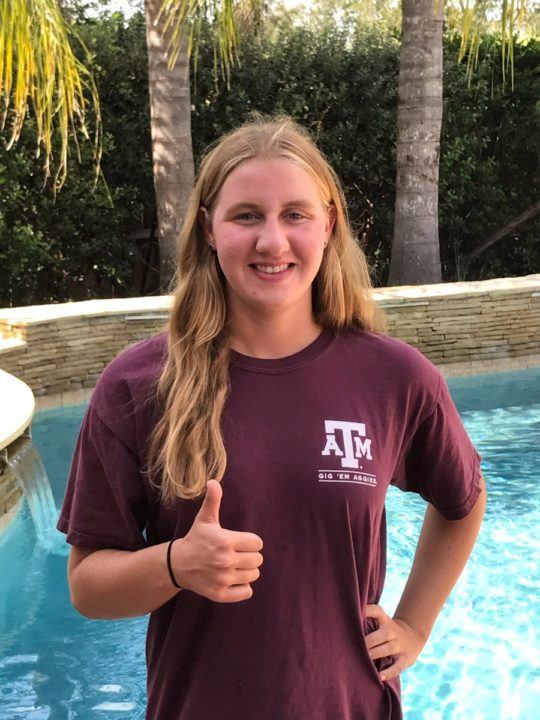 Kylie Powers is a big in-state get for the Aggies #7 recruiting class. Archive photo via Kylie Powers

Here are the 9th-through-12th-ranked women’s NCAA Swimming & Diving classes (plus some honorable mentions), with the top 8 to follow later this week:

The Trojans have landed the top distance swimmer to enter the NCAA since Katie Ledecky with Erica Sullivan, whose 15:40.42 in the mile makes her one of just two swimmers in the entire 2018 freshman class with top 8-worthy times based on yards bests. Her best of 4:38.13 in the 500 is also fantastic, and NCAA B final worthy. There are typically only a few freshmen who can score in their debut NCAA seasons, let alone A final, and thanks to Ledecky’s departure from the amateur and collegiate swimming world, Sullivan has a very legitimate shot at a mile national title as a rookie.

On the other end of the distance spectrum is Courtney Caldwell, a much-needed sprint weapon as the Trojans struggled to build much depth around elite Swedish sprinter Louise Hansson and pure sprinter Marta Ciesla. Caldwell only has two seasons left, so there’s some devaluation there, but as a 21.99/47.74 sprinter, her individual and relay contributions will be huge. Most importantly, though, is the fact that Caldwell’s 51.35 best in the 100 back fills the gap left by medley lead off Hannah Weiss, who just graduated.

Jemma Schlicht and Lara Bate are both from out of the country, and their PRs come from 2015 (and more in the 2013/14 range for Schlicht). Still, Bate figures into USC’s strong breaststroke group with long course bests of 1:10.1/2:26.5, while Schlicht’s been 59.0 fly and 25.8/55.6 free. Successful yards debuts by these two could prove very fruitful for the Trojans, who have had star power the last few seasons but have been a little lacking in depth.

Immediate medley relay candidates on the scene are Emma Carlton of Washington and Kylie Powers from in-state. Carlton’s skillset is reminiscent of Mizzou senior Annie Ochitwa‘s: great sprint flyer, great sprint freestyler, and she can lead-off medleys if needed. Carlton’s been 52.11 in the 100 fly, one of the best fly prospects in the class, and her 23.9 flat start 50 is really exciting for the Aggies. She’s also been 22.5 in the 50 free and her 53.4 100 back isn’t too shabby, either. Powers, meanwhile, is a 1:00.4/2:12.2 breaststroker and the next name in a long line of fantastic breaststrokers to go through Steve Bultman’s program.

Caroline Theil is a 2:00/4:17 IM’er with a 2:15 breaststroke to be developed, and more sprint reinforcements are inbound thanks to in-state pickups Amanda Armstrong (22.7) and Amber Conrad (23.0).

Though she only has a year of eligibility left, Denver transfer Bailey Andison is a likely double A finalist next year for the Hoosiers in both IMs. She’s been 1:54.38 in the 200 and 4:03.09 in the 400, and the Canadian could bring in big points individually for IU. She doesn’t have the skillset to be a relay asset, but she will still be a high impact addition this year.

More breaststroke speed is on the way for IU thanks to Noelle Peplowski (1:01/2:13) and Coach Looze’s daughter Mackenzie Looze, who had huge drops this summer in producing a 1:10/2:29 breast combo in long course and an equally impressive 2:16/4:46 in the IM’s. Her yards times haven’t popped, but they sure might this year. Another nice piece to this large class is distance specialist Maggie Wallace, as she’s been 4:46/16:14 in the 500/1650.

This is an exciting time for the Wolfpack, as top-ranked pickups like Emma Muzzy and Kylee Alons are snags that we typically see go to perennial programs, meaning precisely that NC State is starting to draw attention as a high profile program and get on par with its men’s team. Putting the reputation to the side, though, Muzzy and Alons are great gets for this team. Muzzy is a 52.1/1:52.0 backstroker and 1:57.4/4:06.7 IM’er, and in both backstrokes and the 400 IM, she’s targeted to B final at NCAAs. Alons is a 22.4 freestyler who has split sub-22 several times on FAST’s NAG record-setting relays, and she’s also a 52.6/1:53.5 backstroker, 52.7 flyer, 49.6/1:46.8 freestyler, and 1:58.4 IM’er.

Muzzy and Alons are incredibly versatile, and Alons in particular might end up being on at least four of the Wolfpack relays by the end of the year.

Meanwhile, offshore talent Sophie Hansson of Sweden, sister of 2018 100 fly NCAA champion Louise Hansson at USC, makes for another huge contributor. At 1:07.5/2:28.0 in the breaststroke, she’s the best long course 100 breaststroker in the class. This means a lot more to NC State than it might mean to other teams, though, because the Wolfpack’s lack of breaststroke elite talent really sunk their medleys and was a dual meet gap all year.

Florida transfer Makayla Sargent could make some noise with her 4:10 400 IM, and Shannon Kearney is another standout with a 53.9 backstroke.

I don’t see Courtney Caldwell on the current USC roster, any idea why?

Good catch. I did some digging, didn’t realize Rowe is Columbian?? She went 25.6 in 50 free and 26 in 50 Fly this summer. That’s a good addition for the Wolfpack.

Sirena’s mother is from Colombia, so she has dual citizenship. She represented COL at the Central American and Caribbean games this summer. Sirena transferred from Marshall after her NCAA-qualifying freshman year, but wasn’t released and as such had to sit out last year.

Steve Bultman has and will continue to be great at developing talent in College Station! All doubters should check the results (still hanging SEC championship banners)! An ASU swim fan but gotta look at what has and is happening in College Station!!