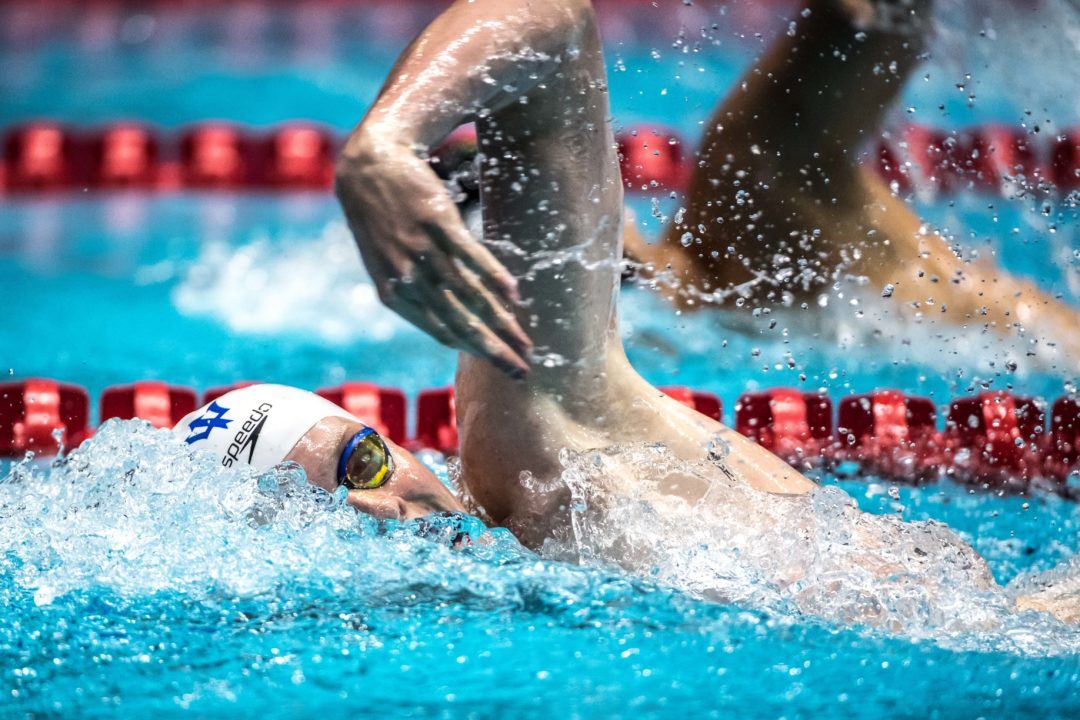 Patrick Callan is one of the best freestyle prospects in the nation, and he leads a 15-person recruiting class for Michigan. Archive photo via Mike Lewis/Ola Vista Photography

Honorable Mentions (in no paticular order)

Georgia Bulldogs: Georgia got Andrew Abruzzo, who might turn out to be the most underrated recruit in the class at the 19th rank. He’s a multi-event star who’s been way more outstanding in long course, and fits Georgia’s athlete profile to a “T.” The Bulldogs also got two good transfers (1:35 freestyler Grant Norgan out of UNLV and 53.1/1:55.0 breaststroker Jack Dalmolin from Arizona State). They’ve also got legit 200 back depth with 4 prospects (including Abruzzo) between 1:45.6 and 1:46.8.

Minnesota Golden Gophers: 51.5/1:53.5 breaststroker Max McHugh would be the star breaststroke recruit of any class that didn’t have an all-time blue-chipper at the top. There’s not a lot of depth behind McHugh in this class right now, but Minnesota brought in some intriguing prospects in their go-to events: diving and breaststroke. Divers are notoriously tough to project, but the Golden Gophers have typically had great success and could very likely get big NCAA points out of Aiden Werner and Ryan Philip. Useless fact: the Gophers also loaded up on Aidens, with three freshman going by that name in various spellings

Harvard Crimson: Harvard prospect Jake Johnson (3:46 in the 400 IM, 1:46 in the 200) was originally among our top 20 recruits in the class before we re-ranked, and Simon Lamar (15:01 in the mile) is probably one of the best few swimmers not ranked. The Crimson also added European Junior champ Umitcan Gures (52.5 long course 100 fly) to what could be a really high-upside class.

NC State is always seeming to reload its sprint corps, and the top addition this year is Dutch sprinter Nyls Korstanje. His most exciting time is probably a 48.8 long course 100 free, which suggests he should be a solid option in both the 100 and 200 short course freestyles. Korstanje is also 22.38 in the 50 meter free and is a great pickup to fill in for the graduated Ryan Held.

Poland’s Rafal Kusto is a 1:02/2:14 long course breaststroker. He doesn’t yet appear on the Wolfpack roster, but we’re told by the team that he’ll be joining the program for the second semester, as a number of international swimmers tend to. He’s a great pickup, though harder to project because breaststroke does tend to be more hit-or-miss in long-course-to-short-course conversions based on the raised value of pullouts and the importance of stroke timing into each wall.

The rest of the class is solid. Healy and Wiltsey are home-grown products who have a shot to contribute down the road. Moranetz is good breaststroke insurance for Kusto and Mullens could flourish in this storied sprint program.

The Aggies absolutely mined their home state with an almost-entirely Texas class that has some serious talent. Shaine Casas is a do-everything talent coming off a massive summer. He’s currently 47.1 in the backstroke and 47.3 in fly, both within striking distance of the best in the class. But it’s fair to project even bigger drops after Casas went 54.5/1:58.6 in long course backstroke and 52.69 in long course fly this pas summer. His meters freestyle swims (22.7/49.9/1:51.6) also suggest he could have a bigger impact than his 20.1/44.3/1:39.1 short course bests.

Clayton Bobo was a top-20 recruit in our original ranks, and fell out of the top 20 only because of fast risers like Casas. He’s got great freestyle range (19.9/43.5/1:37.5) and is a pretty good flyer, too. Coco Bratanov is a Texas high schooler who also competes for Bulgaria, and he’s like Casas in his versatility. A 1:45.2 IM is maybe his best calling card at this point, but 54.4/1:57.4 in the breaststrokes is nothing to sneeze at, either. 20.0/43.9/1:37 in freestyle means Bratanov could be a multi-relay threat early on.

This is a huge class for the Wolverines, and one with a very solid argument to rank higher than 9th. Patrick Callan is one of the best values in the class, already boasting NCAA scoring times in the 200 (1:33.52) and 500 (4:13.78) frees. He’s good enough to swim down and contribute on relays in the 100 (43.9) and projects as a great fit for a Michigan team that has some outstanding freestylers returning.

Will Chan is another breaststroker who doesn’t get the cred his times (53.4/1:58.9) deserve because of how loaded this class is in breaststroke nationwide. Spencer Carl was a top-tier recruit for Louisville a year ago, but didn’t have a productive freshman season. He brings some big potential (47.6/1:44.1 fly, 1:36.3 free) to Michigan with three years of eligiblity remaining.

Why does Will Chan only have 3 years of eligibility remaining?

I believe the 3 years remaining is referring to Spencer Carl

Even though my moniker doesn’t indicate it, I am an A&M Swim fan as well as an ASU Swim fan. That being said, I would like to believe your prediction “holds fruit” but I’m looking for that 4th freshman who has the potential to go under 20 (or come close to it). Bobo has done it. Not sure if any of the others have as yet. Casas & Bratanov are likely candidates but I don’t see the 4th man in the equation yet! Hope your prediction comes true though!
Gig em👍

They are probably referring to relay take offs

I really think that NC State should be moved up a little higher in the rankings. They really have a strong class in the sense that they have TONS of potential. This is just another perfect case of NC State Coaches finding the absolute best swimmers out there

That’s actually a good point, no other recruiting classes have TONS of potential

Honestly I think that the NCAA/ ACC results of the past couple of years prove that the recruitment rankings of NC State are extremely underestimated.

Ok let’s be real. This class does have an incredible amount of potential. I know all of the teams have extremely strong individual recruits, but no other team has such overall potential. Look at this class two years down the road and I guarantee it will be ranked top 5 in the nation.

You might want to wait to see the top 5 classes before you put any money behind that guarantee. This NC State class is very good (we just ranked them 11th in the entire nation, after all). But the top 4 classes in particular are scary good.

Couldn’t agree more with you ncstateswim. NC State has an incredible reputation of churning out elite athletes. They should be ranked higher given the quality of swimmers they consistently produce. Very few other colleges are able to have that consistent success rate.

5
-5
Reply
JP input is too short
Reply to  swimjack

UCSD is just starting to transition so I don’t believe they will be able to swim postseason for a few years.

What happened to Tomoe Zenimoto Hvas, don’t see him on UNCs roster, coming at semester or did he recommit?

A lot of internationals don’t arrive until the second semester. We’ve got an e-mail in with UNC – no official word yet, but that would be my guess.

Jack Dubois is the name that should be instead of “Kyle Dubois.” I think Mizzou’s class will be very exciting.

I agree that Patrick Callan looks like a really solid recruit for MI. Looking forward to seeing him this season!!

11
0
Reply
Someone
Reply to  gator

As someone whos known Pat for a while, he’s gonna be really good :))

You can’t make a more perfect athlete for UGA than Abruzzo. Plus he will train with Litherland and Kalisz for the next few years. He might just be the top guy in the class when it’s all said and done